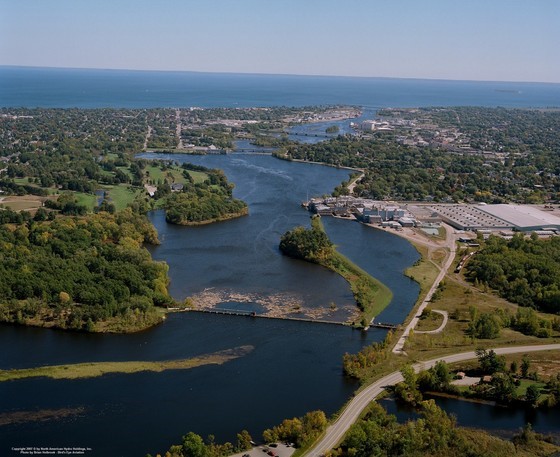 MADISON, Wis. - After 30 years of pollution cleanup and restoration efforts, the Lower Menominee River Area of Concern has been removed from an international list of the 43 most polluted places on the Great Lakes. This AOC is Wisconsin's first of five to be delisted.

The Wisconsin Department of Natural Resources (DNR) and the Michigan Department of Environment, Great Lakes and Energy (EGLE) provided the U.S. Environmental Protection Agency's Great Lakes National Program Office with a final delisting report summarizing the cleanup and restoration actions. As part of the delisting process, Wisconsin and Michigan held a public comment period from March 9 - April 24, 2020 and hosted a public meeting on April 9, 2020. The EPA has taken the final step with the U.S. and Canadian governments to officially remove the AOC designation.

"This is a significant step in the work that the DNR does to ensure that Wisconsin provides clean, safe water to its communities," said DNR Secretary Preston D. Cole. "We will continue to work with regional and community partners to ensure that Wisconsinites have access to clean water and that businesses can thrive in areas not endangered by toxic pollution. Cleaning up these toxic hot spots is a priority across our state for both our public health and economic future."

The international Great Lakes Water Quality Agreement between the U.S. and Canada was amended in 1987 to create an Areas of Concern program to restore Great Lakes, rivers and harbors most severely damaged by pollution and habitat loss.

Michigan's Upper Peninsula and northeastern Wisconsin meet at the Menominee River, which flows into Lake Michigan's Green Bay. Environmental harm from historical pollution by coal tar, paint sludge and arsenic earned the lower three miles of the river and the Green Bay shoreline - three miles north and south of the river mouth - an AOC designation.

"This delisting proves the value of partnerships not only among government agencies but also with the community, which helped to guide us along the way in deciding important next steps in the cleanup of the Lower Menominee River area," said Liesl Clark, director of the Michigan Department of Environment, Great Lakes, and Energy. "Through persistent efforts at the state and federal levels and continuous input from those who live and recreate on the Lower Menominee River, the partners were able to develop an effective plan for remediation and long-term monitoring so that this valuable asset is once again something the community can safely enjoy."

Sources of pollutants were controlled by improving industry practices and removing contaminated sediments within the boundaries of the AOC. Cleanup efforts took place at the Lloyd Flanders paint sludge site from 1993 through 1998, where 30 million pounds of hazardous waste and contaminated sediment were removed from Green Bay.

In addition to pollution cleanup, many habitat restoration projects were completed in the AOC. For example, fish passage was restored over the Park Mill and Menominee dams in 2016, returning a 21-mile stretch of prime spawning habitat for lake sturgeon. More than 133 acres of shorelands, wetlands and uplands were restored at Menekaunee Harbor and the South Channel, providing vital habitat for fish, birds and other wildlife.

Menekaunee Harbor is now cleaner, deeper and able to accommodate recreational and commercial fishing boats. As a result of this cleanup effort, the harbor was chosen as one of the sites for Cabela's 2017 and 2019 National Walleye Tours - events that contribute to the revitalized economic prosperity of the area.

"We are grateful for the contributions of many partners over the years in cleaning up and restoring the AOC," said DNR Office of Great Waters Director Stephen Galarneau. "We especially thank the local community partners who participated in the Citizens Advisory Committee and Technical Advisory Committee. We are also grateful for the collaboration with the cities of Marinette, Wisconsin and Menominee, Michigan as well as the state of Michigan."

Significant funding for the pollution cleanup and restoration work was provided by the federal Great Lakes Restoration Initiative administered by the EPA. Wisconsin and Michigan share responsibility for the river's rehabilitation. The states have worked closely with local citizens, businesses and other agencies to address the pollution and habitat loss.

"The AOC pollution cleanup and restoration are significant accomplishments by people who have worked for decades to reconnect with their river and Great Lakes harbor to create a brighter economic, ecological and recreational future," Galarneau said. "The relationships forged through the AOC cleanup also set the stage for additional environmental restoration, remediation and revitalization as partnerships among many stakeholders will be essential for continued stewardship of these waters."

To see how the Lower Menominee River AOC was restored, watch the video here.