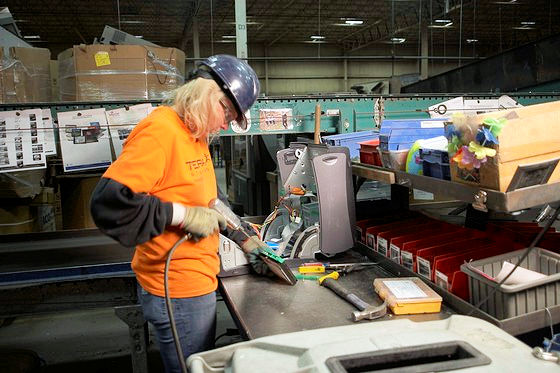 MADISON, Wis. - During the first 10 years of Wisconsin's electronics recycling program, state households and schools recycled 325 million pounds of TVs, computers and other consumer devices, according to the latest data from the Wisconsin Department of Natural Resources.

Wisconsin's electronics recycling law was enacted in 2009 with goals of preventing pollution from toxic materials found in many older electronics-including lead, mercury and other heavy metals-and conserving valuable resources.

To accomplish these goals, the law created E-Cycle Wisconsin, a manufacturer-funded program administered by the DNR that helps support a statewide network of electronics collectors and recyclers. The program began collecting electronics in January 2010.

The law also banned landfilling or incineration of many types of consumer electronics, such as TVs, computers, monitors, printers and cellphones. The disposal ban took effect on Sept. 1, 2010.

"We've come a long way in the last 10 years," said Sarah Murray, E-Cycle Wisconsin coordinator for the DNR. "There has been a lot of growth in our state's electronics collection and recycling infrastructure, which supports hundreds of jobs. Most households have better access to electronics recycling than they did 10 years ago. We want to build on those successes to make E-Cycle Wisconsin work even better going forward."

A newly updated infographic highlights some of E-Cycle Wisconsin's successes and challenges during its first 10 years. The DNR has also released a new "What Happens When We E-Cycle?" video to show how the electronics collection and recycling process works.

One of the program's biggest challenges remains improving consumer awareness of electronics recycling options. A 2018 DNR survey showed most Wisconsinites have been complying with the electronics disposal ban. Still, many are storing unwanted devices because they are unsure of how to recycle them or lack convenient and affordable recycling options.

"As we mark the 10th anniversary of the electronics recycling law, we want to encourage everyone to think about the old electronics in their homes-cellphones in drawers, laptops in closets, TVs in basements-and visit our website to learn how and where to properly recycle them," Murray said. "Join your friends and neighbors in making sure the materials in these devices are handled safely and put back into productive use."

The DNR maintains an E-Cycle Wisconsin collection sites list, which allows residents to map nearby collection sites or look up locations by county. It also includes information on manufacturer mail-back or trade-in programs, many of which are free.

An E-Cycle Wisconsin media toolkit is available with content for use by media here.