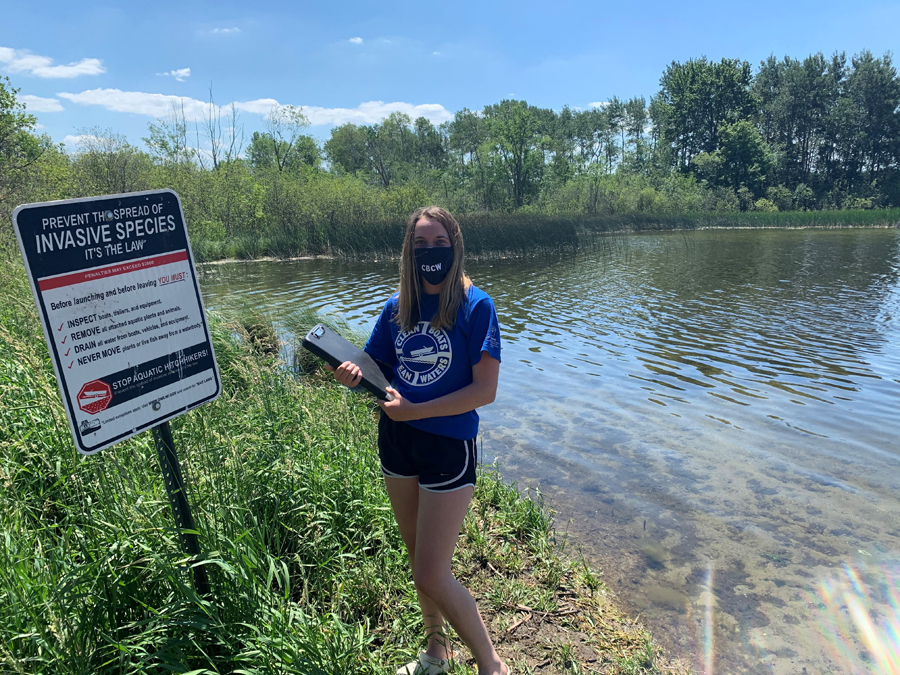 MADISON, Wis. - Wisconsin residents and visitors who are passionate about protecting our waters from aquatic invasive species know the impacts they can have on state waters and native species. For nearly 15 years Clean Boats, Clean Waters (CBCW) boat inspectors and educators have met boaters at lake and river launches to remind them that by taking simple preventative steps, they play a vital role. This summer, hundreds of launches will be staffed as usual by these friendly folks in their blue CBCW T-shirts, but most will also have on a cloth CBCW mask and maintain physical distancing.

"We know that the prevention guidance of inspect, remove, drain, never move is effective at preventing the spread of invasive aquatic plants and animals," said Erin McFarlane, the Statewide CBCW Educator with the University of Wisconsin-Extension Lakes Program. "Taking a minute or two to remove all the plants, animals, mud and debris from your boat and trailer while draining water from the bilge and live well is all it takes to prevent a new invasive species from establishing in your favorite lake or river."

Surveys of Wisconsin boaters and anglers show that most boaters perform these actions nearly every time they are on the water. However, infrequent boaters may not be aware of the prevention steps and even frequent boaters might forget. McFarlane notes that if CBCW staff are not at a launch, boaters can support each other by modeling good prevention behavior."Every boater and angler has a role to play in protecting our lakes and rivers. We're thankful for people currently doing their part," she said.

There are some changes to the special CBCW campaigns. Ice packs are normally offered to anglers and boaters in early June during the Drain Campaign to remind anglers to drain all water out of livewells and buckets before leaving the launch area. Similarly, boat towels with the "Stop Aquatic Hitchhikers!" campaign logo are typically given out during the annual Landing Blitz held during the week of July Fourth. For the health of the boat inspectors and the public they interact with, program coordinators are recommending that these free reminders not be given out this summer.

The campaigns have been merged and will take place statewide from now through July 5. Boat inspectors will still share the AIS prevention message and help boaters learn where to look for hidden invasive species on their watercraft and equipment while following safety guidelines to keep themselves and the public safe. Participation in CBCW inspections is voluntary and can take place unless the launch is in an area where local restrictions or personal safety concerns prevent it.

Following these steps helps boaters comply with Wisconsin state law, which prohibits the transport of aquatic invasive species. To learn more about invasive species and their impacts to Wisconsin's waters and economy, visit DNR.wi.gov and search "Invasive Species."