Help Protect Turtles On The Move 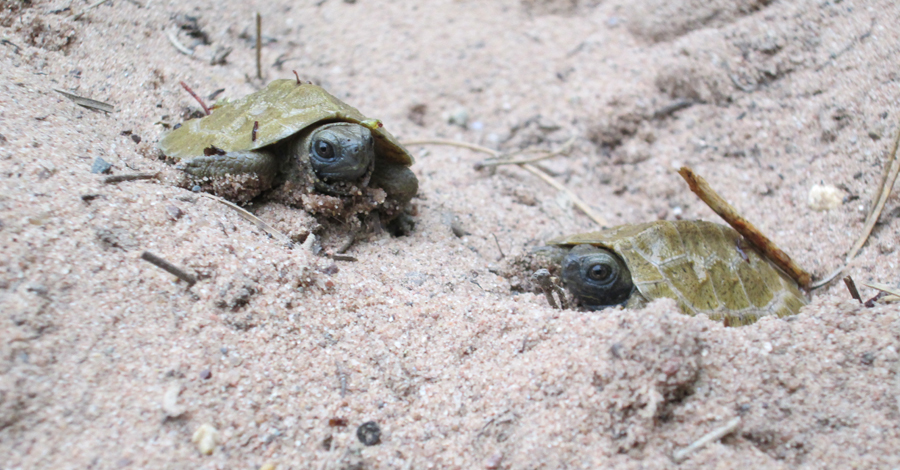 MADISON, Wis. - With a 45% increase in turtle crossing reports in the last year and a growing number of landowners taking action to protect turtle nests from raccoons, state conservation biologists are hopeful for the next generation of these hard-shelled reptiles. 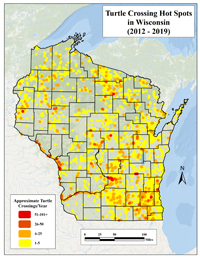 Since the DNR began requesting turtle crossing reports in 2012, the public has provided 2,903 turtle crossing location reports, with nearly 1,000 crossings identified in 2019 alone. Of those, Badje and colleagues have identified 47 locations as particularly deadly for turtles.

The public can learn how to build a cage to protect turtle nests when females lay eggs in residential lawns, gardens, or gravel driveways, in a video.

Most of Wisconsin's 11 turtle species breed in spring, laying their eggs in nests on higher ground. Turtles often cross roads to reach their upland nesting areas, and getting run over by cars is a leading cause of decline in turtle numbers in Wisconsin. Predation of turtle nests by raccoons, skunks and coyotes is another significant factor; once turtles lay their eggs they do not return, leaving the eggs and later hatchlings vulnerable.

Some species, like wood turtles, take 12 to 20 years to reach reproductive maturity, so the death of even one female turtle a year within a population can take a big toll. "Singly or combined, road mortality of adult turtles and the loss of egg clutches from nest-raiding predators can pose large problems that endanger turtle populations in Wisconsin," Badje said.

DNR staff and local advocates use the road crossing information when working with local and state highway departments to address deadly road crossings and make them safer for turtles and motorists.

"Thank you to everyone who's taken time to report a crossing or protect a nest over the years," Badje said. "Together, we're making a difference. We ask people to continue to report where turtles are crossing roads and to help protect nests on residential lawns, gardens or gravel driveways by building a nest cage."

Reports from the public also help the DNR document previously unknown populations of rare turtles, update the status of known populations and provide DNR property managers information that helps them manage for turtles in their areas. As of 2019, people have reported 69 previously undocumented populations of ornate box turtles, wood turtles and Blanding's turtles, which are respectively listed as endangered, threatened or special concern in Wisconsin. Additionally, people contributed updates on the status of another 106 known rare turtle populations.