[EDITOR'S ADVISORY: Video of the arrival of the elk in Wisconsin is now available at this link: https://we.tl/t-2hoLGlKqDJ. From there you'll be able to download the elk release video and a text file outlining the speakers and their organizations.]

MADISON - Forty-eight Kentucky elk made the 14-hour overnight ride from Kentucky and have arrived at their new home in the Flambeau River State Forest in Sawyer County. Once released into the wild, these animals will join more than 200 elk that make up Wisconsin's northern elk herd that resides in Ashland, Bayfield, Price, Rusk and Sawyer counties.

Wisconsin's elk population has grown steadily since the release of 25 Michigan elk in 1995 near the town of Clam Lake in Ashland County. The elk released this year, as well as 31 Kentucky elk released here in 2017, are providing a boost to herd growth and genetics. 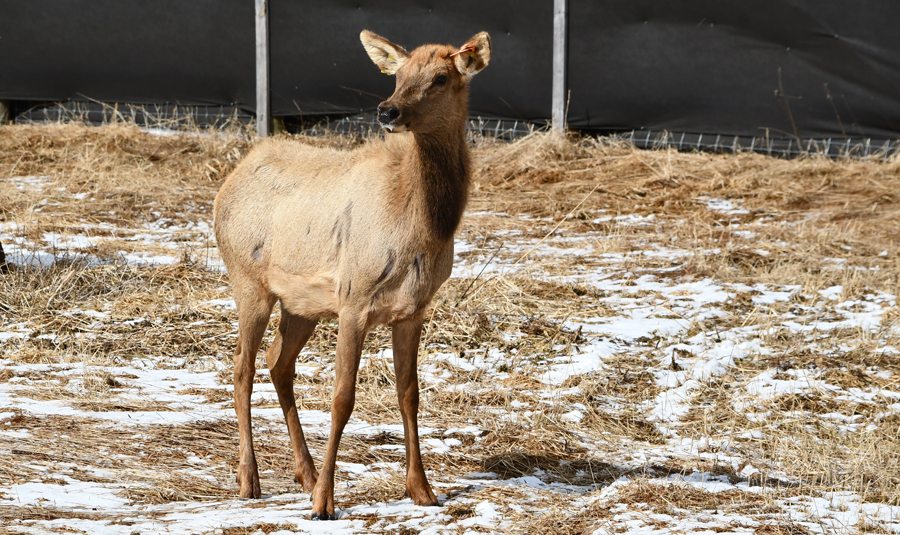 One of the newly arrived Kentucky elk cows adjusting to the quarantine pen where they are being held to satisfy health testing requirements and to allow the animals time to acclimate to the area.Photo credit: DNR

"This marks the final chapter in our translocation efforts," said Department of Natural Resources Secretary Preston Cole. "It's been a tremendous project that relied on many great partners, and we're all looking forward to seeing what the future brings for Wisconsin elk and the people who enjoy them."

"The long-term goal is someday to have a herd of about 1,400 animals in the north," said DNR deer and elk ecologist Kevin Wallenfang. "We've seen slow but steady population growth over the years, and the additional elk are already contributing to an increasing population and genetic richness in the herd."

Department staff have worked closely during the reintroduction effort with Kentucky Department of Fish and Wildlife Resources to ensure that capture efforts in the coal fields of southeastern Kentucky were successful and that the elk receive the best care possible while undergoing a U.S. Department of Agriculture-required 120 quarantine period for health testing.

"We are finishing the project with our most efficient and successful capture," Wallenfang said. "All 48 elk, most of them female, were captured by helicopter in just two days. Pregnancy testing indicates that most of the adult females are carrying a calf."

The majority of funding during the final year of the reintroduction project is being provided by the Rocky Mountain Elk Foundation. Based in Missoula, Mont., the foundation has more than 25 local chapters in Wisconsin. Since the project's inception in 2015, contributors have also included the Ho-Chunk Nation, Jackson County Wildlife Fund, the Ojibwe tribes and several other agencies, local businesses and individuals.

Now that the elk have arrived in northern Wisconsin, DNR staff are taking special precautions to help the elk become accustomed to their new home range in the Flambeau River State Forest. The elk are enclosed in a 7-acre quarantine pen to satisfy health testing requirements and to allow the animals time to acclimate to the area. Caretakers are on site to provide daily feeding and monitor of the elk and to ensure quarantine security until the elk are released in early summer.

The public is asked to avoid the general vicinity of the pen until the elk are released. Minimizing human disturbance near the release site will allow the elk to adjust to the area and will maximize the success of reintroduction efforts.

For more information regarding elk in Wisconsin, search the DNR website, dnr.wi.gov, for keyword "elk."