Working with anglers fishing the Lower Fox River, the Wisconsin Department of Natural Resources has confirmed the presence of round gobies - an unwanted aquatic invasive species -- immediately below the Neenah dam.

Kendall Kamke, DNR Oshkosh fisheries team supervisor, said the four gobies caught in recent days are the first evidence of the species in the waterway above the series of locks and dams downstream. DNR is asking area anglers for additional help to determine if the species is also present upstream of the Neenah and Menasha dams in Lake Winnebago and is coordinating efforts with the Fox River Navigational System Authority, which has closed the Menasha lock. 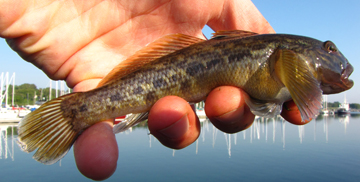 Round gobies are mottled gray and 3 to 6 inches in length.
UW-Extension Photo

Since its discovery in the St. Clair River in 1990, bottom-dwelling round gobies have spread rapidly into many areas of the Great Lakes including Lake Michigan. Round gobies can survive even in poor quality water and displace native fish by eating their eggs and young, taking over optimal habitat and spawning multiple times per season, which gives them a competitive advantage.

"The gobies represent a real threat to the valuable native species in the Lake Winnebago system - home to a world class walleye fishery, the largest self-sustaining population of lake sturgeon in North America, good populations of bass, yellow perch and other game and panfish species," Kamke said. "We are grateful to the Fox River Navigational System Authority for the partnership involved in this effort."

In addition, Kamke said, DNR is asking for assistance from anglers to help determine whether the gobies have made it above the Neenah and Menasha dams and are in Lake Winnebago or whether they may still be held in check downstream.

"We also would like to learn whether the gobies are present in other locations," he said.

Kamke said there is no way to determine how the gobies arrived in the channel below the Neenah dam, which opens into Little Lake Butte des Morts. In addition to working with local anglers, DNR fisheries and aquatic invasive species team members will continue to set traps and use shocking equipment to determine the range and extent of the population.

Gobies can be identified by a single, scallop-shaped pelvic fin on the belly of the fish, a black spot on the front dorsal fin, frog-like raised eyes and thick lips. No other native Great Lakes fish possess the single pelvic fin. They range in size from 3 to 6 inches and have a mottled gray appearance. 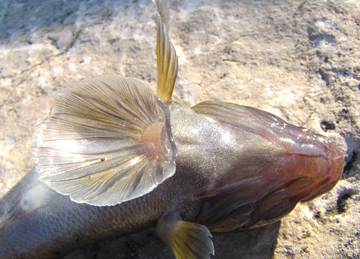 Round gobies have a single pelvic fin.
UW-Extension Photo

The gobies that have been caught so far have been taken on hooks baited with pieces of worm. Anglers who catch a goby should kill it and, along with specific information about where and when it was caught, bring it to the DNR Oshkosh office, 625 E. County Road Y, Suite 700, Oshkosh, Wis., 54901-9731. The office is open from 8:30 a.m. to 4 p.m. Monday through Friday. Due to the Labor Day holiday, anglers who catch a goby over the weekend are encouraged to freeze it and bring it in during the following week. 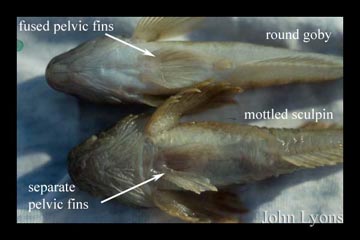 Examining the underside of a fish can help determine if it is a sculpin or an invasive goby.
WDNR Photo