MADISON - White-nose syndrome, a bat disease that has spread to 23 states and killed up to 5 million bats since 2006, has been confirmed in Wisconsin, state natural resources officials announced today. 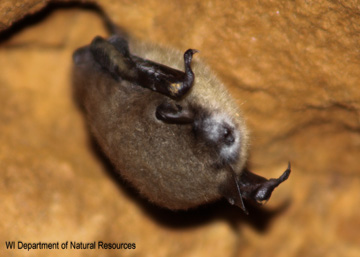 One of the bats from the Grant County mine that was confirmed to have white-nose syndrome.
WDNR Photo

Results from visual inspection and genetic and tissue tests completed earlier this month showed that 2 percent of bats in a single mine in southwestern Wisconsin had the disease, named for the characteristic white fuzz on their nose, wings and tails, according to Erin Crain, who leads the Department of Natural Resources Natural Heritage Conservation Program.

"The discovery is not a surprise but it's a sad day for Wisconsin. We face the loss of multiple bat species and the benefits they provide to our ecosystems and our people," Crain says.

"We knew this day would come because white-nose syndrome spreads rapidly bat to bat and bat to cave. With great cooperation from mine and cave owners, we took aggressive steps to prevent human spread of the disease to Wisconsin, and we think those steps helped delay its arrival by several years, allowing more time for research and to learn from other states' experiences. But we knew there would be no dodging the bullet. We now face the sad potential of bat die offs that will be felt at home and across the country."

Wisconsin is home to several of the upper Midwest's largest bat hibernation sites and historical estimates have put the population at 350,000 to 500,000 bats. Bats play an important role by eating insects that can damage forests and transfer diseases like West Nile Virus.

At this time, the discovery in the Grant County mine appears to be an isolated occurrence. DNR's visual surveys of 85 other mine and cave sites this winter did not find any other signs of white-nose syndrome, however, DNR is awaiting results from genetic tests underway from samples collected at 19 of those other sites as part of the routine sampling

White-nose syndrome is a disease of bats infected with the fungus Pseudogymnoascus destructans. It does not affect people or other animal species but causes hibernating bats to frequently wake from a hibernating state. Stirring repetitively depletes the bats' energy stores and can cause them to starve or become dehydrated before spring arrives. Up to 95 percent of bats in infected caves and mines in other states have died.

DNR bat crews had been wrapping up winter surveillance efforts for 2014 when they discovered 11 individual bats with the classic signs of white-nose syndrome in the Grant County mine. The mine is within flying distance for bats from a site in Illinois where white-nose syndrome had been confirmed in 2012.

Bat crews collected two of the bats for genetic and other laboratory testing; the results came back in early April and were positive.

The same mine had been examined as recently as December 2013 as part of a study and had no visual signs of white-nose syndrome at that time, Crain says. All four species of bats that hibernate in Wisconsin cave and mines have been documented in this particular mine during surveys in recent years.

Next steps in efforts to save bats

Cave and mine owners have been notified of the positive site in Grant County.

DNR will be meeting with its external white-nose syndrome science and stakeholder teams to discuss the finding and how best to proceed based on data collected this winter. The teams are advisory and will forward management recommendations to DNR for consideration, Crain says.

Most state caves that serve as bat hibernacula have already been seasonally closed to the public for several years as part of the measures DNR has taken to give hibernating bats the best possible chance. Several have been closed to all access to delay introduction of the disease to Wisconsin and to slow its spread. Voluntary prevention plan agreements are in place with private and public owners of caves and mines open to human access, including all commercial caves and mines. Recreational cavers also have followed decontamination procedures that prevent transmission of disease between sites.

How citizens can help, including reporting sick or dead bats

Wisconsin citizens can help bats by continuing to avoid disturbing bats, especially during hibernation; by following all decontamination requirements for those who enter caves or mines, and by continuing to volunteer to monitor bat populations in Wisconsin through a variety of different opportunities. Wisconsin's four bat cave species are listed as threatened, a status which makes it illegal to kill them or take action that would result in their death. Learn more about bats and volunteering opportunities on DNR's Bat Program website, found at http://wiatri.net/inventory/bats.

People who see sick or dead bats are encouraged to report them to DNR. DNR's Bat Program website, http://wiatri.net/inventory/bats has a link to the reporting form and instructions for how to safely collect carcasses of dead bats. People should not touch or handle bats without appropriate protective clothing.

"Now more than ever we need Wisconsinites' help to keep our bats as healthy as they can heading into next year's hibernation period and the challenges they will face," Crain says.