Effort to Aid one of Wisconsin's 48 Orchid Species Bears Fruit 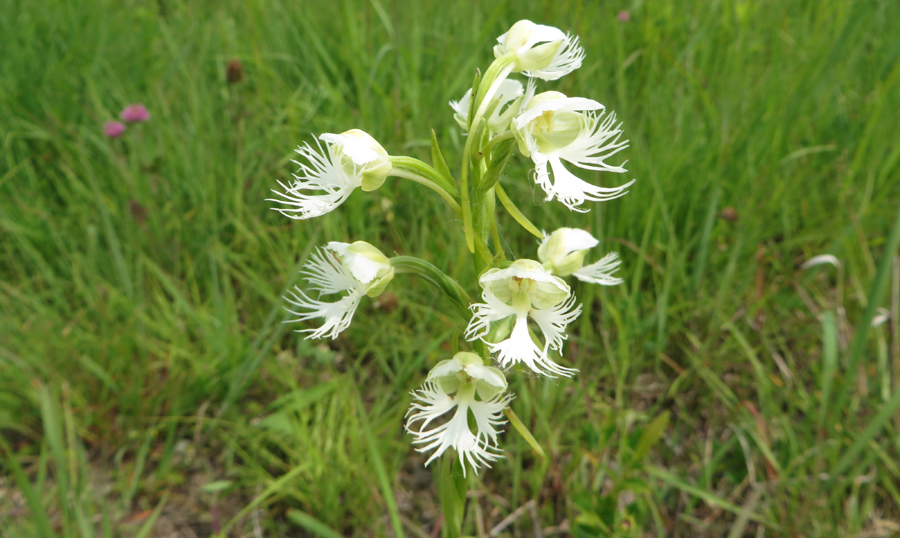 An eastern prairie white fringed orchid, one of the rarest of Wisconsin's 48 orchids.Photo credit: Rich Staffen

MADISON, Wis. - A painstaking effort by state conservation biologists to pollinate Wisconsin's rarest wild orchids by hand has paid off: all flowers pollinated by hand produced more seed than flowers left to be pollinated by insects.

The results are good news for the eastern prairie white-fringed orchid (Platanthera leucophaea), one of Wisconsin's 48 native orchids and a species considered endangered in Wisconsin and threatened nationally.

"We're very excited that our hand pollination of this rare orchid appears to be boosting the amount and quality of seed produced," said Kevin Doyle, a conservation botanist for Wisconsin Department of Natural Resources Natural Heritage Conservation program. "One hundred percent of the flowers that were hand pollinated produced large fruits with numerous tiny seeds. In multiple cases, these were the only flowers on that plant that did produce seed." 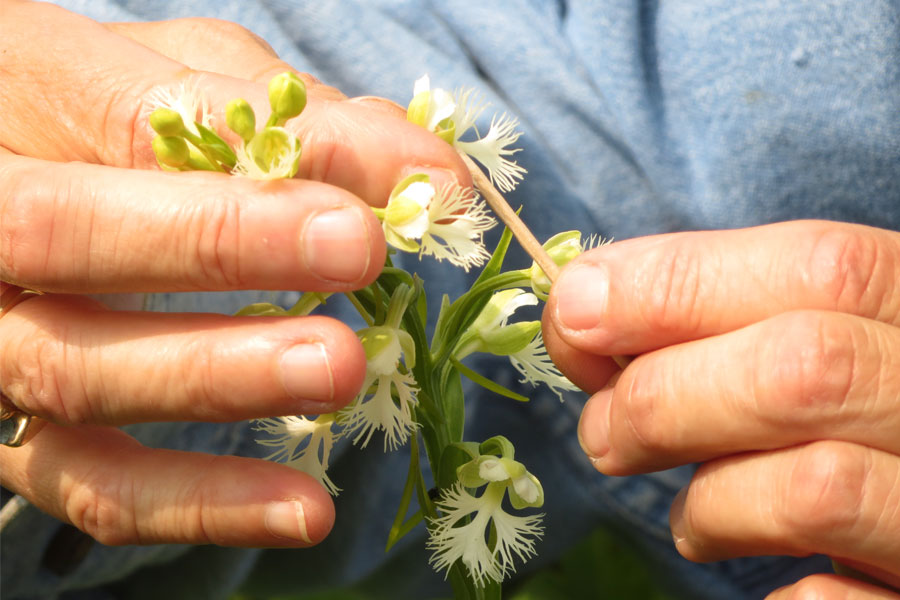 The beautiful and delicate white-fringed orchid is found in the wet-mesic prairies of southeast Wisconsin. These and other tallgrass prairie types have been reduced by well over 99% of their historical abundance in Wisconsin and elsewhere in the Upper Midwest, primarily due to conversion to croplands and pasture due to their fertile soil. Wet-mesic prairie is now globally rare and provides a critical habitat for some of Wisconsin's rarest and most sensitive native plants and animals.

Many orchids have specialized flowers, which require specific pollinators, and eastern prairie white-fringed orchid, which is pollinated by night-flying hawk moths, is no exception. As these prairies become more and more fragmented and crowded by invasive species, the hawk moths fail to find the orchids, and pollen is not moved between populations. The result is that the orchids suffer from inbreeding.

For the past two summers, NHC staff and partners have hand pollinated orchids at several State Natural Areas in southeastern Wisconsin to ensure this species is not lost from the state. Using toothpicks, the human pollinators collect pollen from blooming plants at one site and transfer it to other plants at another site.

Doyle noted that the hand pollination has successfully been used in Illinois prairies, and they are encouraged at the results thus far here, too. The true test of this project's success will not be seen for some years, though. Eastern prairie white-fringed orchids take five years to go from germinating seed to flowering adult plant. It's Doyle's hope, though, that the hand pollination efforts now will lead to more genetically diverse, more substantial and ultimately more viable populations in the future.Learn about other rare plant restoration efforts in the DNR Natural Heritage Conservation 2019 Field Notes, and learn about opportunities to get involved in DNR's Rare Plant Monitoring Program and other citizen-based monitoring programs to help rare species.