Hunters are being reminded to be on the lookout for elk and moose. Elk are now regularly encountered in Ashland, Sawyer, Price, Rusk and Bayfield counties and reintroduction efforts that began in 2014 brought elk back to Jackson County.Photo credit: DNR

MADISON, Wis. - The Wisconsin Department of Natural Resources reminds the public, and especially hunters, to be aware of elk and moose on the landscape in central and far northern Wisconsin as they enjoy fall hunting seasons. 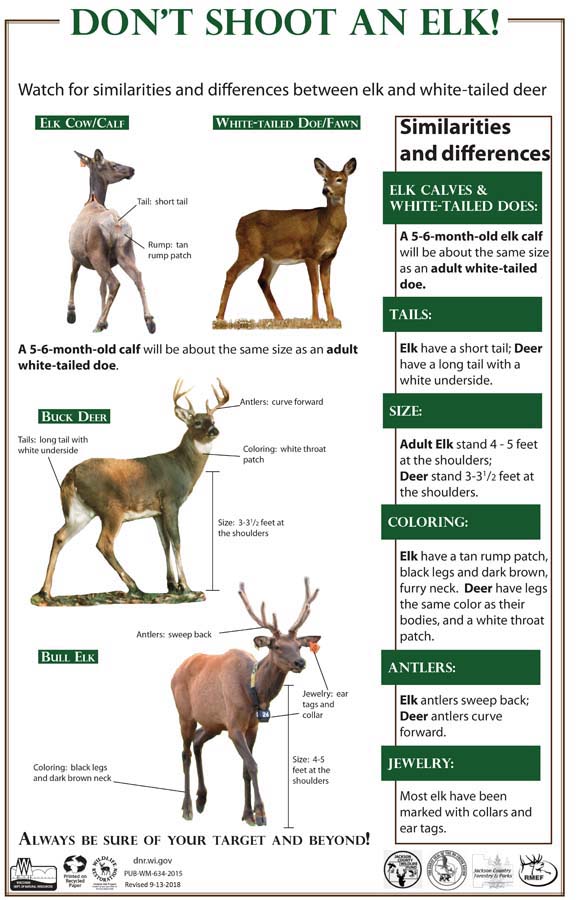 To be sure of their shots, hunters should recognize the difference between whitetails and elk.Photo credit: DNR

Hunters should always be sure of your target and what lies beyond it. This practice ensures the safety of other people, but it is also necessary to avoid the accidental shooting of non-target animals.

Elk reintroduction has occurred in two locations of the state, and the combined herds now number more than 350 animals. They are regularly encountered in the far northern counties of Ashland, Sawyer, Price, Rusk and Bayfield. Reintroduction efforts that began in 2014 brought elk back to Jackson County, and elk are seen regularly there and in surrounding counties as well.

While Wisconsin has not reintroduced moose, animals do wander into the state and even take up permanent residency as a result of successful reintroduction in the Upper Peninsula of Michigan and a native population of moose in Minnesota. Fall 2019 moose sightings have been frequent in Wisconsin's northernmost counties.