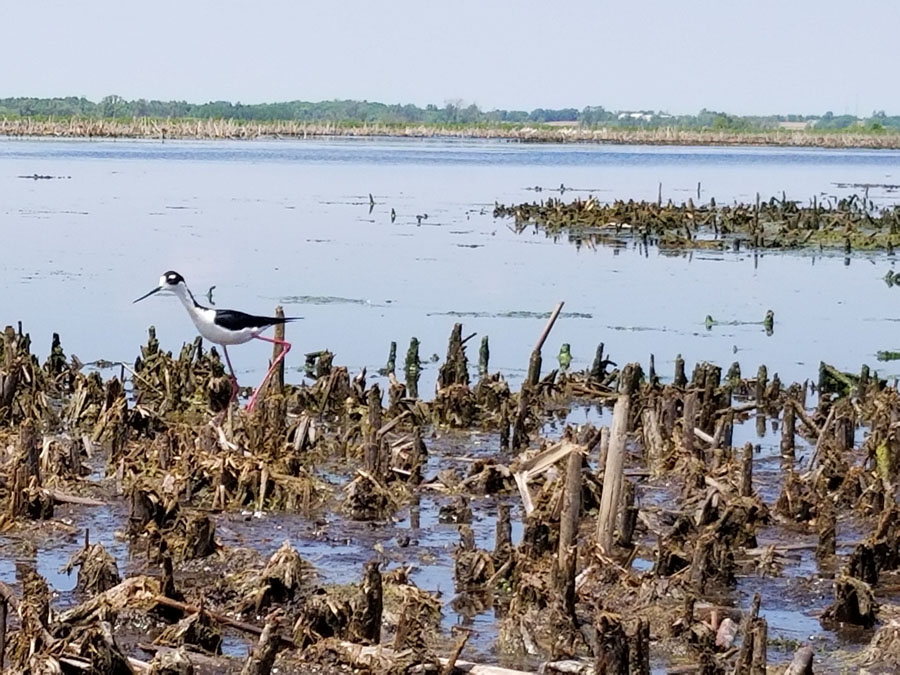 HORICON, Wis. - Once labeled an "accidental" visitor to Wisconsin, a southern breeding bird known for its long, thin, pinkish legs, needle-like black bill and aggressive calls in defense of its chicks, has now moved to Wisconsin in a much bigger way.

They looked for similar habitat and subsequently documented 31 nests, the most ever recorded in the state by far.

"We had no intention of documenting breeding black-necked stilts, so it was a nice surprise," said Sumner Matteson, the DNR Natural Heritage Conservation biologist who, along with contractor Daryl Christensen, found the colonies. "Refuge staff members were delighted by the large number of nesting stilts on their flowages."

Black-necked stilts (Himantopus mexicanus) inhabit shallow wetlands and spend much of the day wading in shallow waters to catch and eat aquatic insects, small crustaceans, amphibians, snails, tiny fish and various flying insects, according to the Cornell University Lab of Ornithology guide, All About Birds.

Black-necked stilts are known primarily as breeding birds in the Gulf Coast states. The legendary ornithologist Sam Robbins described black-necked stilts in his 1991 book, Wisconsin Birdlife, as "accidental" in the state, with the birds recorded in Racine County in 1847, and three others from Horicon Marsh in 1951, Horicon National Wildlife Refuge in 1986 and Columbia County in 1987. None of these birds were breeding here.

Nesting stilts began to appear in Wisconsin in 1999, with individual nesting pairs documented by Wisconsin Breeding Bird Atlas volunteers at the Horicon Marsh National Wildlife Refuge, and then in Jefferson County and Dodge County in 2004.

The state's second Wisconsin Breeding Bird Atlas, initiated in 2015, brought confirmation again of nesting at the Horicon National Wildlife Refuge that year, with as many as 12 birds found that summer.

That number swelled to a remarkable 63 adult birds in 2019.

"We will be interested in coming years to see if the bird continues to breed at Horicon and other sites with similar wetland habitats, and if these occurrences continue to increase as a result of wetland restoration efforts and perhaps the effects of climate change," Matteson said.