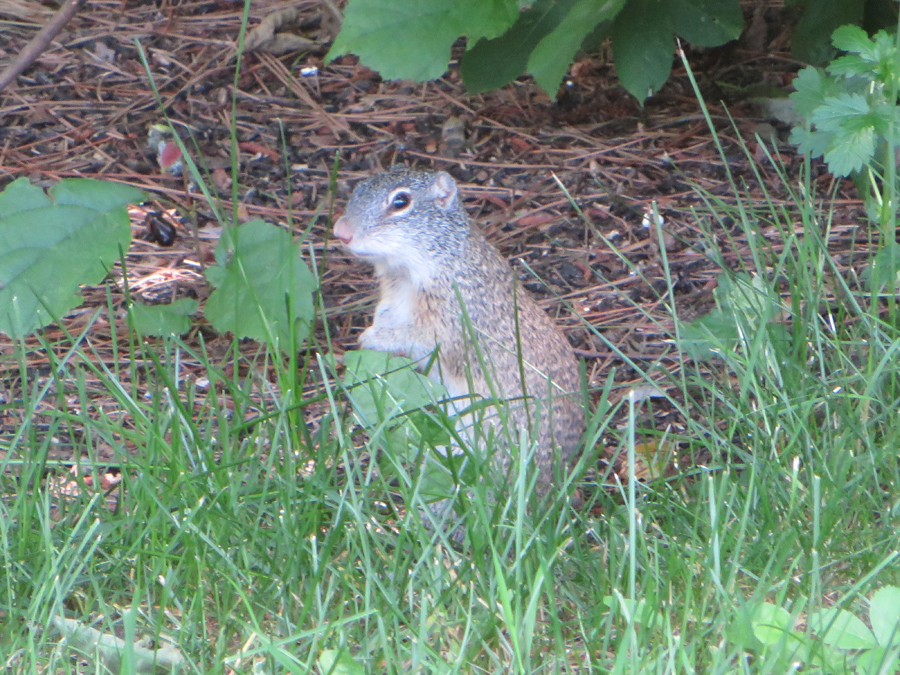 The Franklin's ground squirrel is one of Wisconsin's rarest mammals.Photo credit: Damian Vraniak

WASHBURN COUNTY, Wis. - A family of rare Franklin's ground squirrels is settling into new digs here before its long winter hibernation begins, thanks to team work by active and retired DNR conservation biologists, a Northland College professor and his students, and private property owners.

"Getting a report and making sure we could move them to a new location with a willing landowner is great news for this rare species," says Rich Staffen, the Department of Natural Resources conservation biologist who helped coordinate the rare squirrel relocation. "We're very excited because Franklin's ground squirrels are rare and so difficult to find because they are so secretive."

Vanishing habitat for a rare and secretive mammal

The Franklin's ground squirrel is similar in size and appearance to the much more common gray squirrel but has a shorter, flatter tail. Its back is rusty brown flecked with black, and adult males weigh just over one pound.

A tallgrass prairie species, Franklin's ground squirrel was historically found on the shrubby edges of prairies and woodlands extending from northwestern Wisconsin to southeastern Wisconsin. As tallgrass prairie and savanna have been lost to development, agriculture and succession to forest, Franklin's ground squirrel populations have dwindled, and they are now considered a "species of special concern," meaning its populations are low or declining, Staffen says.

"Historically, they were never common, but we're seeing a major range contraction," Staffen says. "We can't find them in southeastern Wisconsin anymore.

"We've had recent reports from Portage and Marathon counties, but it seems like the last stronghold is in northwestern Wisconsin, in Douglas, Burnett and Washburn counties." The animals typically avoid short grass or mowed lawns in favor of their preferred tallgrass areas that provide more cover from predators.

When a report came into DNR that a family of Franklin's ground squirrels was starting to pilfer vegetables from a private property owner's garden and dig under some building foundations, Staffen started looking for a new home for them.

Fortunately, he recalled now-retired DNR conservation biologist Adrian Wydeven once talking about a Washburn County property owner who was restoring tallgrass prairie, savanna and barrens with an eye toward providing habitat for rare species native to the area.

Staffen got in touch with Wydeven, who connected with the property owner, and a plan was laid to live trap the Franklin's ground squirrels and relocate them. That's where Northland College professor Erik Olson and his students came in.

They've been working this summer to conduct small mammal surveys in the Apostle Islands National Lakeshore, so the Franklin ground squirrel project was right up their alley.

Along with DNR State Natural Area crew members, they set up and monitored live traps on the Douglas County property. They caught three of the animals in a few days, transported the squirrels to their new home in Washburn County and released them after first weighing, measuring and marking the animals so biologists could track their movements and survival in coming months and years. Trail cameras were already set up on the new property and should aid this research going forward.

Keeping the family together

Staffen says live traps are still set up on the original property to see if they can catch what are believed to be three or four more family members. Franklin ground squirrels are what biologists call "semi-colonial," meaning they like to live in small family or loose breeding groups."

"We figured we'd try to keep them together with their family group so they have a better chance of survival," Staffen says.

Also crucial to the effort was relocating the Franklin ground squirrels so they had enough time to explore their new home and find suitable habitat for their winter hibernation. The animals are among Wisconsin's true hibernators; they are active between mid-April and September and then sleep in their underground burrows the rest of the year.

Hopefully, the animals will prove better at this than their namesake: Franklin's ground squirrel was named in honor of the British Arctic explorer Sir John Franklin, who perished with his crew in the 1840s while searching for the Northwest Passage, according to Prairie Public Broadcasting.

"We're hopeful this will be a win-win-win situation," Staffen says.

"The animals have been moved to a new location with the right kind of habitat and plenty of it, they are no longer eating the original property owners' garden vegetables or burrowing under their buildings, and some Northland College students are getting good experience in live trapping and processing these small mammals."