MADISON - Wisconsin conservation biologists are literally turning over rocks to look for signs of a wildlife disease found in half of the state's snake species and that has decimated local populations of rare snakes in other parts of the country including Illinois.

An eastern massasauga rattlesnake infected with snake fungal disease, which can hamper feeding and drinking and makes them more susceptible to predators.Photo credit: DNR

"We're turning over rocks and logs to look for snakes that might have this disease, because that's where many snakes tend to congregate," says Rori Paloski, a conservation biologist for Department of Natural Resources Natural Heritage Conservation Program. "We need more information to help us better understand the impacts of this disease and how to manage for it."

Paloski encourages reptile enthusiasts and others who see snakes in the wild to photograph and report any snakes with lumps along their face, neck and body or any unusual lesions or scabs.

People can send the photographs to DNRherptiles@wi.gov, along with the date of observation, precise location, species of snake and symptoms observed.

Snake Fungal Disease, or SFD for short, has the potential to decimate local snake populations because it can prevent snakes from effectively feeding and drinking and makes them more susceptible to predators by extending basking periods, Paloski says. 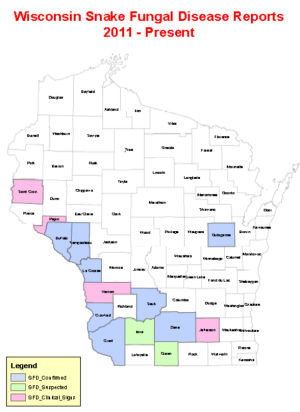 "We're trying to fill in any gaps on the map and come up with a list of species that are impacted by the disease," says Rich Staffen, a conservation biologist for DNR's Natural Heritage Conservation Program. "We're particularly looking for counties where it hasn't been reported."

Staffen, Paloski and other DNR staff have undertaken surveys in the state, worked with other researchers studying the disease, and received reports from biologists, rehabilitators, reptile enthusiasts, and the general public to better understand the disease's prevalence, distribution, and impacts in Wisconsin.

Initially the disease was thought to be new to the United States, but now the USGS - National Wildlife Health Center has found records that date back 30 or more years and suggest the disease was present at that time, including in Wisconsin, Staffen says.

"Given the potential historical presence of the disease, one of the things we are interested in is knowing what the trigger is and why the disease is becoming more prevalent."

A better understanding of the disease and its impacts can help DNR better manage rare snake populations that may be susceptible to the disease, Staffen says.