MADISON - Wisconsin's 2019 spring waterfowl population surveys indicate stable to increased numbers of the main species of breeding waterfowl as well as excellent wetland conditions, which should result in increased waterfowl production this year across most of the state.

This year, we saw slightly fewer numbers of total birds than the 2018 estimates. However, there is essentially no change in the mallard and wood duck population estimates, and Department of Natural Resources staff observed increases in our blue-winged teal and Canada geese. Wisconsin continues to be at or above the long-term average for all but blue-winged teal, according state wildlife biologists.

"Each duck species population estimate normally varies from year to year, so I urge hunters and other conservationists to interpret this information over several years and in the continental context," Taylor Finger, DNR migratory bird ecologist, said. "For example, the blue-winged teal breeding population in Wisconsin is lower than historic levels, but continental estimates the last few years have reached all-time highs, and two-thirds of Wisconsin regular duck season blue-winged teal harvest comes from out of state." 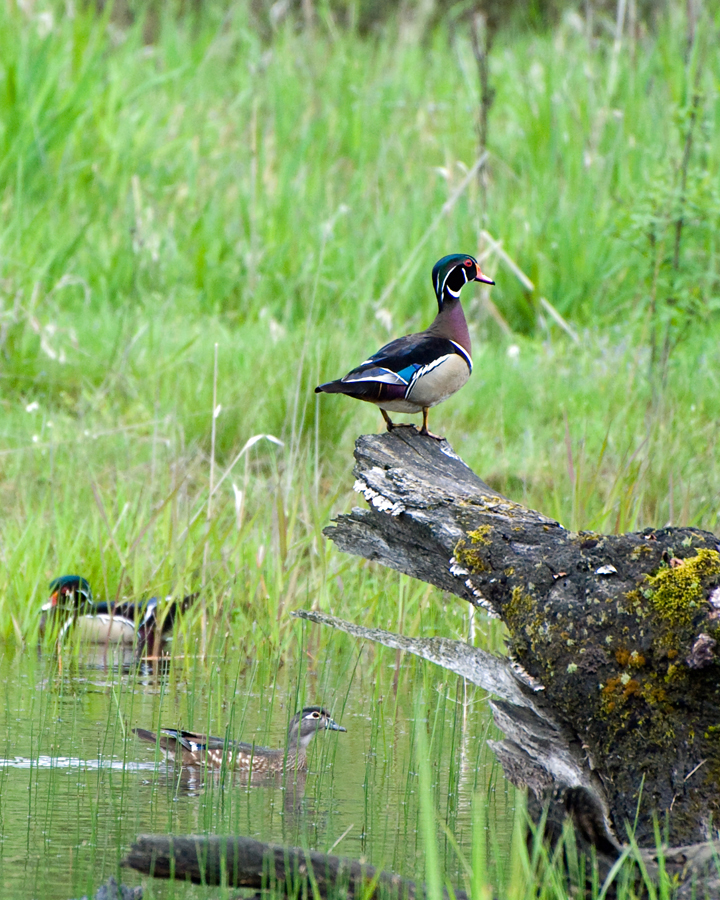 There was essentially no change in the wood duck population estimates from 2018.Photo credit: George Gentry, USFWS

The Wisconsin breeding duck population estimate of 413,662 represents essentially no change compared to 2018 and is in line with the long-term (46-year) average. Of the species-specific population estimates for the three top breeding ducks in Wisconsin, mallards and wood ducks showed no significant change, and blue-winged teal showed a 37% increase from 2018. It is important to recognize that this survey is designed to detect changes of 20% or more. Any changes less than 20% are not considered significant.

This survey, along with the U.S. Fish and Wildlife Service continental duck survey and the Ontario Canada goose survey, provides information regarding yearly waterfowl breeding conditions and is used to determine the fall season structure for Wisconsin. The full survey report can be found by searching the DNR website, dnr.wi.gov, for keywords "waterfowl management."

In 2019, Wisconsin saw below-average temperatures in March and April with lakes in northern part of the state still frozen at the end of April. This stalled migration in most of Wisconsin and breeding activity by mallards and Canada geese. There were average temperatures across most of the state in early and mid-May. Weather was an issue during the survey, with nearly a week lost due to poor flying conditions. These changing weather and migration factors make it difficult to schedule the breeding survey to effectively survey all species.

With above average precipitation in May following the survey, wetland conditions remained average to above average for brood rearing, and Wisconsin is expecting good duck production in 2019.

Wisconsin experienced a relatively wet and cold winter in 2018-19, which, combined with above-average precipitation in April and May, led to above-average wetland conditions throughout the state. Counts indicated wetter conditions in 2019 than in 2018 for all regions of the state with most areas well above the long-term averages. According to Finger, considerable rainfall in May following the survey has helped Wisconsin remain at average or above average wetland conditions for the year during the important brood-rearing period.

These breeding pair and habitat conditions are important to waterfowl hunters as roughly 70% of mallard harvest in Wisconsin is supported by locally hatched ducks. Although slightly lower this year, it is important to note that the average mallard population in the last few years has been fairly stable. This observation suggests that continuing our efforts aimed at controlling mallard harvest impacts and support for grassland nesting habitat conservation are important to the future of Wisconsin's local mallard population.

Wisconsin's Canada goose harvest is supported by Canada geese breeding in northern Ontario, as well as those breeding locally in Wisconsin. The Wisconsin breeding estimate for Canada geese is slightly up compared to 2018 at 171,407 birds. It's consistent with a stable-to-increasing population over the past 10-15 years. Continental breeding waterfowl population estimates from the U.S. Fish and Wildlife Service survey are expected to arrive in July.

In August, Wisconsin will join Alabama, Arkansas, Illinois, Indiana, Iowa, Kentucky, Louisiana, Michigan, Minnesota, Mississippi, Missouri, Ohio, Tennessee and the Canadian provinces of Manitoba, Ontario and Saskatchewan at the Mississippi Flyway Council to analyze survey data and provide recommendations to the U.S. Fish and Wildlife Service regarding waterfowl hunting regulations for the 2020 seasons. These recommendations will help determine the framework under which states and provinces set waterfowl hunting seasons.

Under new federal framework, Wisconsin conducted its annual waterfowl season hearings in spring 2019, and the Natural Resources Board approved department proposals for season structure at its April 9 meeting.

"Since this new federal framework is using data based on the prior year's breeding survey estimates, we can now propose and approve the waterfowl season several months before we have in the past," said Finger.

With earlier approval dates, 2019 migratory bird season regulations [PDF] are currently available online and at many license vendors throughout Wisconsin.

There are several significant changes to the 2019 waterfowl hunting season structure. The first of the 2019 migratory game bird seasons will open with the early goose, mourning dove and early teal seasons starting on Sept. 1. Regular waterfowl hunting seasons will include a 60-day duck season which will start with a statewide opener on Sept. 28 and 92-day regular goose season, which will have two splits to allow hunting during the Christmas and New Year's holidays.

Highlights from the 2019 season structure include:

For more information regarding migratory birds in Wisconsin, search the DNR website, dnr.wi.gov, for keyword "waterfowl."