MADISON - The Red Cliff Band of Lake Superior Chippewa, the Franciscan Sisters of Perpetual Adoration in La Crosse, and the Village of Fox Point's president and weed commissioner are among Wisconsinites recognized as "Invader Crusaders" for their significant contributions to prevent, control or eradicate invasive plants and animals. 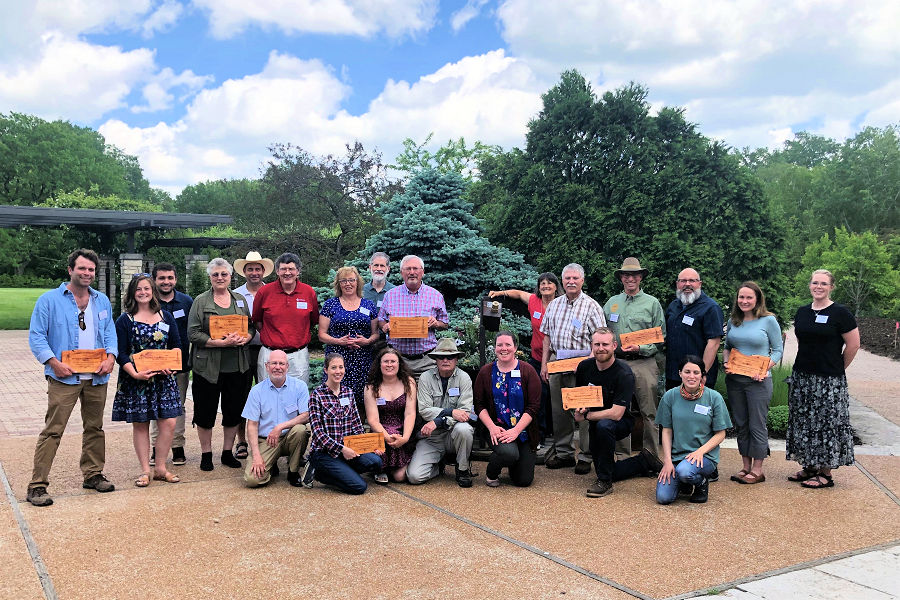 Winners of the 2019 Invader Crusader Awards pose for pictures after a June 5 ceremony in Madison.Photo credit: Jane Simkins

The action month aims to engage people in taking actions to prevent spreading invasive species in their work and recreational activities, and to recognize outstanding work done to address invasive species by volunteers and natural resource professionals.

During the award ceremony, DNR Deputy Secretary Elizabeth Kluesner thanked the individual and organizational recipients for their hard work and dedication, which benefit all who live, work and play in Wisconsin. "Today, we celebrate the results of your work - lakes and lands that are given a chance to recover after many hours of hard work and dedication to control and manage invasive species," she says.

"You are transforming local hands-on management into teaching and organizing opportunities to broaden the impact of your efforts."

Invader Crusader awards are given in several categories, recognizing individuals and groups, both professional and volunteer, and are selected by the Wisconsin Invasive Species Council. Nominations come from citizens and organizations. The honorees and a brief description of why they received the award follows; longer descriptions are available on the Wisconsin Invasive Species Council website [exit DNR].

The Aldo Leopold Foundation is recognized for its active role in establishing and managing the Leopold-Pine Island Important Bird Area near Baraboo, including significant work to control invasive species, and for helping develop the next generation of conservation leaders. The 16,000-acre area is identified as one of Wisconsin's best bird habitats and consists of lands owned by several public and private entities.

The Red Cliff Band of Lake Superior Chippewa is recognized for a highly ambitious invasive species project to eradicate and replace nonnative phragmites from three wastewater treatment plants in northern Wisconsin. Project leaders Chad Abel and Gabrielle VanBergen secured funding from the Great Lakes Restoration Initiative. Their work made it possible to help protect thousands of acres of shoreline in northern Wisconsin, improving the health of Lake Superior, its watersheds and the lives and livelihoods of people who live there.

The Wisconsin Department of Agriculture, Trade and Consumer Protection's Nursery Inspector Team monitors over 1,000 plant growers and dealers with the goal of detecting and halting the sale of regulated invasive species. The inspectors' work helps prevent the introduction of invasive species to Wisconsin's natural areas and the subsequent efforts that would be needed to manage them.

The Woodland Dunes Barberryans have contributed thousands of hours to help address invasive species at the Woodland Dunes Nature Center and Preserve in Two Rivers, including helping plant 3,000 trees annually over four years and native plants in areas hit by the emerald ash borer, an invasive insect that kills ash trees. The Barberryans also engage hundreds of citizens from school-age children to college interns and adult peers in habitat restoration and land management projects.

The Franciscan Sisters of Perpetual Adoration created a management plan committed to vigorous control of invasive species on their 200-acre property. After eight years of work, nearly all mature invasives have been removed and they have treated 20 acres of invasive species on adjoining private properties to reduce the amount of invasive seed that washes into a trout stream watershed.

Rod Sharka has eradicated invasive honeysuckle at Tenderfoot Reserve's 900+ acres as their volunteer land manager and has built partnerships with neighboring landowners and trained them to survey, map and manage honeysuckle infestations.

Douglas H. Frazer, president and weed commissioner for the Village of Fox Point, has helped Fox Point become a municipal leader in identifying and eradicating invasive species - through community engagement, education, availability of removal equipment and best of all - humor. He also spearheaded the enactment of a new Village ordinance banning garlic mustard and buckthorn.

Michael Vahldieck has been a dedicated and hardworking volunteer for Dane County Parks, working diligently to detect, map and remove invasive species. His mapping and control work at Walking Iron County Park helped save a high-quality remnant sand prairie from brush encroachment.

Donna VanBuecken has worked with invasive species for over 40 years, beginning as an at-large member of the Wild Ones and then as a founding member and longtime board member of the Fox Valley chapter. She was also one of the founding members of the Invasive Plants Association of Wisconsin, and does invasive species outreach to schoolchildren as well as hunting and fishing groups.

Maureen Ferry, anaquatic invasive species monitoring specialist with the DNR, was recognized for developing new monitoring protocols for streams and wetlands, and decontamination procedures for all DNR staff to follow to prevent accidentally spreading invasive species during field work. Her efforts have provided Wisconsin a better picture of where invasive species are located, allowing for timely, appropriate management decisions to protect areas not yet affected by invasive species.

Emily Heald, water program coordinator at North Lakeland Discovery Center in Manitowish Waters, has managed lake and river protection programs in Vilas County townships, engaging people of all ages with creative approaches, like the "Float Your Boat" trivia contest in which contestants answered trivia questions about aquatic invasive species and lake history from their pontoon boats.