[EDITOR'S ADVISORY: This news release has been updated to reflect that water hyacinth was found in one spot on the lake in fall 2018 and removed.    We regret the error.]

MADISON - Invasive Species Action Month gets underway this June with some good news about giant hogweed and other prohibited invasive species that threaten Wisconsin's ecosystems, economy and recreation. 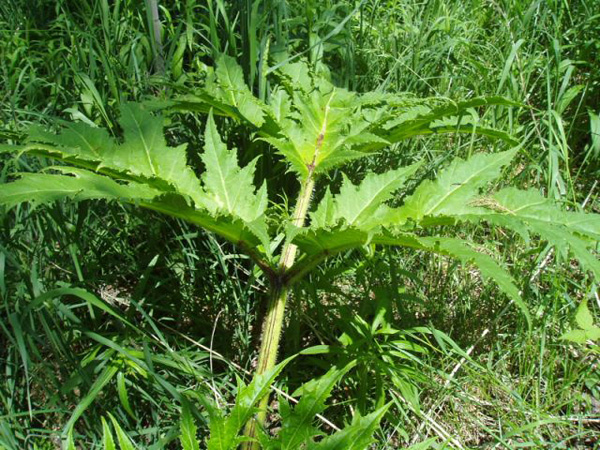 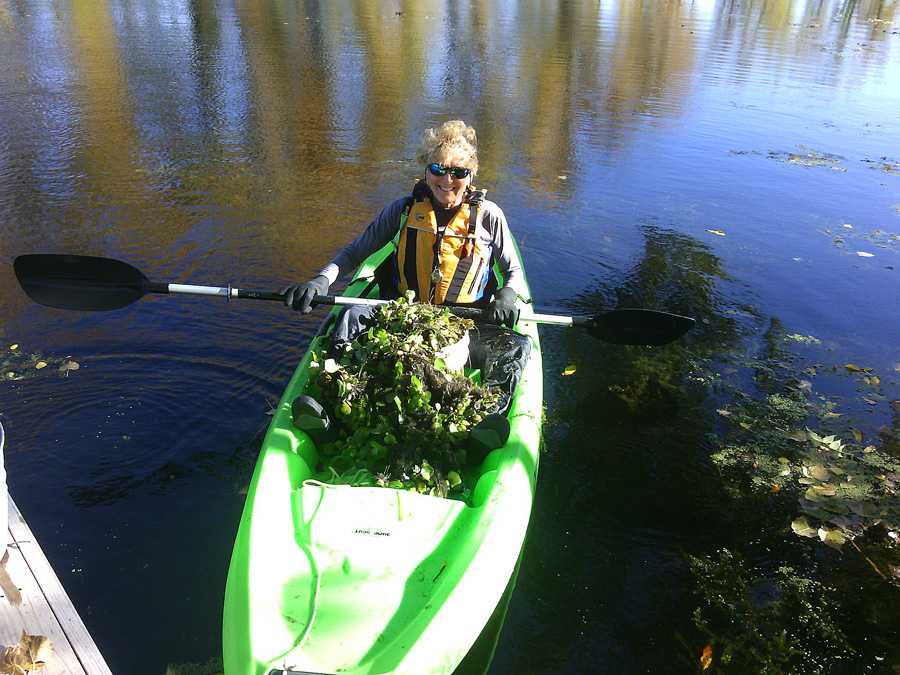 Invasive water hyacinth has been tamed in Lake Winnecone, thanks to volunteers and local partners like Valerie Stabenow, shown here with the invasive plant.Photo credit: DNR

"We are very pleased to be able to share the good news about these control successes for invasive species on Wisconsin's prohibited species list," says Tara Bergeson, who coordinates the Department of Natural Resources invasive species team.

"Partnerships made these possible, and we are very grateful for the work done at the local level. All of these efforts are critical to prevent invasive species from taking a toll on our ecosystems, our economy and our outdoors fun."

Invasive species are non-native plants, animals, or pathogens that take over a new location and alter the ecosystem, affects its function, economic value and/or human health.

Wisconsin's invasive species rule, chapter NR 40 of the Wisconsin Administrative Code, creates a classification system that regulates the introduction, sale, transport and possession of listed invasive species. Prohibited species are those that are not known to be in the state or only in small selected locations so containment is feasible. With certain exceptions, it is illegal to transport, possess, transfer and introduce prohibited species to Wisconsin.

The report highlights partnerships ranging from a drain campaign and landing blitz in which DNR, University of Wisconsin-Extension and lake association volunteers distribute reusable ice packs to anglers at boat landings to use to ice the fish they catch and take away from a waterbody, to the 14 Cooperative Invasive Species Management areas, coalitions of private, public and nonprofit organizations, volunteers and landowners working together to identify and address local needs, and partnerships.

Other efforts highlighted in the report include education and outreach efforts in 2018 aimed at enlisting anglers, boaters, hunters, gardeners, landowners and others in making sure they do not accidentally spread invasive species while enjoying the great outdoors.

"We don't have the resources to get rid of all invasive species, so prevention is very important," Bergeson says. "We're continuing outreach efforts with partners to encourage Wisconsin residents and visitors to protect the places you live and play.

"During Invasive Species Action Month and throughout the year, please drain boats, bait buckets and live wells before leaving waterbodies and remove all plants from your trailer and boat; brush off your clothes and boots and your dog's coat to remove brambles and seeds before leaving an area, and making sure you do not buy or add invasive plants to your yard or water garden."