ASHLAND, Wis. -- When anglers think of fishing the big water of Lake Superior, walleye is rarely the first species that comes to their minds. However, a recent Wisconsin Department of Natural Resources walleye assessment in Chequamegon Bay showed bountiful numbers of walleye along the Ashland shoreline this spring, all ready to fill the livewells of lucky anglers.

Four fyke nets were deployed along the Ashland shoreline on April 27 to target spawning walleye as part of the department's monitoring efforts. 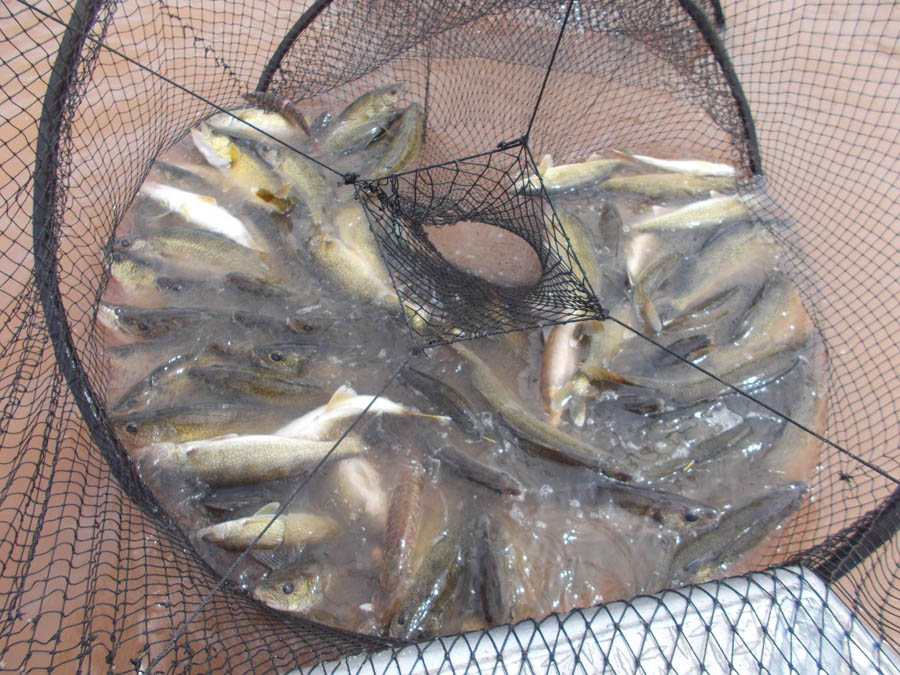 "The first day of lifting showed the abundance of walleye near Ashland and demonstrates that our management is producing an abundant walleye population," according to Dray Carl, DNR fisheries biologist.

Out of the four nets on that first day, 905 walleye were captured, processed, and released back into the water. Carl indicated that during the 8-day assessment 3,560 walleye were sampled, and the nets contained a large number of female walleye between 19 and 22 inches. The largest walleye captured was a 31.9-inch female.

Each walleye was measured and given a unique numbered yellow tag. In addition, a dorsal spine was taken from a subsample of fish to obtain age estimates.

"The yellow floy tag placed just below the dorsal fin will allow us to gather information on walleye growth and mortality rates, which will increase our information on this important fishery in the Bay," Carl said.

"Anglers can further help improve our management by taking the time to contact the Bayfield Fisheries Office at 715-779-5051 with information including the tag color and letter-number combination, species, date, relative location, and whether the fish was harvested," Carl said.

This information will be used to aid management of Lake Superior fisheries, and in return, anglers will receive all information that the department has collected about that tagged fish. Also, anglers are asked to leave the tag in the fish that are released.

The regulations for walleye in Chequamegon Bay include a daily bag limit of 5 with a minimum length limit of 15 inches with only one over 20 inches.
Last Revised: Wednesday, May 29, 2019