SUPERIOR, Wis. - The first endangered piping plovers are returning to Wisconsin this month as partners work to protect the birds' habitat in hopes of boosting nesting success.

Typically, piping plovers need large isolated beach and dune habitats. Flooding in 2018 washed away nests and along with suspected predation contributed to a low total of chicks fledging from Wisconsin's longtime nesting site on Chequamegon Point in the Apostle Islands. Predation may have also taken a toll on a more recent plover nesting site in lower Green Bay. 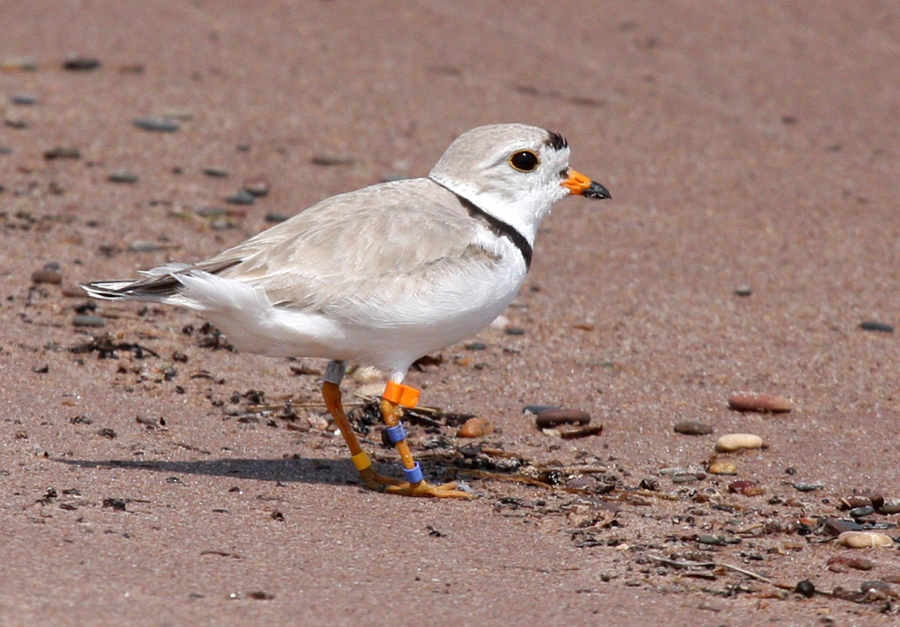 "Last year was a tough year for piping plovers in Wisconsin, but Wisconsin plays an important role in the overall recovery effort, and partners are energized for the upcoming season and are working together to protect important habitat and monitor nesting pairs," said Reena Bowman, a U.S. Fish and Wildlife Service Biologist.

As a result of concerted protection efforts by the National Park Service, Bad River Band of the Lake Superior Chippewa, DNR, U.S. Fish & Wildlife Service and The Nature Conservancy, nearly 100 piping plover chicks have been produced at Chequamegon Point. This year, partners at the Chequamegon Point site will be stepping up efforts to protect piping plover nests from unleashed dogs, which pose a threat to piping plover nesting success and chick survival. Chequamegon Point is part of Apostle Islands National Lakeshore, where dogs are required to be on a 6-foot or shorter leash at all times.

In 2016, piping plovers nested in lower Green Bay for the first time in 75 years on the Cat Island Chain restoration project. The project is ongoing and is being completed in partnership with local, state, and federal partners. Twelve piping plover chicks have fledged from the site to date. For the upcoming seasons, partners will work together to maintain suitable piping plover habitat, protect nests, and monitor for predators.

Endangered Piping Plover Gets a Boost in Wisconsin

Other efforts in 2019 to benefit piping plover include adding potential nesting habitat to another site near Superior. The site, the Wisconsin Point Bird Sanctuary, is owned by DNR and the project will improve habitat for the birds along 1,700 feet of the St. Louis River shoreline and eight acres of foraging and nesting habitat. The project is funded by the EPA and designed and constructed by the U.S. Army Corps of Engineers in conjunction with DNR.

Piping plovers once nested along the shores of all the Great Lakes but habitat loss, recreational pressure, and predation likely contributed to serious declines. By 1948, only one pair of plovers was known to nest in Wisconsin and the piping plover was added to the state endangered species list in 1979. Across the Great Lakes region, the loss of habitat caused numbers to drop below 20 nesting pairs region-wide before the small shorebird was listed as federally endangered in 1985.

The public can help piping plover recovery efforts by reporting their sightings of piping plovers with metal and color bands on their legs. The color codes vary according to the location where they were banded. By getting reports of the birds' whereabouts, the recovery partners can better understand the birds' migratory routes, the habitats they use, and their survivorship. For more information on piping plovers and how to report your sightings of banded piping plovers, search the DNR website, dnr.wi.gov, for "piping plover."