MADISON - With 2019 winter surveys showing that the bat disease white-nose syndrome has reduced bat populations to zero at some hibernation sites and decreased others by 72 to 97%, state bat biologists are calling on the public to report the barns, buildings, bat houses and other roosts where surviving bats are showing up.

White-nose syndrome, WNS for short, does not affect people nor other animal species but causes hibernating bats to frequently wake, depleting their energy and causing them to die from starvation, dehydration or exposure to the elements. Since the discovery of white-nose syndrome in 2006 in New York, millions of bats have died and the disease has spread to 33 states and seven Canadian provinces.

"Surviving bats are starting to emerge from their winter hibernation sites and in order to protect these remaining bats, we need people to let us know the location of bat roosts," says J. Paul White, who leads the Department of Natural Resources bat team.

Bats at roost sites could be survivors of white-nose syndrome or young born this year that have not yet been exposed to the fungus causing the disease. Knowing these locations will allow bats to be vaccinated if current experimental trials underway in Wisconsin prove effective.

"If we find something that will help bats persist in light of WNS, like a vaccine, we can give it to bats at known roosts in coming years and help keep surviving bats and young bats from succumbing to white-nose syndrome," White says.

Such citizen reports also will supplement bat biologists' efforts this summer to locate bridge abutments where bats are roosting. Such information can help transportation officials plan bridge repairs to avoid when bats are having their young and nursing them, helping protect Wisconsin's remaining cave bats.

Roosts can be reported to DNRbats@wisconsin.gov.

DNR bat biologists and partners have conducted winter surveys for Wisconsin's four species of hibernating bats for the past decade, banded some to track their movements and fates in future years, and collaborated on research at survey sites into vaccines and treatments. The surveys have enabled DNR to estimate bat populations at different sites before white-nose syndrome arrived, to track the arrival and spread of the disease, and now, to find survivors and better understand those conditions that allow for higher survival rates and can inform future recovery efforts. 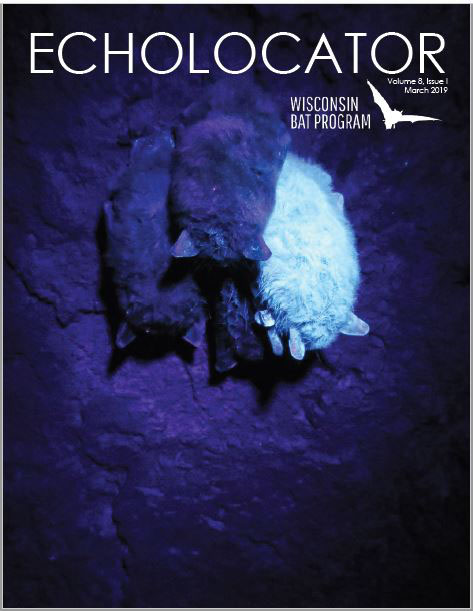 Get Wisconsin news and research in Echolocator, DNR's bat newsletter.

At the Grant County mine where the disease was first detected six years ago, biologists found eight individual bats of two species left from a population that, at its highest count was over 1,200 individuals of four bat species.

At sites in their fifth year of infection, bat populations are down 97 percent across the board, White says.

"As with the eastern states, who have been dealing with the disease for over 10 years now, there are major declines in the early years of infection and then the sites either drop to zero or have low-lying populations," he says.

Relatively good news is that bat populations at Wisconsin's two largest hibernation sites were down significantly but that large numbers of bats were persisting, White says.

The prospects for recovery at those and other sites, and the impacts on Wisconsin's ecosystems and economy, are unknown at this time, he says.

Bats can eat up to 1,000 insects an hour and a recent national study put bats' value to Wisconsin's agricultural industry between $658 million and $1.5 billion a year. As well, recent University of Wisconsin-Madison research found that Wisconsin bats ate nine of the mosquito species known to carry West Nile Virus.

White is also putting out a call for more volunteers to help DNR with "acoustic" surveys and for the Great Wisconsin Bat Count, held twice each summer.

Other volunteers are needed for the Great Wisconsin Bat Count, which this year will be held May 31-June 2 and July 19-21. The first statewide count is conducted before young bats, called "pups," are able to fly and the second count occurs after pups are flying on their own. Volunteers identify bat roosts and sit outside the roost entrance in the evening to count the bats as they emerge just after sunset and report those results to DNR.

Knowing where larger concentrations of bats are surviving, which species they are and the characteristics of their habitat, are all important to understanding bats and helping their populations recover, he says.

To learn more about these volunteering opportunities, visit DNR's Wisconsin Bat Program web site and use the "volunteer" drop down menu.