WASHBURN, Wis. - A firehouse on Madeline Island was ablaze.

In the end, the Town of LaPointe, which is the island, lost all its firefighting and emergency rescue equipment. No fire trucks. No ambulance. No SCBAs, the "self-contained breathing apparatus" tanks firefighters use to enter burning structures.

Among the volunteers who rushed across the ice to help was Mark Guenther, a forestry technician with the Department of Natural Resources and a volunteer on the Washburn Fire Department. He sized up the situation. With the ice melting, it would be weeks or months before replacement fire engines could be ferried across. The island community would be defenseless. He made a phone call.

Before the sun set the following day, the DNR had moved two of its Type 4 wildland firefighting engines across the ice - a tricky operation, given that they weigh 9 tons apiece - where they will offer protection for the residents of the island while their own fire department rebuilds. 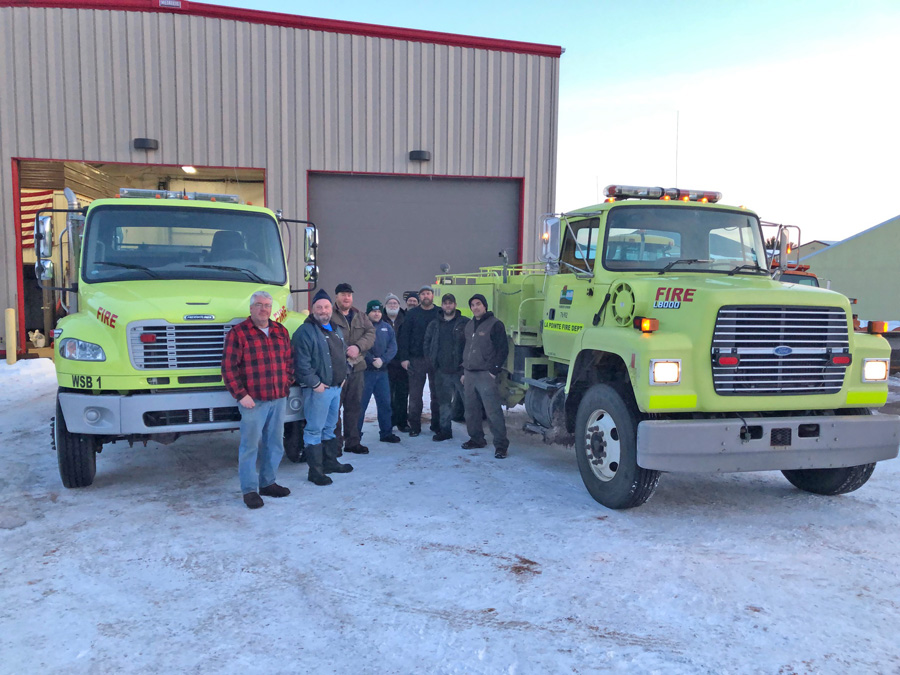 Handing off the trucks: Mark Guenter, DNR forestry technician (left) hands over the wildland firefighting engines to members of the La Pointe Fire Department in front of the shop that will house the engines on Madeline Island.Photo credit: DNR

"Local rural fire departments work closely with us in forest fire suppression," said Fred Souba, DNR chief state forester. "We felt we needed to support them in their time of need."

This involved a lot of people working hard and fast. Guenther's first call was to Mike Lehman, a mechanical engineer and the superintendent of the DNR's forestry equipment research and development center in Tomahawk. This is where DNR designers and mechanics take large truck frames and built specialized DNR fire engines from the chassis up. Guenther asked Lehman if there were any surplus engines available.

"We had just happened to deliver several new Type 4x engines to DNR field stations," Lehman said. "We had a few old surplus units here waiting for auction. I checked with my staff to ensure our units could be made fire ready and told Mark I think we can do this."

DNR Type 4 wildland firefighting engines were developed to be relatively light and mobile, while carrying and pumping 850 gallons of water, firefighting foam, two firefighters, hand tools and several hundred feet of fire hose. Type 4 engines also pull a small bulldozer on a trailer behind them when deployed for wildland fire fighting.

Lehman sent the plan to division management for approval. The surplus units were covered with snow and ice. It was 15 degrees below zero. DNR employees dug them out, got them started and moved them inside the shop to thaw. While staff rushed to get the engines fire ready, DNR attorney Kassie Lang worked with Lehman to quickly draft a cooperative agreement so the fire trucks could be legally loaned to the town's volunteer fire department at no cost.

"It was an excellent team effort," Lehman said.

Meanwhile, Guenther raised a concern. He wasn't comfortable with the pumping capacity of the older units. Fine for a grass fire, but maybe inadequate for a firefighter entering a burning structure with a charged hose. So, the DNR loaned its new Washburn engine along with one of the older units. The shop at Tomahawk has a vinyl-cutting machine, and DNR staff made new name plates for the trucks.

"We re-badged them, so they even have 'La Pointe Fire Department' on the doors," said Amanda Firkus, a DNR crew member at Tomahawk.

Then came the tricky part. The ice road to the island is maintained by the Nelson Construction Company under a contract with the town.

On Thursday, the day after the fire, the town closed the ice road for the duration of the operation. Four members of the Nelson crew were on hand: Arnie Nelson; his son, Nathan; and brothers Brian and Troy Nelson, who are cousins of Nathan and experienced firefighters.

The ice was 22-inches thick. Fine for people in their cars and pickups, but a Type 4 fire engine weighs about 18,000 pounds when empty of water. The trucks were driven across one at a time, slowly, with another member of the Nelson crew following in a light vehicle to watch for any movement of the ice, or for cracks or water coming through to the surface. The ice held, but not without loud groans of protest.

"It made a heck of a racket," Nathan said. "That was pushing what that ice can handle."

Nathan is a member of the La Pointe Volunteer Fire Department. He said other departments in the area have loaned the island an ambulance and a brush fire truck. Wisconsin Indianhead Technical College, which has a Fire and Technical Rescue program at Ashland, delivered a trailer full of firefighting equipment including the SCBA air packs, as well as the cascade air fill system to refill them, among other items. They now have complete gear for 18 of their firefighters. And, until they get their own trucks, they have two DNR fire engines on loan to fight structure fires.

"We're very isolated up here," Nathan said. "It can take 45 minutes for help to arrive from the mainland. This will help for sure. It's been overwhelming the support we've been getting."