Call for Volunteers to Attend Kickoff Workshop in April

ASHLAND, Wis. - The snow may be flying, but great horned owls are already sitting on eggs, defying the idea of creature comfort. Their breeding activity is spurring hundreds of volunteers to begin the fifth and final season of collecting data for a comprehensive, once-in-a-generation statewide breeding bird survey. 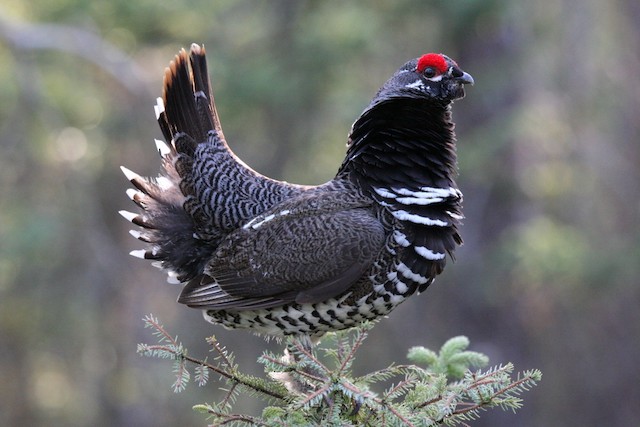 The spruce grouse, a threatened species in Wisconsin, is one of the hundreds of bird species that volunteer surveyors will be looking and listening for this field season. Photo credit: Nick Anich

"The kickoff is a great time for motivated volunteers to meet with county coordinators so we can all strategize on how to efficiently finish the remaining blocks," says Nick Anich, lead coordinator of the Wisconsin Breeding Bird Atlas survey and conservation biologist with the Department of Natural Resources. "The biggest remaining gaps are in northern and western Wisconsin but there are still opportunities in every area of the state to help."

For volunteers of Wisconsin Breeding Bird Atlas II, timing is everything. These volunteers, also known as "atlasers," are attempting to document where, when, and how many bird species breed across the entire state. Knowing when to look for each breeding species is key to success.

Great horned owls are the earliest of Wisconsin's breeding birds; by the time the breeding season winds down in August, more than 200 bird species will mate and raise young.

Strategy regarding when and where to survey, or "atlas," will underscore the weekend, says Ryan Brady, science coordinator of the atlas survey and DNR conservation biologist.

The Wisconsin Breeding Bird Atlas II splits Wisconsin into more than 6,800 blocks, and 1 in 6 of these blocks, 1,283 "priority blocks," must be fully surveyed by late summer of this year. After four years of data collection, about 15 percent of Atlas priority blocks have seen little to no survey effort, while an additional 25 percent still need some work to be marked complete.

"It's time for Wisconsin's birdwatchers to step up in a big way," says Brady. "Thousands of volunteers have contributed so far--we'll need them and others more than ever in this fifth and final year of surveys."

Only a statewide effort will reveal trends of which species are increasing or decreasing, information that will help inform the next generation of bird conservation.

At the kickoff event, in addition to a job fair-style session with county coordinators, a full agenda including field trip opportunities will be offered throughout the weekend, beginning with an optional "Atlasing 101" session on Friday afternoon, and running through noon on Sunday. Topics range from an overview of project results to date, how-to tips for uncovering secretive species, and a Q & A session.

The meeting's keynote speaker will be Ian Davies, eBird project coordinator with Cornell Lab of Ornithology. Data collection for the Wisconsin Breeding Bird Atlas is administered entirely through eBird, and Wisconsin was the first atlas project to use eBird in this way. Davies says the process that Wisconsin began has continued to snowball, and there are now three active eBird Bird atlases (Wisconsin, Virginia, and Maine), with upcoming projects in New Zealand and New York in the next year.

Davies says Wisconsin volunteers have set a high bar for all future breeding bird atlases, and encourages more people to participate in 2019. "This is your last year to atlas in Wisconsin! Come out to meet new people and learn about one of the most fun ways to go birding," he says.