RHINELANDER, Wis. - Wisconsin conservation biologists hope a network of trail cameras can play a role in helping to restore populations of the American marten, an elusive member of the weasel family and the only state-endangered mammal in Wisconsin.

Starting in December 2018, state conservation biologists began deploying trail cameras in the Chequamegon-Nicolet National Forest among 120 different sites to capture photos of the martens, which inhabit older forests of northern Wisconsin. A special platform mounted on a tree in front of a camera encourages martens to reach for a bait, clearly exposing for the camera the unique pattern of yellowish-orange fur on the animal's throat and chest. 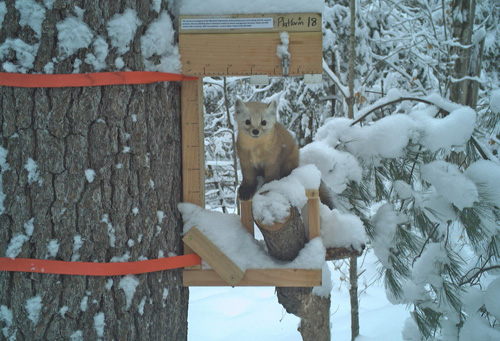 The recent snowfall is especially good news for American martens, which tunnel under the snow in search of prey. Inconsistent snowpack in recent years, however, is one reason conservation biologists are turning to trail cams to help research and monitor marten populations.Photo credit: DNR

Biologists hope to use the resulting photos and data to track individual martens so they can generate more reliable estimates of population size and annual survival. As well, the biologists hope the trail cameras can reveal more about the American marten's habits so the Wisconsin Department of Natural Resources and other conservation partners can refine strategies for recovering the species.

"We're optimistic about the population status of marten in Wisconsin," says Skyler Vold, the conservation biologist leading the project for the DNR Natural Heritage Conservation Program. "Establishing long-term research and monitoring with trail cameras may help us discover more details to aid marten recovery in the state."

American martens, small mammals weighing 1 to 3 pounds and measuring 1.2 to 2 feet in length, with about one third of that length its long bushy tail, were historically abundant and widely-distributed in northern Wisconsin before European settlement. Unregulated trapping and widespread habitat destruction led to their disappearance from the state around 1925, and the mammal was placed on the state endangered species list in 1972, according to Carly Lapin, a DNR conservation biologist who also works to recover this species in Wisconsin.

There have been multiple attempts to reintroduce American martens in Wisconsin since the 1950s with varying degrees of success, and many partners have been working together on restoration and habitat protection efforts for the species, Lapin says. The U.S. Forest Service, the Great Lakes Indian Fish and Wildlife Commission, Native American tribes, universities, local governments, the forestry community, conservation groups, private landowners and other interested people are among the partners.

Using trail camera technology will allow department staff to identify individual martens across multiple years, enabling biologists to monitor populations and estimate abundance and survival through time. Traditionally, individual animals had to be captured and marked to achieve these population estimates.

"Using cameras to collect these types of data is cheaper, requires less time in the field, and is less invasive to the study animals," Vold says.

Importantly too, the trail cameras will be a more reliable survey method than snow track surveys, which require ideal snow conditions, which have not been consistent in recent years in northern Wisconsin. Additionally, lower average snow depths in northern Wisconsin may affect martens' efficiency in hunting prey in winter and their ability to outcompete fishers, another reintroduced member of the weasel family whose recovery has been more successful, Vold says.

"We hope this new long-term effort can continue to help identify the most influential factors constraining marten populations in Wisconsin and use this research to inform management actions for their continued recovery into the future," he says.

Natural Heritage Conservation work to restore endangered wildlife, plants and habitats and keep native species from disappearing are funded in part by the Endangered Resources Fund. People can donate to the fund on their Wisconsin income tax form. All donations are matched by the state, doubling donors' impact.