HUDSON, Wis. - Reconstruction of the Little Falls Dam in Willow River State Park, which began in the summer of 2018, is on schedule to be completed later this year.

The initial work that was completed this past summer and fall included building a diversion channel for the Willow River to flow through during construction. Once the channel was completed, an access road was built across the river to the site of the old dam. The remaining components of the old dam were removed so the site could be prepared for the new dam foundations. 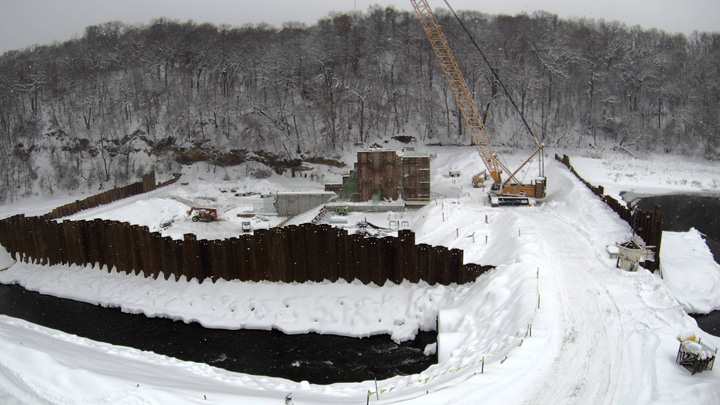 Construction of the Little Falls dam at Willow River State Park is on schedule and should be completed by this fall.Photo credit: Little Falls Dam webcam

Parts of the dam that were recently completed include the grout mat and grout curtain, as well as concrete footings for other components. The intake tower, which will act as the primary gate for the flowage, is currently being built. This tower will enable downstream water temperatures to be regulated as necessary.

The general contractor for the project is Miron Construction Company, Inc. of Neenah Wis.

Wisconsin Department of Natural Resources fisheries staff will soon begin working on providing additional fish habitat in Little Falls Lake. Crews will take advantage of the frozen ground to install boulder clusters in selected locations on the lakebed. These boulder clusters will attract smallmouth and largemouth bass once the lake is refilled. More habitat work is planned for later in the year. In addition to bass, the department is also planning to stock bluegills, crappie and perch once the dam project is complete and conditions allow for their introduction.

The Little Falls Dam is being replaced in response to inspections identifying significant deficiencies to the structural integrity of the dam. The department initially breeched the dam in 2015 to draw down the flowage and alleviate safety concerns. The design process began later in 2016 after the department determined that dam replacement was the best option moving forward.

For more information or to view the construction progress, visit dnr.wi.gov and search for "Willow River State Park" then select "Little Falls Dam" in the right-hand column.