MADISON - Some of Wisconsin's most beloved birds - purple martins, chimney swifts, tree and barn swallows, Eastern whip-poor-wills, and common nighthawks - are in trouble and residents can learn more about why and how to help these birds around their home during an early September conference in Waukesha.

The Sept. 6-8 event is the combined annual meeting of the Wisconsin Bird Conservation Initiative, a coalition of 180 groups committed to conserving native birds, and a summit of the 109 Bird City Wisconsin communities. Registration for the event (exit DNR), which includes evening field trips to look for one of these declining species, the chimney swift, closes Aug. 21. 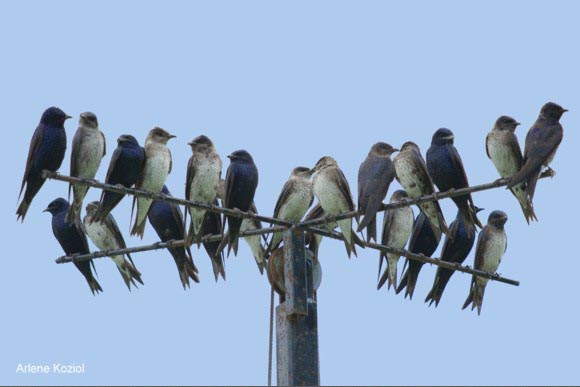 Registration closes Aug. 21 for a combined conference of the Wisconsin Bird Conservation Initiative and Bird City Wisconsin. Declining populations of purple martins and other aerial insectivores are one of the main topics participants will tackle.Photo credit: Arlene Koziol

"Conservation groups have taken notice and are beginning to address declines in these beneficial insect-eating birds, but citizens can help too," says Ryan Brady, a conservation biologist for the Department of Natural Resources and bird monitoring coordinator for the Wisconsin Bird Conservation Initiative.

"We invite you to attend the conference to learn more about these birds, why we should be concerned, and the work being done to address the concerns. Most importantly, you can learn more about how you can help at home. The time to act is NOW!"

These birds, as well as other swallows, some flycatchers, and even bats, are known as "aerial insectivores," species that feed on their insect prey in flight. Causes of these declines are likely complex and involve multiple factors depending on the species, such as loss of foraging habitat, decreased availability of nesting sites, increased predation, etc., but the one feature these birds all share is their reliance on flying insects as a primary food source, Brady says.

"Although solid long-term data is lacking, there is widespread belief that numbers of flying insects have declined dramatically in recent decades," he says.

Adds Karen Etter Hale, WBCI chair and Wisconsin Audubon Council's Director of Community Relations, "Some of us remember, from years ago, how we had to scrape "bugs" off our windshields. That hardly ever happens anymore."

Hale says that the bird conservation coalition and the Bird City Wisconsin organization thought combining their meetings would offer the opportunity to quickly expand efforts on behalf of these aerial insectivores.

"Come and learn about these fascinating birds, how to visualize airspace as habitat, and what you can do to help. We can guarantee you'll head home inspired to take action in your own community."