Gains made in treatment, vaccine research will help surviving bats and other states

MADISON - Winter cave and mine surveys in 2018 show that white-nose syndrome continues to ravage Wisconsin's cave bats and the steep loss of these beneficial insect-eaters is likely to be seen this summer in nighttime skies, state endangered resources officials say.

"We're still seeing new sites with infection and bigger declines in the numbers of bats we're surveying in winter," says J. Paul White, Wisconsin Bat Program lead with the Wisconsin Department of Natural Resources. Pepin County was added to the list of those with hibernacula infected with the disease. 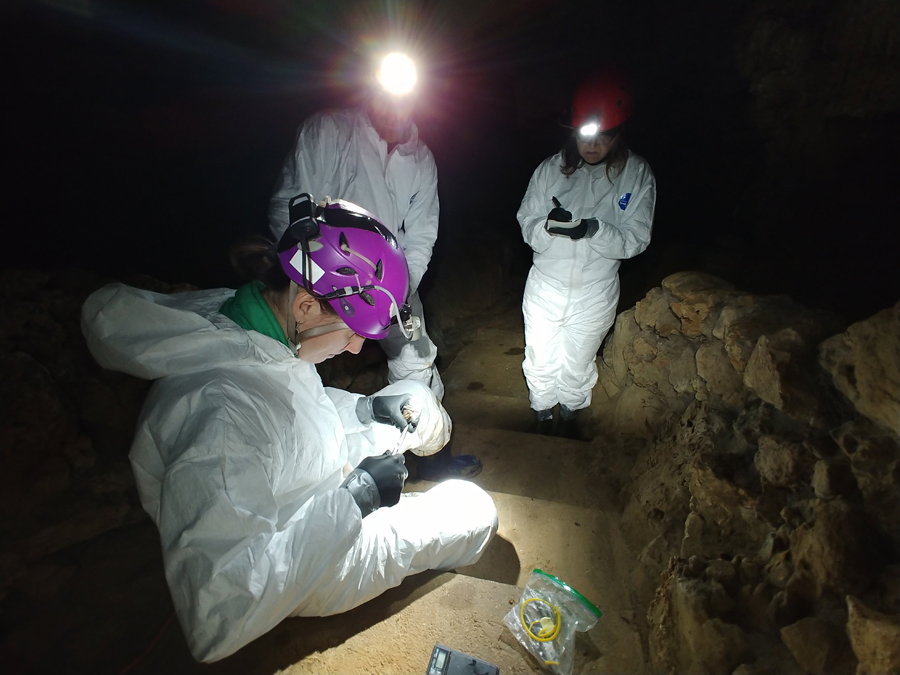 White and other Wisconsin conservation biologists did find some silver linings in their 2018 winter surveys, and federal and university research DNR is assisting with are showing promise and progress in developing WNS vaccines and treatments, White says.

"These efforts can potentially help our remaining bats and also bats in other states where the disease has not yet been detected," he says.

All 60 sites visited in winter 2018 were infected and at those sites, DNR conservation biologists found a 99 percent decrease from historic averages at the first documented infection site; a 92 percent drop at sites in their fourth year of infection, and an 85 percent drop at sites in their third year of infection. Twenty-five of the 28 counties with known bat hibernacula now have WNS or the fungus that causes it.

Severe decreases in populations of hibernating bats are also showing up in the summer nighttime surveys volunteers conduct. For example, the average decline in summer roost populations across the state in 2017 was 80 percent. More information on summer survey results area available in the Wisconsin Bat Program newsletter Echolocator [PDF] (exit DNR).

White, a conservation biologist with the DNR Natural Heritage Conservation Program, expects more places to notice a lack of bats this summer. "There are some pockets of Wisconsin that have experienced the declines already," he says. "People are telling us they used to have hundreds of bats in their area at night in the summer, and now, nothing." 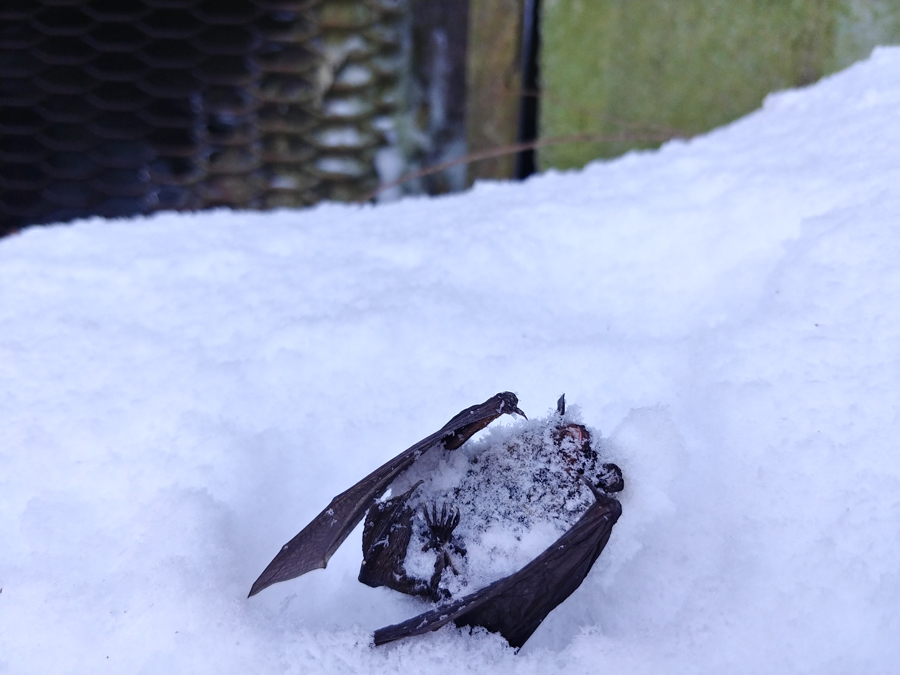 White-nose syndrome causes hibernating bats to frequently wake, depleting their energy and causing them to die from starvation, dehydration or exposure to the elements. Photo credit: DNR

White-nose syndrome does not affect people or other animal species, but causes hibernating bats to frequently wake, depleting their energy and causing them to die from starvation, dehydration or exposure to the elements. Since the discovery of white-nose syndrome in 2006 in New York, more than 6 million bats have died and the disease has spread to 32 states, says Owen Boyle, species management section chief for the NHC program.

While there has been some evidence of bat populations starting to come back on the East Coast, it's too early to tell in Wisconsin, Boyle says. DNR conservation biologists and research partners banded more than 100 bats this winter to be able to keep tabs on them in coming years. The biologists want to understand how many bats survive, if some hibernation sites have better survival rates than others and if surviving bats moved to new hibernation sites, and other information that might help guide bat recovery efforts.

"These animals continue to impress and amaze me, whether it's through their longevity or diversity of diet," White says. "I'm hopeful that they will continue to amaze by being able to persist against insurmountable odds."

DNR conservation biologists continue to assist federal and university research partners pressing to find WNS treatments and vaccines, White says. There is good news on those and other fronts including:

People who want to help cave bats surviving white-nose syndrome are encouraged to build and install a bat house following instructions on the DNR website, to participate in summer bat counts, to donate to the Endangered Resources Fund and to volunteer at the Wisconsin Bat Festival Aug. 25 in Ashland. 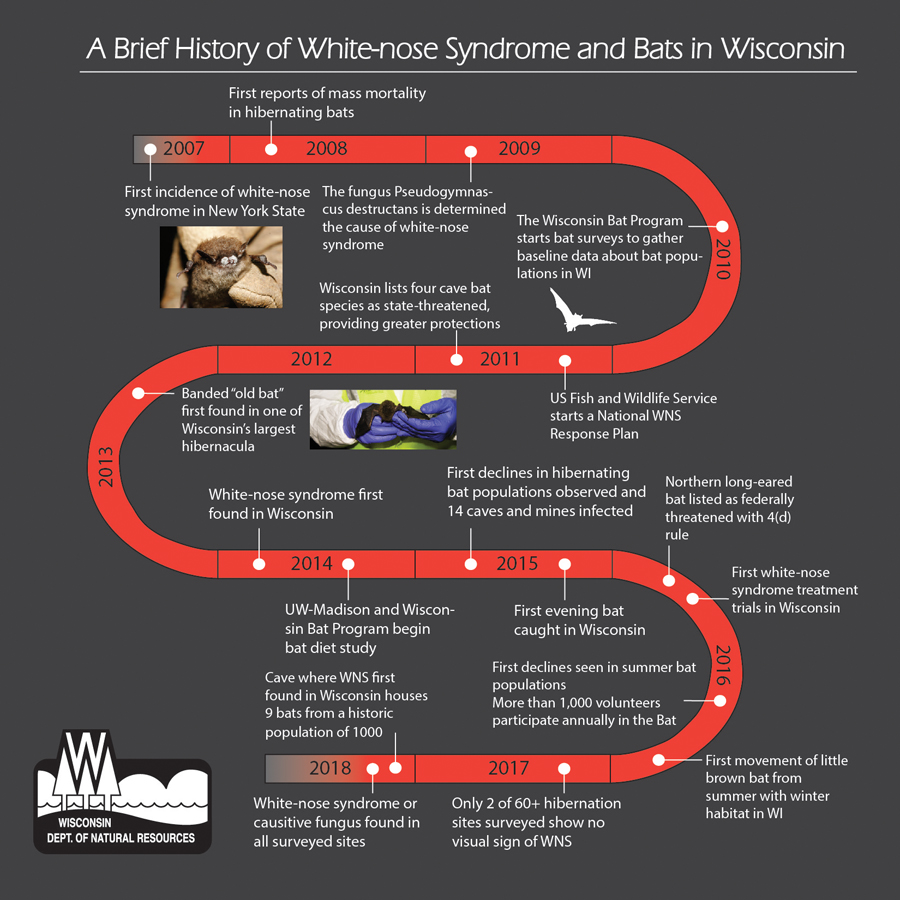 Bat houses provide a warm, protected place for mother bats to care for their young, and they can provide helpful stop over sites in the spring as bats are emerging from their winter hibernation sites and moving toward their summer roosts, and in the fall, as bats move from their summer roosts to their hibernation sites. Find a list of needed supplies, research-based instructions on construction and placement of bat homes, and videos, on dnr.wi.gov and search "bat house."

People are encouraged to participate in the Great Wisconsin Bat Count on June 1-3. Volunteers identify bat roosts and sit outside the roost entrance in the evening to count the bats as they emerge just after sunset, and for the next 40 minutes or so. To learn more and enter your counts, search "Wisconsin Bat Program" (exit DNR) online.

People wanting to donate to DNR's Wisconsin Bat Program to help continue winter surveys and banding of bats, summer habitat research, and research into WNS prevention and treatment can donate online to the Endangered Resources Fund. All donations are matched dollar-for-dollar and are tax deductible. Go to dnr.wi.gov and search "NHC" and click on "donate." Select "bats" from the special funds drop down menu.

Finally, help raise awareness of bats and their importance by volunteering at the 2018 Wisconsin Bat Festival (exit DNR), set for Aug. 25 at the Northern Great Lakes Visitor Center (exit DNR) in Ashland. Contact Jennifer Redell at Jennifer.Redell@Wisconsin.gov for more information about volunteering.