MIDDLETON, Wis. -- A Madison man who gave up a favorite hunting spot to a stranger who unknowingly scouted the same location for an opening day of the nine-day gun hunt with his 9-year-old son was honored recently with the 2016Wisconsin Department of Natural Resources Ethical Hunter Award. 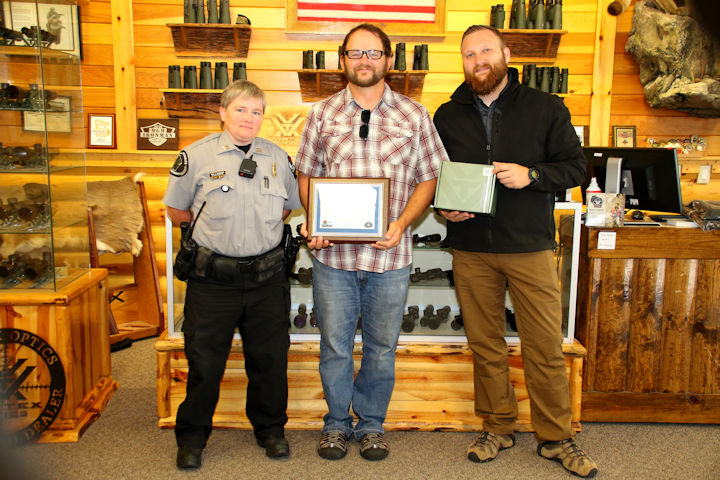 Burns' hunting buddy Dan Lyksett, of Eau Claire was one of two men who nominated him for the annual ethics award. Michael Dettlaff of Stanley also nominated Burns.

As the story goes, on 2016 gun-deer opening day Dan Burns retreated from his cherished deer hunting location on public property in Washburn County when he met Keith Halverson of Esko, Minn., who arrived at the same time at the same location.

The two men realized they had both scouted the same location before the season. Burns had hunted the area numerous times in the years before, and Halverson had scouted it as a good location for him and his 9-year-old son, who also was there at the simultaneous arrival. When Burns realized this, he gave up his spot to the father-son hunters.

Bob Lamb, retired outdoors editor for The La Crosse Tribune who helped create the annual honor in 1997 and continues to serve on the award committee, says the generosity and understanding Burns exhibited is why the award was created.

In partnership of this award, Vortex Optics presented Dan Burns with an outdoors package that included a rifle scope, a pair of binoculars and a range finder -- all items the award committee views as helping hunters see the outdoors more clearly.

Each year, anyone in the public can nominate a licensed Wisconsin hunter for the DNR Ethical Hunter Award for an action that took place during that calendar year. While many nominations are made during gun deer season, the ethical action could be during a squirrel hunt, turkey hunt, waterfowl hunting or any other Wisconsin hunting season.

The licensed Wisconsin hunter nominated need not be helping another hunter, or anyone in the outdoors, but must demonstrate actions that reflect positively on the tradition of hunting, committee member Dewald said.

Past winners have helped wardens, landowners, people lost in the woods and someone unable to drag or load a deer carcass.

The first ethical hunter winner, in 1997, was awarded to a man and young boy who found a registered deer carcass that had fallen off a truck. They gave up most of their opening weekend to get the deer back to the rightful owner.

The selection committee is chaired by DNR chief warden, Todd Schaller. In addition to Lamb and Dewald, Jerry Davis is the fourth committee member and helped found the award.