MADISON - The public can learn more about whooping cranes and their long journey from the brink of extinction during a Wisconsin Department of Natural Resources "Ask the Experts" chat at noon Thursday, May 11. 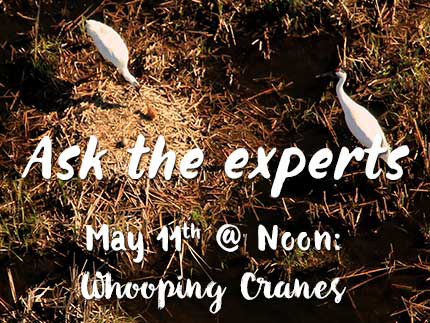 Spring migration is completing, the breeding season is underway and the Whooping Crane Eastern Partnership is busy hatching eggs and monitoring nests across Wisconsin. Efforts are proceeding to again have a group of chicks raised in captivity by adult whooping cranes. Conservation biologists also are optimistic they will get more wild-raised chicks to fledging age.

The WCEP is a group of agencies, non-profit organizations and individuals formed to restore a migratory population of whooping cranes to eastern North America. During the live chat Thursday, experts will be on hand from Wisconsin DNR, U.S. Fish & Wildlife Service, Operation Migration and the International Crane Foundation

Through the efforts of WCEP, there are now 104 whooping cranes in the Eastern Migratory Population. Whooping cranes were on the verge of extinction in the 1940s. Today, there are only about 600 birds in existence, approximately 445 of them in the wild. Aside from the 104 Eastern Migratory Population birds, the only other migratory population of whooping cranes nests at Wood Buffalo National Park in northern Alberta, Canada, and winters at Aransas National Wildlife Refuge on the Texas Gulf Coast. A non-migratory flock of approximately 12 birds lives year-round in the central Florida Kissimmee region, and an additional 58 non-migratory cranes live in southern Louisiana.