Call goes out to report surviving bats this summer

MADISON -- A bat disease that has raced across the eastern U.S. and Canada , killing upwards of 7 million bats, is following the same pattern in Wisconsin, winter hibernacula surveys show.

Twenty-four of 28 counties with known bat hibernacula are now confirmed to have bats infected with white-nose syndrome or the fungus that causes it, and sites in their second and third year of infection are seeing population decreases of 30 to 100 percent. 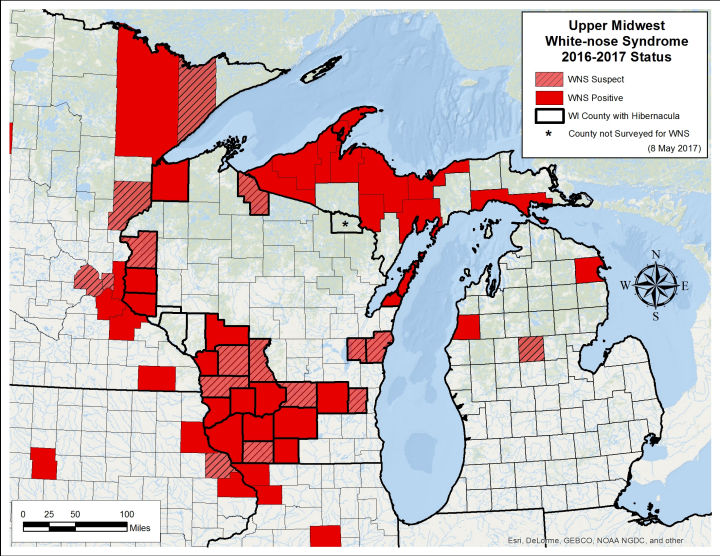 Twenty-four of 28 counties with known bat hibernacula are now confirmed to have bats infected with white-nose syndrome .
Photo Credit: DNR

"The disease has progressed in Wisconsin as it did out east," says Owen Boyle, species management section chief for the Department of Natural Resources Natural Heritage Conservation program. "That doesn't make the numbers any easier to see. The effect of white-nose syndrome on our cave bats in Wisconsin, as nationally, is catastrophic." 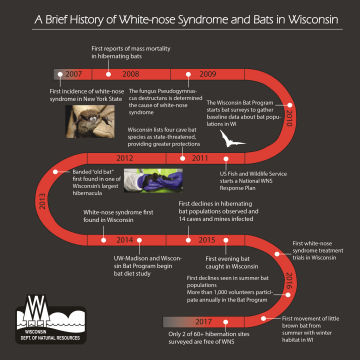 Click on image for a timeline of WNS in Wisconsin and the nation.
Photo Credit: DNR

Numbers declined 40 to 60 percent at two of the state's largest sites, which combined accounted for two-thirds of Wisconsin's known bat population only a few years ago. Some sites have declined even more: DNR surveyors found only 16 bats compared to 1,200 at a Grant County site where the fungus was first detected, which is now in its fourth season.

Bat populations are important to agriculture and ecosystems. A single bat can consume thousands of insects each night, and researchers have estimated that bats save Wisconsin farmers alone $600 million to $1.5 billion on pesticides every year. Studies are underway at the University of Wisconsin-Madison and elsewhere to understand such impacts.

DNR's focus is shifting to finding surviving bats to learn why bats from certain hibernacula may have survived at higher rates, and understand if certain bats are genetically more resistant to the disease than others. These surviving bats are what will help species rebound after white-nose syndrome, says Paul White, who leads DNR's bat efforts for the Natural Heritage Conservation program.

"Now it's our job to see what's still here and how we can help," White says. "We're not ready to give up hope that we will continue to find survivors and we want the public to remain an important part of telling the story of how bats come back." 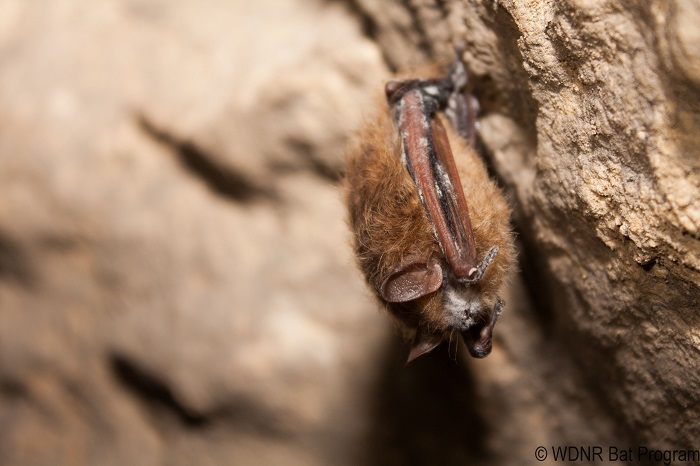 White-nose syndrome is named for the powdery white fuzz that develops on hibernating bats' noses, ears and wings during infection with the fungus Pseudogymnoascus destructans. The fungus causes bats to wake more often during hibernation, thus burning up critical stores of fat they need to survive winter.

People can help surviving bats by building and installing bat houses; avoiding disturbing bat roosts between June 1 and Aug. 15, when bats raise their young and helping to monitor bat populations. Most importantly, people can report the buildings where bats are present in summer as well as sites where bats are no longer showing up. Bats continuing to return to summer roosts are likely survivors of WNS. Email location information to DNRbats@wisconsin.gov.

More information on all of these can be found by searching the DNR website for keyword "bats."