ASHLAND, Wis. - As proud father Dave Derusha explains it, one of the great things about fishing on Lake Superior's Chequamegon Bay is that you never know quite what you'll catch. 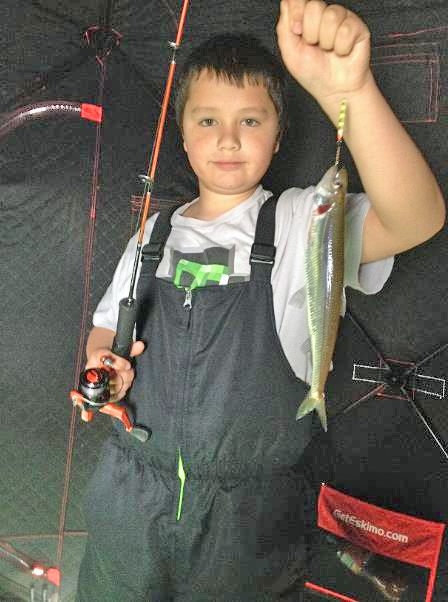 Tanner Derusha, age 9, and his hook and line record rainbow smelt. Tanner, of Odanah, could tell that he had a nice smelt on the line by the way the fish fluttered. But it wasn't until he brought the fish up through the ice and compared it with some of the others that he and his father realized they had something truly special.
Photo Credit: DNR

Some days it might be coho salmon or brown trout, other days possibly walleye, northern pike or splake. And then there are the rainbow smelt.

On one late winter day this year, Derusha and his son Tanner, age 9, were jigging through the ice with slender spoons resembling young perch. The two had already caught a number of smelt, which typically run about 7 to 8 inches, when Tanner felt a slightly stronger tug on the end of his line.

"We had already been catching some of the biggest smelt I'd ever seen in my life," Dave Derusha said. "You can always tell when you have a smelt on the line because they really flutter around. They're actually quite exciting to catch on a light jigging rod."

When Tanner hauled his fish up through the ice and placed it in the bucket, father and son both had reason to get excited when they noticed the smelt was quite a bit bigger than the others. The fish measured 10 1/2 inches long and weighed almost one third of a pound!

"It really was exceptionally large for a smelt, so I pulled out my phone and started checking the internet to see what the record was," Dave Derusha said. "I also made a couple of phone calls from inside our pop-up shelter and eventually realized there wasn't a Wisconsin record category for rainbow smelt. I thought, well, if Michigan has one, Wisconsin should too. So we went ahead and got it weighed and notorized and submitted it. DNR was extremely helpful through the process.

"If somebody gets a bigger smelt next month or next year, well so be it," Dave Derusha added. "Nobody can take away our great memory."

Karl Scheidegger, who coordinates the Wisconsin Department of Natural Resource's state record fish program, said the Derushas' experience proves that age and hours on the water don't always matter when it comes to catching record fish. Wisconsin's productive lakes, rivers and streams continue to generate new records in a variety of categories involving anglers of all ages.

Last year, for example, Noah Boissonneault of Arkdale was bowfishing when he landed a state record quillback carpsucker on the Petenwell Flowage. The fish, counted in the alternate method category weighed in at 12 pounds 4.8 oz. and was 26 inches long.

During 2016, hook and line records were also set for a Lake Michigan pinook salmon (a cross between a chinook and a pink salmon) that weighed in at 9 pounds, 1.6 oz. and measured 27.88 inches, as well as a West Kickapoo Branch River tiger trout, a cross between a brook trout and a brown trout that weighed 1 pound, 11.3 oz. and measured 17.25 inches.

"Heading into this year's general inland season fishing opener on May 6, Wisconsin anglers have every reason to be optimistic," Scheidegger said. "Based on our spring fisheries surveys, we know there are some big fish out there. While our state record musky dates to 1949 and our state record walleye goes all the way back to 1933, records are made to be broken and we're seeing it happen with many species."

Starting on opening day, this year anglers also will have the opportunity to submit fish for a new live release record category. The program aims to provide anglers with the win-win satisfaction of achieving a state record and a successful live release. Scheidegger said the new program is part of a larger effort to promote quality fishing and encourage the careful release of trophy-size popular sport species. Similar efforts have found success in other states and among some national record-keeping organizations.

To learn more about DNR's new live release record category, search the DNR website, dnr.wi.gov, for "live release." Instructions for a harvest record can be found by searching "record fish."

Anglers fishing Lake Superior and all other Wisconsin boundary waters are again reminded they must possess a paper copy of their license and any stamps to be legal. The paper printouts are required so law enforcement officials in the surrounding states can verify compliance with license and stamp regulations.

More information about length and bag limits as well as places to fish can be found on the DNR website, dnr.wi.gov, by searching "Fishing Regulations."