MADISON -- As they begin to swim up and gulp down their first few meals after hatching, the young Skamania steelhead at Kettle Moraine Springs State Fish Hatchery are making important progress toward Wisconsin Department of Natural Resources goals of ensuring a diverse Lake Michigan fishery.

The fish, hatched from eggs provided by the state of Indiana as part of cooperative interstate management efforts, represent the first batch of Skamania steelhead to be reared in the state hatchery system since 2008. Over the next three to five years, DNR fisheries managers intend to continue collecting eggs from Indiana to stock the Kewaunee and Root rivers with some 35,000 fish each. 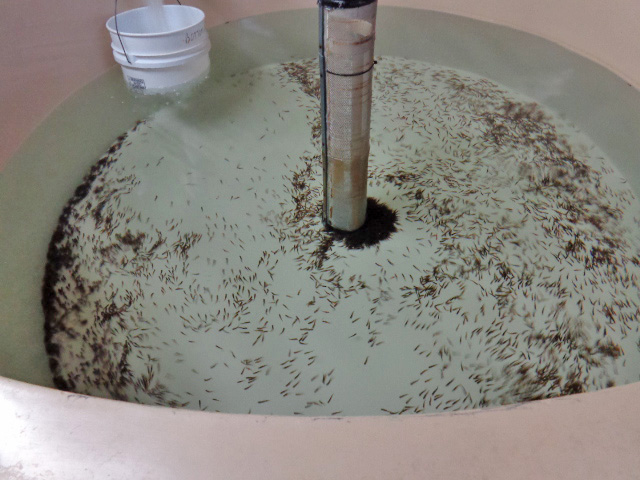 These rivers will then serve as collection points for a population of steelhead that will provide enough genetic diversity for Wisconsin to sustain its own egg collection and rearing efforts.

Dave Giehtbrock, DNR fisheries propagation section chief, said the Skamania strain is particularly prized because the fish may reach 32 inches and 12 pounds at age five - larger than either the Ganaraska or Chambers Creek strains. Skamania also extend in-stream and nearshore fishing opportunities because they become more active when the water starts to cool in mid‐September and spawn from mid‐December through mid‐March with the peak occurring in January and February. In addition, late summer rains in July and August can pull Skamania in from the lake, providing unique fishing opportunities in late summer.

"We appreciate the mutual support from the state of Indiana and over the years, the exchanges of Indiana steelhead eggs and Wisconsin chinook and coho eggs have created new opportunities for all Lake Michigan anglers," Giehtbrock said. "By reactivating the Skamania program now, we're hoping to establish sufficient populations in the two broodstock rivers to allow for egg collection and rearing when the Kettle Moraine Springs hatchery is fully rebuilt."

Giehtbrock said staff from DNR's Nevin Hatchery and central office traveled to Indiana in late January to help collect egg with the Indiana DNR. Together, the team spawned 40 females that provided about 164,000 "green" or fertilized eggs. DNR staff then drove the eggs back to the Kettle Moraine Springs Annex where they were incubated and fish health paperwork was completed.

"The drive back was a bit nerve-wracking for staff because the water had to be kept very cold and there are always concerns about traffic, but in the end everything went smoothly," Giehtbrock said. "The fish hatched out at 93 percent and at this point, they are looking good."

In the past, because of the unique biology of the Skamania, broodstock were captured in September and held at the Kettle Moraine Springs hatchery prior to spawning. The need to hold fish prior to spawning presented a biosecurity problem that put all of the yearling fish production at risk due to diseases such as viral hemorrhagic septicemia or VHS.

In 2008, DNR made the decision to discontinue the production of Skamania until a biosecure area to hold the brood could be designed and built at the Kettle Moraine location. The effort to stock the brood collection rivers with this strain of fish is underway now so that gametes will be available to maximize the production of fish once renovations are complete at Kettle Moraine Springs.

Giehtbrock said DNR fisheries managers believe the additional effort is a good investment in the future of the Lake Michigan fishery. Skamania, Ganaraska and Chambers Creek steelhead were all stocked continuously from 1988 to 2008 and provided an excellent, nearly year-round fishery in Lake Michigan and its tributaries thanks to the different spawning times of the strains.

A redesign of the Kettle Moraine Springs hatchery is currently underway with plans calling for a biosecure area large enough to rear all three strains of steelhead. The fish now being raised are scheduled for stocking in the spring of 2018 with anticipated maturity ranging from 2020 to 2022.

Steelhead and rainbow trout are the same species of fish, but those living in Great Lakes tributaries undergo a process called smoltification to prepare for life after leaving their natal streams and entering the larger lake environment. Steelhead were introduced into the Wisconsin waters of Lake Michigan as early as 1884 but the program gained support as the recreational fishery grew in importance following the introduction of coho and chinook salmon in the 1960s.

Steelhead are native to the western U.S. where they inhabit the coastal waters. Skamania were developed at the Skamania hatchery in the state of Washington while Chambers Creek originated at Washington's South Tacoma hatchery and Ganaraska have become naturalized in Lake Ontario.