RHINELANDER, Wis. -- Good news for Wisconsin's bald eagles and the people who love to watch them: a record number of occupied nests were observed in spring surveys, signifying the state's largest population since surveys started in the 1970s, according to the 2016 Bald Eagle and Osprey Survey Report [PDF] released today. 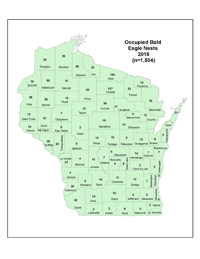 The survey results continue to document the raptors' comeback from the brink of extinction in the 1960s and 1970s, to removal from the state threatened and endangered species list in the 2000s, to healthy and growing populations today.

"The recovery of bald eagles in Wisconsin is a great conservation success story and one that more Wisconsin residents are seeing up close as eagles expand into new territories," says Drew Feldkirchner, who leads the DNR Natural Heritage Conservation program. "We're also very pleased to see osprey numbers continue to climb and appreciate our partnership with utility companies and other partners to provide artificial nesting platforms for these birds."

Osprey populations in Wisconsin declined dramatically from the 1950s to early 1970s in response to pesticides and the loss of suitable nest habitat - tall trees or snags - as lake shorelines were developed and trees were removed. Now, 75 percent of Wisconsin osprey nests are built on artificial platforms erected on utility poles, cell phone towers and other tall structures.

The 2016 effort marked the 44th consecutive year that the bald eagle occupancy survey has been completed in Wisconsin, which makes it one of the longest running surveys of its kind in North America. DNR staff from the Natural Heritage Conservation and Wildlife Management bureaus completed statewide aerial nesting surveys for bald eagles and ospreys in cooperation with DNR pilots in March and April 2016, according to Laura Jaskiewicz, the DNR research scientist who coordinates the survey and report from Rhinelander. 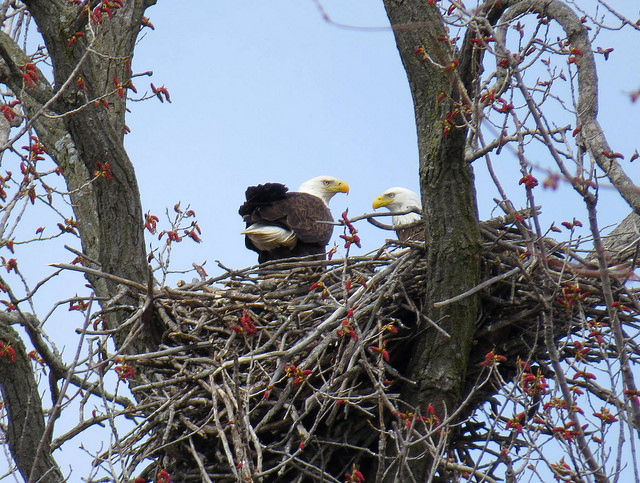 Bald eagle nesting begins in late January and early February in the Midwest. In 2016, DNR biologists found the highest number of occupied eagle nests in the 44 years of aerial surveys.
Photo Credit: DNR

Jaskiewicz says the number of occupied nests continues to rise in northern Wisconsin, the heart of eagle country due to abundant lakes and rivers, and in southeastern Wisconsin, where the proportional increase was the largest in the state.

Southeastern Wisconsin has historically had a smaller population of nesting eagles, and this increase in nests, from 11 to 17, may be due to eagle numbers in the north getting close to carrying capacity, so their range is reaching farther than it previously has, she says.

Occupied eagle nests were observed in 69 of 72 (96 percent) counties, with Vilas and Oneida counties continuing to have the most nests.

The 2016 midwinter eagle survey -- some counts done by air by DNR pilots and biologists and others done by DNR staff and volunteers on foot, in cars or in boats -- showed an impressive 87 percent increase in wintering eagles across the state of Wisconsin over the previous winter's count. This increase may have been due to the unusually mild winter enabling more eagles to stay in the state; typically, eagles will move south and congregate along major rivers near open water areas by dams, Jaskiewicz says.

Winter eagle-related events and activities draw tourists, and communities hosting them have lifted the state's visibility as an ecotourism and bird-watching destination. The Ferry Bluff Eagle Council conducted identical economic surveys of eagle watchers in 1994 and 2004 in the Prairie du Sac area and found that about $1,144,000 was generated by visitors throughout the three-month eagle season in 2004, during a time that otherwise would be a slow tourist season for community businesses. That figure represented a 20 percent increase, adjusted for inflation, over the economic impact in 1994. A third economic study is underway now.

Because eagle and osprey populations are healthy and growing, this year DNR did not conduct the second aerial survey it has done in past years to assess the reproductive success of the breeding pairs. Resources are being redirected to other non-game species needing field surveys.

"The reason we continue to survey the statewide nesting eagle and osprey populations is to provide accurate locations of eagle and osprey nests within the state," Jaskiewiczsays. "It's important that we keep our data as up to date as possible so that we can give property owners and managers the best guidance to effectively protect nesting eagles and ospreys."

Eagle nests are federally protected by the U.S. Fish and Wildlife Service's Bald and Golden Eagle Protection Act and the Migratory Bird Treaty, which celebrated its centennial in 2016.

Citizens and organizations can help make sure these important annual surveys continue by sponsoring an eagle nest or purchasing a new eagle license plate, which provides a $25 annual donation to the Endangered Resources Fund. Search the DNR website, dnr.wi.gov, for "eagle plate" for more information.

DNR's Adopt-An-Eagle Nest program allows sponsors, for a minimum contribution of $100, to receive an adoption certificate, an aerial photo showing the location of your eagle nest, results from the surveys and a full-color eagle calendar. Go to dnr.wi.gov and search "AEN" for more information.