This survey information, along with the U.S. Fish and Wildlife Service continental duck survey and the Ontario Canada goose survey provides information regarding yearly waterfowl breeding conditions and is used to determine the fall season structure for Wisconsin. The full Waterfowl breeding population survey for Wisconsin, 1973-2016 [PDF] [PDF] can be found at dnr.wi.gov, keywords "waterfowl management."

In 2016, warm weather arrived in March, which was earlier than conditions seen the previous two years - this triggered migration and breeding activity by mallards and Canada geese. However, cold temperatures in April and early May stalled migration for blue-winged teal and several diving duck species. These changing weather and migration factors make it difficult to schedule the breeding survey to effectively survey all species. 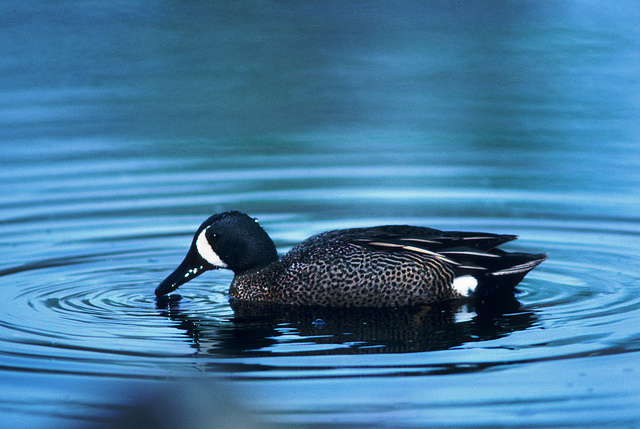 With considerable precipitation in May following the survey, wetland conditions improved in time for brood rearing, and Wisconsin is expected to provide good duck production in 2016.

A very mild winter in 2015-16, combined with below normal rainfall in March and April, led to dry wetland conditions throughout Wisconsin. Counts indicated drier conditions than in 2015 in the southern and central areas of the state. According to Van Horn, considerable rainfall in May following the survey has helped Wisconsin remain at average wetland conditions for the year during the important brood-rearing period.

The Wisconsin breeding duck population estimate of 390,498 represents an increase of five percent compared to 2015, but 12 percent below the long-term (43-year) average. None of the species-specific population estimates for the three top breeding ducks in Wisconsin (mallard, blue-winged teal and wood duck) were statistically different compared to 2015.

"Each duck species population estimate normally varies from year to year, so I urge hunters and other conservationists to interpret this information over several years and in the continental context," said Kent Van Horn, DNR migratory bird ecologist. "For example, the blue-winged teal breeding population in Wisconsin is lower than historic levels, but continental estimates the last few years have reached all-time highs, and two-thirds of Wisconsin regular duck season blue-winged teal harvest comes from out of state."

Roughly 70 percent of mallard harvest in Wisconsin is supported by locally hatched ducks, and the average mallard population in the last few years has been lower than the previous decade. This observation suggests that continued efforts aimed at controlling mallard harvest impacts and support for grassland nesting habitat conservation are important to the future of Wisconsin's local mallard population.

Wisconsin Canada goose harvest is supported by Canada geese breeding in northern Ontario, as well as those breeding locally in Wisconsin. The Wisconsin breeding estimate for Canada geese is similar to 2015 and consistent with a stable population of roughly 120,000. Estimates from Ontario will be available in July, and continental breeding waterfowl population estimates from the U.S. Fish and Wildlife Service survey are expected to arrive in July.

In August, Wisconsin will join Alabama, Arkansas, Illinois, Indiana, Iowa, Kentucky, Louisiana, Michigan, Minnesota, Mississippi, Missouri, Ohio, Tennessee, and the Canadian provinces of Manitoba, Ontario, and Saskatchewan as the Mississippi Flyway Council to analyze survey data and provide recommendations to the U.S. Fish and Wildlife Service regarding waterfowl hunting regulations for 2017 seasons. These recommendations will help determine the framework under which states and provinces set waterfowl hunting seasons.

Under new federal framework, Wisconsin conducted its annual waterfowl season hearings this spring, and the Natural Resources Board approved department proposals for season structure at its April 12 meeting.

"Since this new federal framework is using data based on the prior year's breeding survey estimates, we can now propose and approve the waterfowl season several months before we have in the past," said Van Horn.

With earlier approval dates, 2016 migratory bird season regulations [PDF] are currently available online and at many license vendors throughout Wisconsin.

With the department's transition to Go Wild, the Canada goose harvest registration phone number is now consistent with all other species registered in Wisconsin, and this new system provides for online registration. Hunters will now register online at gamereg.wi.gov or via phone at 844-426-3734 (844 GAME-REG). Registration within 48 hours of harvest is mandatory for all Canada geese harvested.

Canada Goose Hunting Permits are now printed on paper. Immediately upon killing a goose, the hunter who killed the goose must validate their Canada Goose Hunting Permit. Validation is accomplished by crossing off one date for each Canada goose taken. Failure to follow validation procedure makes the possession of the goose illegal. Hunters are responsible for keeping their permits legible and may wish to consider protecting their permit in a plastic zip-top bag.