MADISON - A number of key external partners and Wisconsin Department of Natural Resources staff members received awards for their work in 2015 at the Bureau of Wildlife Management's annual statewide meeting March 1, 2016. 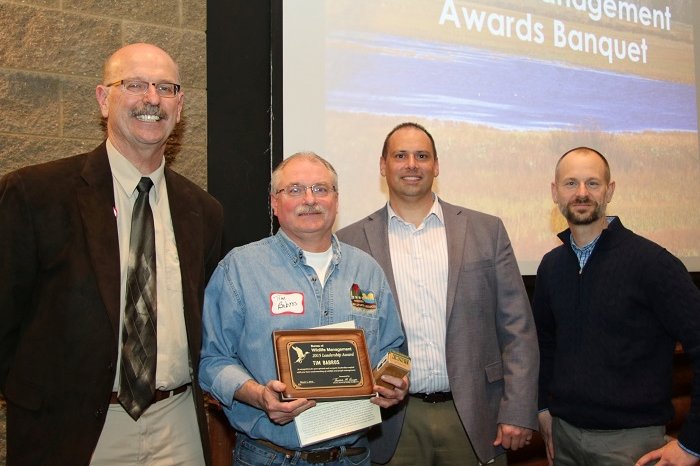 Lichtie works closely with local groups and the general public to address a number of wildlife issues in the La Crosse area. He is a leader in education and outreach strategies to assist the public and develop strategies to deal with potential wildlife conflicts. Lichtie has provided rewarding hunting opportunities for a number of individuals with disabilities in the La Crosse area, and has used his reputation within the community to act as a great representative for the Bureau of Wildlife Management and Department of Natural Resources as a whole.

Erin Grossman, a wildlife technician in Bancroft, received the 2015 Wildlife Technician Award. Grossman was recognized for her passion for wildlife management and teamwork across a number of projects. She is an expert in grassland management, and initiated a large-scale rotational grazing project in conjunction with a local certified grazing expert, attracting positive attention from the conservation and the agricultural communities. She has the ability to form invaluable relationships and gain support from local landowners.

Babros, a wildlife supervisor in Jackson County, was recognized for his role as a mentor to a number of past and present department staff. He has enjoyed a 32 year career with the department, with projects ranging from heavy equipment training to chronic wasting disease monitoring. Babros' leadership helped spearhead a six year, three-phase cooperative effort with the Friends of McGilvray Road at the Van Loon Wildlife Area to lower portions of the roadbed for flood mitigation and restoresome of the historic floodplain connectivity.

Justin Blindert and Kevin Wallenfang each received a 2015 wildlife conservation excellence award from the Bureau of Wildlife Management.

Blindert, a wildlife technician in Washington County, received the limited term employee excellence award and is known for his strong work ethic and stellar customer service. In his time at DNR, he has shown that he can adapt to a number of different situations and challenges throughout his career with the department. Blindert's responsibilities include posting property boundaries, burning, mowing firebreaks, treating invasives, conducting surveys and stocking pheasants. He also acts as a liaison for the Voluntary Public Access and Turkey Hunter Access programs, where he works closely with landowners.

Wallenfang, the department's big game ecologist, received the permanent employee excellence award for his work on a number of key projects and initiatives within the Big Game Program. He is known for his positive attitude and ability to work well with key stakeholders and the public. Wallenfang and his team are responsible for coordinating the current elk reintroduction project and working with counties in Wisconsin through County Deer Advisory Councils.

Nelson and Leonard were recognized for their extraordinary contributions to Wisconsin Wolf Monitoring and the Volunteer Carnivore Tracking Program. They have been a fixture within each of these programs for a number of years, and play a key role in Wisconsin's wildlife management.

The City of Muskego, represented by Tom Zagar, was recognized for its exceptional wildlife conservation partnership efforts in southeast Wisconsin. Muskego partnered with the department in 1995 to help transform Big Muskego Lake into a thriving habitat for fish and wildlife species. The city provided logistical and financial support and aided in development of management plan. This plan still guides lake management today and for the future, and the city continues to help monitor indicators identified in the plan.

Sexton, a key member of current elk reintroduction efforts in Wisconsin, is a wildlife biologist for the Wisconsin Ho-Chunk Nation in Black River Falls. She helped secure both federal and tribal funding for the current elk reintroduction project, and has acted as a key ambassador for the Ho Chunk Nation in a number of wildlife-related projects. In addition to her role in restoring elk to the Jackson County landscape, her efforts are help preserve heritage and instill cultural values in Ho-Chunk Nation youth.

McNally was recognized for his work with the Friends of Crex Meadows in northern Wisconsin. Over the years, he has donated an incredible amount of his time as a volunteer in the area. McNally has played a key role in a number of fundraising and land acquisition efforts, and was previously recognized as the Friends of Crex Volunteer of the Year in 2007 and Exceptional Volunteer of the Year in 2013.