STEELHEAD SETTING UP FOR SPRING RUN IN BOIS BRULE, OTHER LAKE SUPERIOR TRIBUTARIES

SUPERIOR, Wis. - Anglers can look forward to the possibility of a good bite and a fair fight as the spring steelhead run approaches on the Bois Brule and other Lake Superior tributaries.

Among the reasons to look forward to the upcoming season? Wisconsin Department of Natural Resources biologists reported an increase in steelhead numbers during the fall 2015 count and anticipate better access to the water as much of the snow has melted, said Paul Piszczek, a DNR fisheries biologist in Superior. 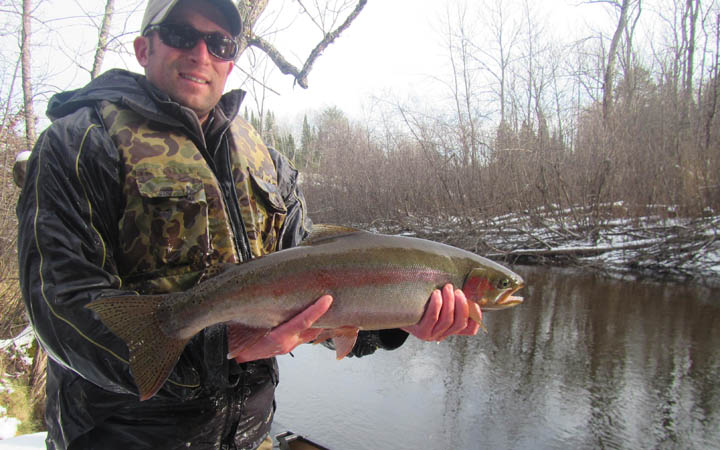 "The fall 2015 run was the highest fall return since 2010," Piszczek said. "For nearly nine consecutive weeks starting in September, steelhead exhibited movements of 400 or more fish past the Brule fishway. This is a marked improvement over the past three of four fall seasons, when steelhead counts exceeded 400 fish for only two or three weeks."

From July 1 through Dec. 31, 2015, a total of 5,660 steelhead passed through the fishway monitoring site, up from 3,036 the previous year. The steelhead significantly outnumbered the 3,930 brown trout and 1,680 coho salmon observed then.

More than 60 percent of the steelhead counted ranged from 20 to 25 inches long. Another 25 percent exceeded 26 inches, the legal minimum length to keep a fish when the season opens this Saturday, March 26.

Steelhead trout are members of the family Salmonidae, which includes coho and chinook salmon. Unlike salmon, however, steelhead typically live six to eight years and may spawn more than once in their lifetime. They mature in three to five years and after gaining size while feeding in the open waters of the Great Lakes, they return to their natal streams to spawn.

Steelhead are a lake-run form of rainbow trout that undergo a physiological conversion process to prepare for living in the lake. Once in Lake Superior, steelhead gain access to more space and forage than the trout that remain in the Brule River. As a result, steelhead attain larger sizes than the resident rainbow trout that spend their entire lives in the river.

Piszczek said the Bois Brule River sports a two-season run of steelhead each year from Lake Superior. Some fish return in late fall to overwinter in the lower reaches of the river, while others begin returning in late March. Spawning typically occurs in April.

Although steelhead are not native to Lake Superior - they were introduced in the mid-1890s by state and federal agencies concerned about declining populations of native brook trout - they now reproduce naturally and have established a self-sustaining population. With the legal-size fish often exceeding eight pounds, this world class fishery generates some 33,000 angler visits per year, Piszczek said.

As a result, the prized fishery bears close watching by DNR fisheries biologists who in recent years have focused efforts on restoring spawning habitat, increasing in-stream living space for the fish and conducting fish surveys.

DNR monitors the adult steelhead run by operating a video recording system at the Brule River sea lamprey barrier and fishway. Fish are counted during the fall and spring. The barrier was installed in 1986 to keep lamprey from spawning in preferred areas upstream from the barrier.

In addition to the headcount, DNR is planning an angler creel survey in fall 2016 to document fishing pressure and fish harvest. Given the higher fish count and other factors, Piszczek said he anticipates a good showing by anglers this year.

"The higher fall steelhead count combined with the size of fish we are seeing has many anglers anticipating some of the better steelhead fishing we've seen in several years," Piszczek said.