MADISON - State officials are asking observant citizens to be on the lookout for resurgent populations of purple loosestrife - an exotic and potentially destructive wetland perennial - and to consider joining the battle against this harmful invader. 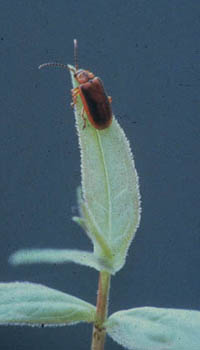 The best weapon against purple loosestrife is the leaf-eating Galerucella beetle, an import from Europe. Careful research in Wisconsin for more than a decade has shown these little brown beetles target purple loosestrife while posing no threat to other plants. Their extensive feeding reduces plant height and seed output when they are present in large numbers.

However, the early arrival of spring can disrupt the life cycle of this specialist beetle and impede its work to control purple loosestrife.

"Early warm weather can bring beetles out to reproduce more quickly than usual, often before loosestrife in the field - or in volunteers' beetle-rearing pots - is sufficiently large to keep them adequately fed," said Brock Woods, wetland invasive plant coordinator for the Wisconsin Department of Natural Resources.

This reduces the number of new beetles produced and in turn allows purple loosestrife to grow taller and produce more seeds for dispersal to new sites.

Purple loosestrife has been a serious exotic invader of state wetlands for decades. When uncontrolled, it grows taller than native plants, spreads prolifically and quickly dominates invaded wetlands. It degrades wildlife habitat and displaces native animals. It can choke waterways, making them difficult to navigate.

"We need help from Wisconsin residents to turn back the recent gains made by purple loosestrife," Woods said.

Woods said the state's purple loosestrife biocontrol program, run by DNR and the University of Wisconsin-Extension, is seeking individuals and groups to help raise these special beetles and to report any local increase of this invasive plant with its striking purple flower spikes. 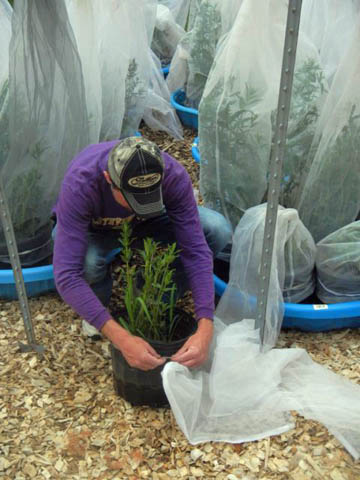 "We need citizen cooperators, perhaps some who have released beetles in the past, to put more beetles out on old release sites if loosestrife there has become more vigorous, and to help release them into new loosestrife patches."

Free equipment and starter beetles are available to anyone interested in helping.

"Raising and releasing these safe and effective beetles is a fascinating and easy project," Woods said. "To be effective, projects must start early in spring when local wetlands with loosestrife thaw out."

People interested in helping can learn more about the project online by visiting the DNR website, dnr.wi.gov, and searching for "purple loosestrife biocontrol" or by contacting Woods at 608-266-2554 or at brock.woods@wisconsin.gov. Additional information about exotic, harmful plants and how to report them can be found on the DNR website by searching for "invasives."