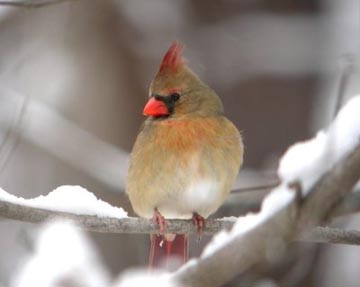 The Northern cardinal is among the species now beginning to show signs of early breeding activity across Wisconsin.
Photo Credit: Nick Anich

Anich and other survey organizers are encouraging all Wisconsin birders and wildlife watchers to submit breeding observations to the project to capture these early sightings. They also urge current and potential participants to join them in a weekend-long symposium taking place April 1-3 near Wausau to kickoff the second year of the survey.

"This statewide effort is critical for conserving the birds of Wisconsin. It is important that anyone with an interest in Wisconsin's birds joins the effort, and the Kickoff is a great way for newcomers to the project to get up to speed, and for veteran atlasers to learn how they can delve deeper into the project this year," says Anich.

The survey is the follow-up to a first Atlas conducted from 1995-2000. Information collected during that period is still used in species conservation and land management planning today, but changes in habitat and anecdotal shifts in bird populations make it important to get a more current picture of Wisconsin's breeding bird population, says Ryan Brady, science coordinator for the atlas survey and research scientist with DNR.

"We are already seeing indications that some species are expanding their range, while others appear to be contracting," says Brady. "However, it's still early in the project, and we have a lot of locations that need additional coverage. 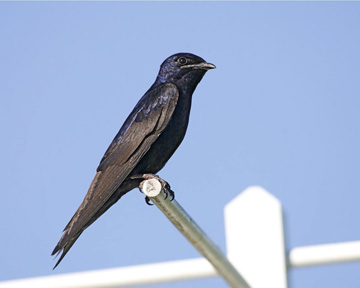 The benefits of having comprehensive atlas data extends to all Wisconsin birds, the abundance and habits of which are captured in a standardized form accessible to current and future scientists for understanding and conserving birds.

Changes in land use, expansion of invasive species, and various forms of human development continue to have impacts on our birdlife, other wildlife, and natural resources, says Brady. The atlas will play key role in assessing some of those impacts for more than 200 bird species.

All birders encouraged to help

More than 700 volunteers documented over 1.8 million birds of 229 species in the first year of the five-year survey to document breeding bird distribution and abundance. This included eight species not confirmed as breeders during the first bird atlas. This year, Brady and other organizers hope to grow their volunteer base to more than 1,000 participants and increase participation from areas of the state where little to no data was submitted in 2015 and relatively few birders reside.

"Now that we're into the second year of the survey, we really want to focus on the northern and western parts of the state, and some central counties, to continue to fill gaps in coverage," says Kim Kreitinger, president of the Wisconsin Society for Ornithology. "We need to motivate those birders in less-populated areas, and encourage our birders from well-covered areas to take a few road trips to help us out this season." 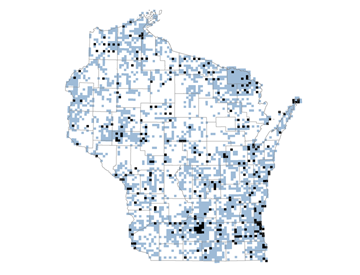 This map shows in white those areas of Wisconsin where volunteers are needed to survey birds. Black areas represent those with the most volunteer effort in 2015, the survey's first year, followed by those with blue. The survey runs five years. Click on image for larger size.

Survey participants collect data by observing birds, noting the date and location, and entering their sightings online into an eBird database specially developed for the project by the Cornell Lab of Ornithology. The records are then checked by a team of professional and volunteer ornithologists. When the project is completed the data will be published in a hard-copy book and online, and the dataset will be available for use by researchers, land managers, and others working to conserve birds and their habitats.

The Season 2 Kickoff will take place April 1-3 at the Stoney Creek Hotel & Conference Center in Rothschild. Highlights of the weekend include field trips, specialized training geared to both first-time and returning atlas contributors, tips from the experts, eBird workshops and more.

For a complete list of events and speakers, visit http://wsobirds.org/season-2-atlas-kickoff

To learn more about how you can support or participate in the survey, visit wsobirds.org/atlas (exit DNR).