MADISON - The second year of Wisconsin's elk reintroduction effort is now complete for the 2016 season, and 40 elk currently await transport to their new home in Jackson County.

The elk are currently being held in a pen in Kentucky, where they receive daily care and monitoring. They will undergo a stringent quarantine and health testing period of at least 120 days, including an acclimation period in Wisconsin, before their release into the area in and around the Black River State Forest of Jackson County. 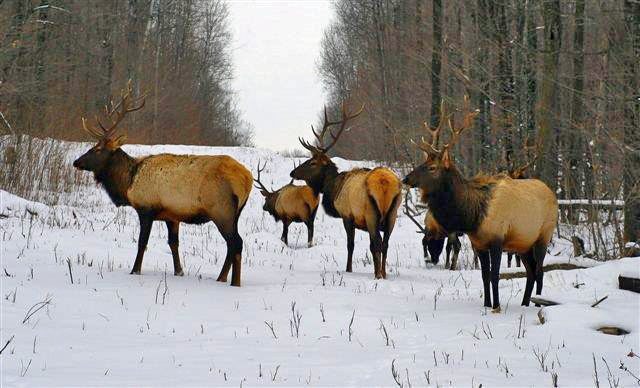 The goal of the reintroduction project is to establish a second elk herd in central Wisconsin, similar to the existing herd in northern Wisconsin--pictured here earlier this winter--which wildlife biologists hope to bolster with future reintroduction efforts.
Photo Credit: WDNR Laine Stowell

"With two elk herds now on the landscape, the Wisconsin Department of Natural Resources and our partners will continue efforts to bring more elk to Wisconsin, and in the process, give the people of Wisconsin yet another reason to head into the outdoors and explore everything Wisconsin has to offer," said DNR Secretary Cathy Stepp.

"We are very happy with how things went in the second year of this project," said Tom Hauge, DNR Bureau of Wildlife Management director. "The majority of this year's class are females, including many adult cows that are likely carrying calves -- this should bode well for herd growth during the early years of the project. Both Wisconsin and Kentucky's wildlife professionals worked extremely hard with safety of the elk and staff as the top priority during the trapping effort."

In year one of the translocation project, 23 elk were released in eastern Jackson County. Fifteen of the original Jackson County herd remains, with eight elk lost to vehicle accidents and predation since their release in August 2015.

Wisconsin's elk reintroduction is a multi-year effort with an overall goal of bringing up to 150 elk from Kentucky. The 2016 trapped elk will again be released in Jackson County, while the remaining years of the project will focus on adding up to 75 elk to the Clam Lake elk herd that was established in 1995. The Clam Lake herd began with 25 animals and has grown to approximately 155 elk.

To receive email updates regarding current translocation efforts, visit dnr.wi.gov and click on the email icon near the bottom of the page titled "subscribe for updates for DNR topics," then follow the prompts and select the "elk in Wisconsin" and "wildlife projects" distribution lists.