[EDITOR'S ADVISORY: This news release has been updated with revised figures for the bald eagle survey in southern Wisconsin.]

MADISON - Winter bald eagle counts are underway in Wisconsin and are showing higher numbers than last year in many places, setting the stage for fantastic eagle watching events this weekend in Sauk Prairie and Appleton, state eagle experts say.

"The conditions are looking much better for eagle watching events this weekend than they did a few weeks ago," says Sumner Matteson, a Department of Natural Resources avian ecologist. "Lakes and rivers are freezing up, concentrating bald eagles at open water spots below dams." 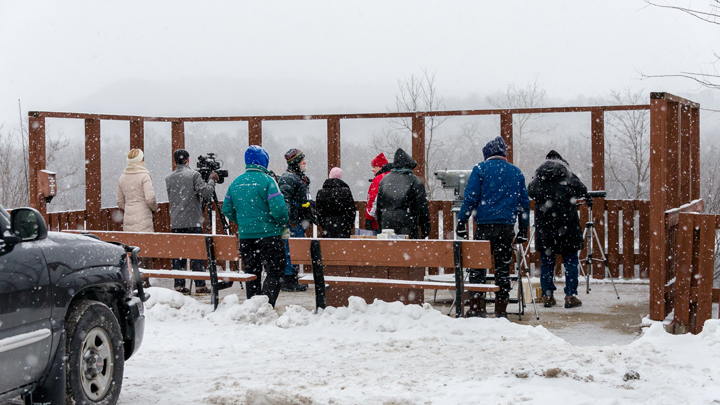 A warm December meant that bald eagles were still hanging around summer roosts in northern Wisconsin because lakes and rivers were ice-free and they had easy access to their main food, fish. For example, the Christmas bird count near Ashland recorded a record number of bald eagles in late December.

The cold snap is good news for Sauk Prairie's Bald Eagle Watching Days, Jan. 15 and 16, and for A Day With Eagles Along the Fox River, held Jan. 16 and 17 in Appleton.

Both events offer eagle watching opportunities at outdoor sites along the Wisconsin River and Fox River, respectively, as well as plenty of indoor activities to see eagles up close through live raptor shows, presentations about eagles and related topics, and displays. DNR co-hosts the Sauk Prairie Bald Eagle Watching Days and many DNR staff members are giving presentations at the Appleton event.

Links to these and other eagle watching events in coming weeks in Cassville, Kaukauna, Prairie du Chien and Ferryville can be found on the Eagle Watching in Wisconsin page of the DNR website. DNR staff participates in these events and encourage people to attend to learn more about eagles as well as other Wisconsin wildlife.

Spring 2015 eagle nest surveys revealed a record number of breeding adults and nests, continuing the successful comeback of bald eagles since their near extirpation in Wisconsin and nationally in the 1960s.

Winter eagle counts are done in Wisconsin and other states in the lower 48 to show trends where eagles stay during the winter and to reveal important wintering habitat, says Laura Jaskiewicz, a DNR Natural Heritage Conservation biologist who is coordinating the winter eagle survey.

Surveyors are to conduct their counts between Dec. 30, 2015, and Jan. 13, 2016, at areas that typically provide good winter eagle habitat. Some surveys are done by air by DNR pilots and biologists. Others are done by DNR staff and volunteers on foot, in cars or in boats.

"Results are still coming in for the 2016 winter eagle surveys and it's too early to tell how the numbers stack up statewide compared to last year," Jaskiewicz says. "We had a record number of eagles nesting in Wisconsin but results from the winter survey can fluctuate greatly year-to-year based on the weather."

Eagle totals reported so far in 2016 show that numbers are up in many places compared to last year. But surveyors caution that eagle numbers change from year to year and week to week based on weather and geography. Here is a sampling of results from the different regions.

Dan Goltz, wildlife biologist stationed in Boscobel, reported that their Jan. 11 flight along the Wisconsin River revealed 165 eagles, nearly tripling the numbers reported in each of the last two years when the river froze much earlier. The greatest concentration, 40 eagles, was observed along the river between Ferry Bluff and Spring Green, Goltz says. Ground surveys by volunteers from the Ferry Bluff Eagle Council found the number of eagles roosting in the Sauk Prairie area doubled in January compared to December.

Brenda Kelly, Mississippi River wildlife biologist, reported 69 bald eagles along the Mississippi River between La Crosse and the Dubuque, Iowa, up from 21 last year and 30 in 2014. "Last year, we were locked up with ice by the end of November." she says. "This past December we had some unusually warmer weather and as a result had more open pockets of water equaling more areas for the eagles to find food on."

Jess Carstens, DNR wildlife biologist in Menomonie who covers an eagle survey route encompassing the Red Cedar and Chippewa rivers, saw much higher numbers this year (29) than last year due to the warm weather. Carstens says those numbers are typical of what is found during mild weather years.

Ryan Haffele, DNR wildlife biologist in Baldwin who conducted eagle surveys in St. Croix and Pierce counties, reported that overall the numbers of eagles observed increased over last year, but the sightings were mainly along the Mississippi and St. Croix rivers along Highway 35 and likely reflected open water left on Lake Pepin. With the recent cold snap, a lot of this open water has frozen, sending the ducks south and scattering eagles across the landscape more.

Aerial surveys on the Fox River Jan. 6 counted twice as many bald eagles as the previous year: 90 in 2016 compared to 40 in 2015, according to Steve Easterly, DNR wildlife technician stationed at Oshkosh. The bulk of the eagles he counted were at the mouth of the Fox River in Oshkosh.

"Last year it was so cold the river had iced up by the time we did the survey. I think the birds all boogied south," he says.

Citizens and organizations can help make sure these annual surveys continue by sponsoring an eagle nest or purchasing a new eagle license plate, which provides a $25 annual donation to the Endangered Resources Fund. A new printable holiday card is online to make giving the eagle plate even easier and more fun.