MADISON -- While the ice fishing season is off to a slower than usual start this year, anglers can be sure of one thing: when the ice finally cooperates, the northern pike will be waiting.

In many areas of the state, a recent blast of arctic air has arrived just in time to set conditions up for Free Fishing Weekend, which this year runs on Jan. 16 and 17 and allows fishing anywhere in Wisconsin without a license or trout stamp. Ben Heussner, a fisheries biologist for the Wisconsin Department of Natural Resources, said those who decide to give ice fishing a try this weekend will be in for the experience of a lifetime if they find themselves with a northern on the other end of the line. 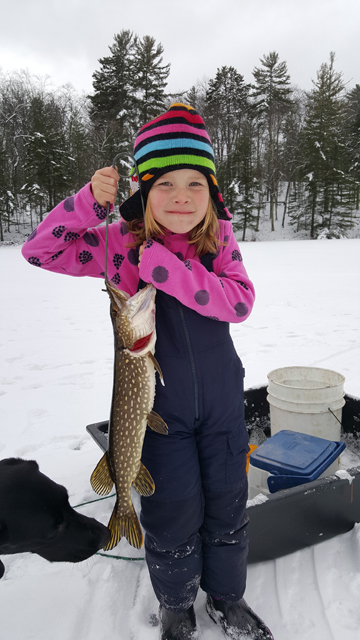 Northern pike put up a strong fight, but this one was no match for Cecelia Toshner, 5.
Photo Credit: WDNR

"Whether you're a seasoned angler or a novice, feeling a northern pike strip the line away under the ice can be an exhilarating experience," Heussner said. "My favorite nicknames for northern pike include 'water wolf' and 'gator' because they truly describe the demeanor of this aggressive predator."

As a cool water species, northern pike remain active throughout the winter season and reports from anglers and fisheries biologists statewide indicate northern pike are now producing more action than walleye or panfish in many areas where ice fishing has gotten underway. Heussner said he recommends using heavy 20 lb. monofilament when fishing for northern pike because of their sharp teeth; it's also helpful to keep a jaw spreader and set of needle nose pliers handy to remove the hook.

Northern pike abundance is widespread throughout the state with most lakes in the southern part of the state south of Highway 10 offering a minimum length limit of 26 inches and a daily bag limit of two. In the north, many lakes carry no minimum length limit and offer a daily bag limit of five northern pike. Anglers are encouraged to check the Guide to Wisconsin Hook and Line Fishing Regulations 2015-2016 [PDF] to be sure of local size and bag limits.

While pike are known for their fight, they also produce flavorful fillets. Heussner said one helpful technique to avoid the "y" bones [PDF] that run along the spine involves breaking the fish down into five separate fillets: one above the top of the spine, two flank fillets on either side of the rib bones and two fillets from either side of the fish from the dorsal fin back to the tail.

With respect to other species, DNR fisheries biologist and sturgeon team leader Ryan Koenigs said he anticipates 2016 will produce another strong class of fish for sturgeon spearing season, which opens Feb. 13 and runs either 16 days or until this year's increased harvest caps are met. A more detailed outlook on spearing season will be provided in the coming weeks for the Lake Winnebago system.

Elsewhere, panfish are the quarry of choice on Otter Lake, a 602 acre impoundment in Eastern Chippewa County that is a popular destination for anglers year round, said Joseph Gerbyshak, DNR fisheries biologist in the region. A recent fishery survey put nearly 60 percent of the bluegill over 7 inches - a great size for the pan. The lake also provides a quality walleye fishery with 74 percent of the walleye captured in the 2014 survey at over 15 inches. 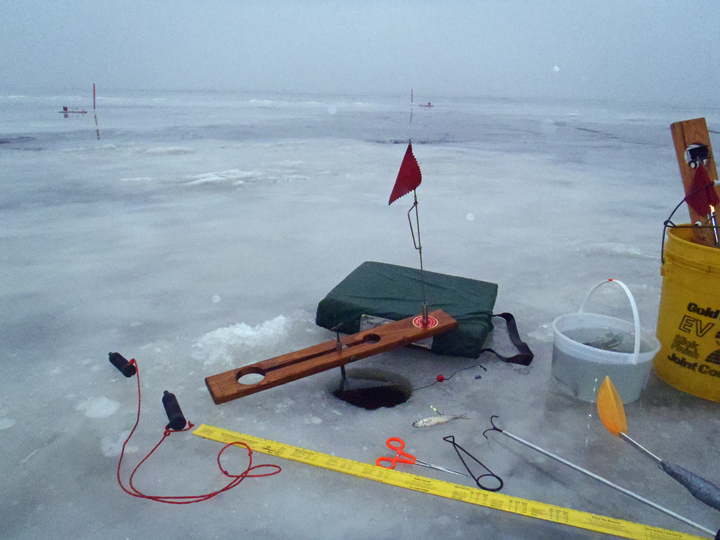 In the central part of the state, DNR fisheries biologist and pike team co-leader Jennifer Bergman anticipates there will be great opportunities in the days ahead on Nepco Lake in Wood County for panfish, northern pike, largemouth bass and walleye. The Eagles Nest Flowage in Juneau County should produce a strong crop of panfish and largemouth bass while Petenwell Lake in Adams and Juneau counties should offer up some nice walleye, catfish and panfish once the ice takes hold.

Still, even in the north, DNR fisheries biologist John Kubisiak urges anglers to exercise great care in picking their spots. Many of the larger, deeper lakes only recently iced over and will not support foot traffic, much less a vehicle. However, the single digit temperatures should help conditions firm up and on some of the smaller lakes of 200 acres or so in size, anglers have been reporting nice catches of perch and northerns.

Even with the colder temperatures, DNR fisheries biologists and conservation wardens are recommending extreme caution on state waters. On many lakes, unseasonable weather has created freeze and thaw cycles resulting in ice that may be several inches thick in one spot, but thin or structurally unsound in other spots.

"Always err on the side of caution and keep a close eye on the ever changing ice conditions," Heussner said. "Do not assume consistent ice throughout the waterbody and be aware that shifting ice can create open water situations."

Ice safety picks, which can be made at home or purchased at many local sporting goods stores, should be carried at all times. A boat cushion or throw with a rope attached offers another measure of safety and doubles nicely as a knee pad when setting up or catching a fish.

DNR does not monitor local ice conditions or the thickness of the ice and encourages anglers and others who will be out on the ice to check in with local bait shops, fishing clubs and resorts. These groups serve winter anglers every day and often have the most up-to-date information on how thick the ice is on local lakes and rivers, as well as areas that are especially dangerous.

Other ice safety tips include:

Residents and nonresidents are welcome to fish anywhere in Wisconsin without a license or trout stamp during the upcoming Free Fishing Weekend on January 16 and 17. The event covers all inland waters and Wisconsin's side of the Great Lakes and Mississippi River. Other fishing rules apply, such as limits on the number and size of fish you can keep and any seasons when you must release certain fish species.

To learn more, visit dnr.wi.gov and search "Free Fishing Weekend." For those without equipment, DNR offers ice fishing tip-ups and jigging rods at many state parks and DNR offices.

Ice augers are not available. Theresa Stabo, DNR fisheries outreach coordinator, suggests claiming an abandoned hole, or better yet - making friends with the anglers at the nearest ice fishing shanty and asking them to drill a hole or lend an auger. Check out the list of loaner sites to find out where tackle loans are available.

For novices who would like to continue the thrill of "hard water" fishing after Free Fishing Weekend, "first-time buyer" resident licenses are available for just $5. Fishing licenses can be purchased through the Online Licensing Center on the DNR website, at all authorized license agents, and at DNR Service Centers (Hours for service centers vary; check the DNR website for service center days and hours of operation; DNR Service Centers are not open on Saturdays).