RHINELANDER - Wisconsin's eagle population continues to soar, with statewide aerial surveys in 2015 documenting a record number since the surveys started 43 years ago, according to the Wisconsin Bald Eagle and Osprey Nest Surveys 2015 report [PDF] released earlier this month.

"It's certainly a great story," says Jim Woodford, one of the eagle surveyors and a section chief for the Department of Natural Resources' Natural Heritage Conservation Program. "Eagle populations have recovered from near-extinction in Wisconsin in the 1970s thanks to protections and a cleaner environment, and their numbers continue to increase and exceed our expectations.

"Ten years ago we thought 800 breeding pairs were likely but the current total is well over that. We've seen them recolonize almost every county in the state while increasing even in those areas where they're likely reaching carrying capacity and running out of room."

The aerial surveys found 1,465 bald eagle nests occupied in 2015, 121 more than in 2013, the last year in which a statewide survey was conducted, the report says. 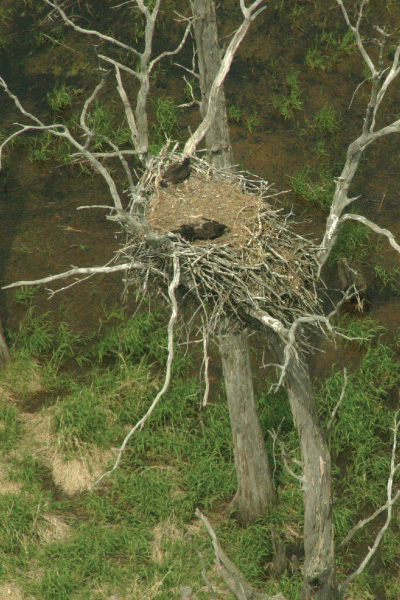 DNR pilots and biologists from the agency's Natural Heritage Conservation and Wildlife Management programs conduct the surveys in late March and April and consider a nest occupied if they see incubation, eggs, young or a repaired nest. Landowners, birders, volunteers and raptor banders provide more ground observations to supplement and check aerial data.

As in past years, Vilas County, with 162 nests, and Oneida County, with 143, had the highest number of occupied eagle nests. These two counties represent most of the Northern Highland Ecological Landscape, which has one of the highest concentrations of lakes in the world. Bald eagles usually build their nests in tall trees near lakes and streams.

DNR pilots and biologists returned to the skies in late May and June 2015 to count young eagles and determine nest success. Observers counted 1,248 bald eagle nestlings and a statewide nest success rate of 66 percent.

A limited osprey survey completed in May 2015 found 167 occupied osprey nests in the 14 counties surveyed. Numbers of nesting ospreys were greater than or equal to numbers observed in 2014 within 11 of the 14 counties, Woodford says. Past statewide surveys have shown osprey populations trending upward, with 2014 recording the highest numbers yet of occupied osprey nests, 542, up from 535 the previous year.

Wisconsin's bald eagle and osprey surveys are one of the longest running wildlife surveys in North America and provide information crucial to protect bald eagles, says Steve Easterly, a DNR wildlife technician in Oshkosh and a surveyor for the past nine years.

"The survey allows the department as well as the U.S. Fish & Wildlife Service to maintain an accurate monitoring tool for eagles, and the population as a whole," he says. "If at some point it (the population) starts to go in a negative direction we will have clear picture of where the population stands and will be able to react to changes faster than not knowing where the "starting point" was."

Easterly and Woodford say the survey information also enables DNR to provide up-to-date information to land owners, companies and communities that have an active nest on their property so they can avoid disturbing the nests and eagles during breeding season. In the past 25 years, DNR staff had made management recommendations that protected more than 80 percent of all known eagle and osprey nests.

The federal Bald and Golden Eagle Protection Act and the Migratory Bird Treaty continue to provide protection for all eagle nests, nest trees, and habitat adjacent to nests.

Eagle populations nationwide and in Wisconsin declined due to habitat loss, decline in prey numbers (shorebirds and ducks), shooting because of perceived threat to livestock, and DDT exposure. Eagles were placed on the state and federal endangered species lists in the 1970s.

Eagles' recovery resulted from the banning of DDT nationally in 1972 (and in Wisconsin in 1969), prohibition of killing of eagles, improved water quality in lakes and rivers, nest protection, and reintroduction of eagles in some areas. Eagles were removed from Wisconsin's endangered species list in 1997 and from the federal list in 2007.

Citizens and organizations can help make sure these important annual surveys continue by sponsoring an eagle nest or purchasing a new eagle license plate, which provides a $25 annual donation to the Endangered Resources Fund. A new printable holiday card is online to make giving the eagle plate even easier and more fun.