MADISON -- From a pair of record breaking shortnose gar to one giant sturgeon, anglers made the most of their time on Wisconsin waters this summer.

As thoughts turn to a fall filled with big brown trout and monster muskies, the Wisconsin Department of Natural Resources is highlighting several notable successes by anglers during the summer of 2015:

Records are made to be broken and this year, the Wisconsin record for shortnose gar fell - twice. 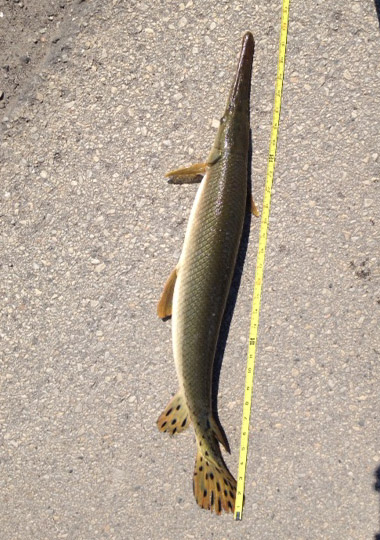 Scott Mathewson credits his son Devin for the record shortnose gar he caught in the Fox River in Kaukauna. Devin's previous scouting trips helped him hone in on just the right spot.
Photo Credit: contributed

On August 3, Colin Esser of Cassville was fishing Pool 11 of the Mississippi River, a widening of the river upstream from a lock and dam in Dubuque, Iowa. The area is home to both longnose gar and shortnose gar. Using a hook and line with live bait, Esser reeled in a 28.25 inch fish weighing 3 pounds, 2.6 ounces.

Esser's fish set a record but it would be short-lived. On August 22, Scott Mathewson bested the effort with a 31.75 inch fish weighing 4 pounds, 5.4 ounces.

Mathewson credits his son Devin for the catch in the Fox River in Kaukauna. Devin's previous scouting trips helped him hone in on a spot that is home to both shortnose and longnose gar. To hear the older Mathewson tell the tale:

"I stopped the truck along the river; Devin got out and walked up and down the river's edge looking for signs of gar. He pointed out in front of him and I parked the truck. I was pretty excited; I never caught a gar before and was looking forward to reeling one in....

"Devin got the rod I was going to use ready. He showed me the correct way to attach the minnow and he cast the first time for me to show me where and how to let the bobber drift. Right off the bat, my bobber starts to bob. Devin quickly started explaining to me how to let the fish take the bait for 15 to 20 seconds before setting the hook. I let time pass, set the hook and Bam! I just caught my first gar. That was fun -- I couldn't wait to get the minnow in the water again.

"It wasn't three minutes and Devin set the hook and pulled his first gar of the day in. We both had bites after that and missed fish, but it didn't matter, we were having fun.... I was on my seventh or eighth minnow when my drifting bobber stopped and started moving upstream. I knew I had one on. I opened the bail, let line pull off, watched and counted as the bobber stayed under the water. Then I closed my bail grabbed the rod tightly and set the hook.

"My rod bent, the line peeled off as I leaned back and reeled like crazy. Devin was really excited, saying, 'The state record, you caught the state record!' I didn't even have it to shore yet but because he has caught so many he could just tell by the way it was fighting. He grabbed the net and scooped it in. Oh man! He was right, it was big and heavy. We high-fived each other three or four times as we stood there in total excitement and disbelief."

The Mathewsons contacted a local DNR fish biologist about the process for recording a new state record fish. The process includes getting it weighed with a certified scale and witnessed, so they took the fish to a Festival Foods store where it tipped the scale at just over 4 pounds.

Scott Mathewson said he has a spot on the wall of his office where he plans to put the mounted fish, but he said it wasn't the idea of chasing a record that took him to the river that morning.

"I am very grateful to my son Devin for not giving up on trying to get me out fishing this year," Mathewson said. "Record fish or no record fish, we really had a great morning together. It's something I will remember forever!"

By now many avid anglers will have heard the story of 13-year-old David Jacobson of Garrison, Minn., who caught an 86-inch sturgeon on Yellow Lake in Burnett County on Sept. 12. What some may have missed in the coverage is that the family succeeded in releasing the fish. 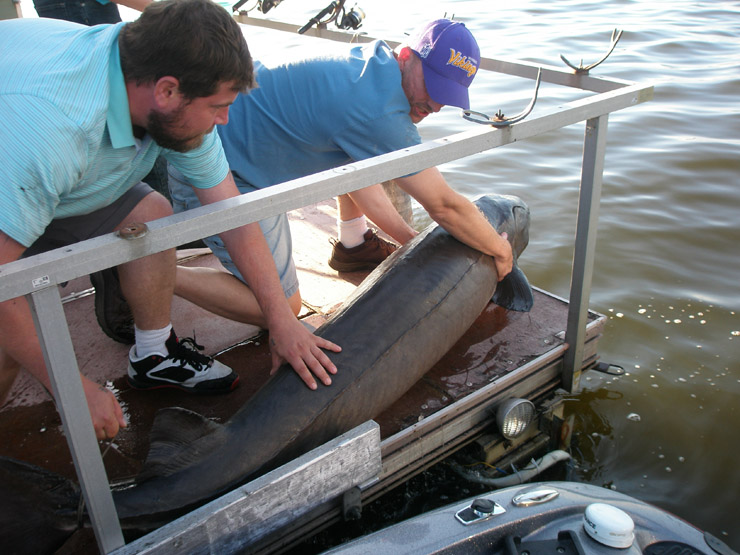 Thirteen-year-old David Jacobson of Garrison, Minn., caught this 86 inch sturgeon on Yellow Lake in Burnett County in September. What most people haven't seen is the successful release of the fish, shown here.
Photo Credit: contributed

When the family landed the fish after a half hour battle, they knew it was big but had no idea the state record was 79 inches. Due to the size of the fish and the scale, there was not a good way to get an accurate weight.

"After we landed it, another boat offered to weigh it, but...the weighing apparatus was insufficient for the length of this fish," said David's father, Erik Jacobson. "After talking to some locals that had witnessed our catch, one said he thought it was nearly 200 pounds! After thinking about it, it did take three men to get the fish high enough to get the tail rope on the scale. After the attempt, the fish swam away strong upon release, so we felt really good about that."