ASHLAND, Wis. - Information gathered in the first season by more than 700 volunteers documenting bird breeding activity in Wisconsin found an impressive array of birds in the state, including eight species nesting here that weren't found 15 years ago and range shifts in others such as the wild turkey.

"With only one breeding season down and four to go it's too early to say how most species' populations are changing, but we're very pleased with participation so far and what volunteers have been able to document in these early stages," says Nick Anich, lead coordinator of the Wisconsin Breeding Bird Atlas survey and conservation biologist with the Wisconsin Department of Natural Resources.

"Turkeys are on the move and are now found in every corner of the state. We're also seeing whooping cranes and seven other species that weren't nesting here 15 years ago." 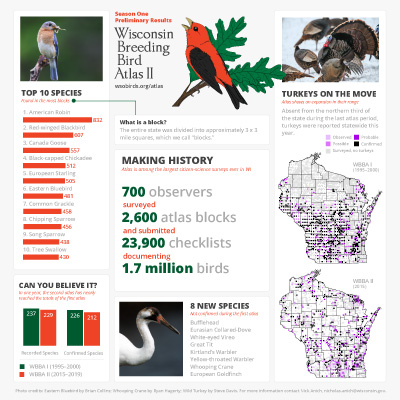 With observations slowing to a trickle as the bird breeding season ends and many birds now migrating south, Anich and other leaders of the Wisconsin Breeding Bird Atlas II are taking stock of data recorded this season.

"A lot of people are getting outside and having fun finding birds, and the project is generating a dataset that is really going to help inform management and conservation of birds and their habitats for the next generation," Anich says.

The survey will continue for the next four years to document the abundance and location of Wisconsin's breeding birds. The project is led by the Wisconsin Society for Ornithology, the Western Great Lakes Bird and Bat Observatory, the Wisconsin Bird Conservation Initiative, and DNR, but volunteers are what make the project run, Anich says.

The survey is the follow-up to a first Atlas conducted from 1995-2000. Information collected during that period is still used in species conservation and land management planning today, but changes in habitat and seeming shifts in bird populations make it important to get a more current picture of Wisconsin's breeding bird population, Anich says.

Survey participants collect data by observing birds, noting the date and location, and entering their sightings online into an eBird database specially developed for the project by the Cornell Lab of Ornithology. The records are then checked by Anich and volunteer ornithologists. When the project is completed the data will be published in a hard-copy book and online, and the dataset will be available for use by researchers, land managers, and others working to conserve birds and their habitats.

Survey Shows Species on the Move

One of the most dramatic results from the 2015 survey can be seen in the wild turkey, which has experienced a marked increase in range since the last survey. Absent from the northern third of the state then, turkeys are now found statewide, according to Ryan Brady, Wisconsin Bird Conservation Initiative bird monitoring coordinator and the atlas survey's science leader.

Several new species were confirmed this year that were not found during the first survey. A few of these species, such as whooping crane and Kirtland's warbler, are endangered species taking steps toward population recovery through the aid of conservation efforts. Other species, such as European goldfinch and great tit, are non-native species that, as popular cage birds, have been introduced into the wild from captivity, Brady says.

Getting Involved in Surveying Birds

While bird breeding activity is mostly over for this year, Brady encourages interested people to learn more about the effort and get ready to join in next year when the breeding season starts up again.

"People at all skill levels of birding can participate," he says. "We encourage you to visit our project website at wsobirds.org/atlas and learn how to contribute your own observations or simply explore preliminary project results on the Atlas eBird webpage." That page is found at www.ebird.org/atlaswi.

The public is invited to a live chat this Thursday, October 1 at noon as DNR birding experts discuss the preliminary results of the breeding bird atlas project. They will also answer questions about fall bird migration. To join the conversation, people can go to the DNR website, dnr.wi.gov, and click on "Ask the Experts" in the Popular Links section.