The trout occupy Beaver Brook, the largest class 1 trout stream in Washburn County and home to naturally reproducing populations of brown and brook trout. In 2003, DNR and DOT partnered to purchase property known as Badger Cranberry that holds the small stream as an addition to the DNR-owned Beaver Brook Wildlife Area. 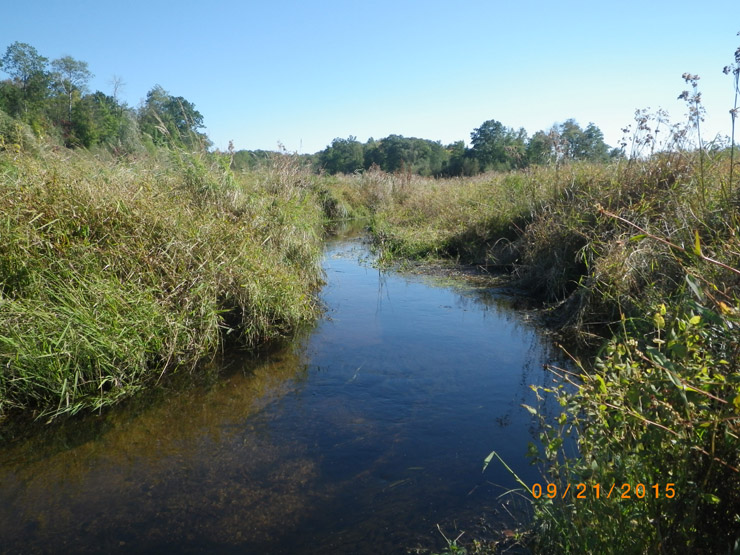 The 541 acre addition to Beaver Brook contained 81 acres of old cranberry marsh and a 65 acre flowage that was historically the upper reaches of the trout stream. In the summer of 2008, removal of the flowage dam, dikes, and draining of the cranberry marshes took place in hopes of restoring the trout stream, wetlands, and a native plant community.

"Initially, it was believed the area would not be able to sustain trout due to warm water temperatures," said Craig Roberts, DNR fisheries biologist for Washburn County. "Even though we didn't think trout could survive in the area, we believed rehabilitation work would increase water quality and benefit downstream trout populations. After several years of monitoring, we were all pleasantly surprised to find that trout appear to be settling in."

Following dam removal, water temperatures have dropped 9 degrees to a yearly average of 63 degrees Fahrenheit in 2014, Roberts said. However, summer temperatures can range into the 70s which is considered marginal for native brook trout to survive. In 2011, a fish survey showed no trout within the old flowage bed.

Now, seven years after restoration efforts began, two 6 inch brook trout were found in early May of 2015. The survey was the first time trout had been found in that restored section of stream. To confirm the trout were not errant visitors, fisheries staff again surveyed the stream in late summer and found seven additional brook trout.

"The latest survey found trout that ranged from 2.5 to 7.5 inches, suggesting multiple ages of trout are residing in the area," Roberts said. "The fish were living in 72 degree water at that time, which is considered warm for brook trout. The fish are likely using the large amount of spring activity to survive in the area."

Though the finding doesn't mean trout are permanently established here, it is a positive sign to see trout present in the restored area, Roberts said. Ultimately, the expansion of trout into the restored section of Beaver Brook will strengthen the overall population and lead to additional trout fishing opportunities.

To learn more about the cranberry marsh restoration effort, search the DNR website, dnr.wi.gov, for "Beaver Brook Wildlife Area." Questions about the local fishery can be directed to Craig Roberts at 715-635-4095 or email: craig.roberts@wisconsin.gov.