STURGEON FEST TO CELEBRATE A DECADE OF PROGRESS

MILWAUKEE - Efforts to return lake sturgeon to the Milwaukee River will enter a second decade with growing support and new evidence of progress thanks to a partnership involving the Wisconsin Department of Natural Resources, Riveredge Nature Center and Fund for Lake Michigan, among others.

The efforts will be celebrated at the 10th anniversary of Sturgeon Fest - a free, family oriented event on Saturday, Sept. 26 from 11 a.m. to 3 p.m. at Lakeshore State Park near the Summerfest grounds. This year's event includes a free presentation by Scott Sampson, also known as "Dr. Scott," a dinosaur paleontologist at the Denver Museum of Nature & Science who serves as host and science adviser of the Emmy‐nominated PBS KIDS series Dinosaur Train.

"Lake sturgeon are sometimes referred to as living fossils but despite the 150 million year history of the species, they've faced a variety of challenges in modern times," said Jessica Jens, executive director of Riveredge Nature Center. "In partnership with DNR and the Fund for Lake Michigan, our past decade of work to reintroduce a naturally reproducing population of sturgeon to the Milwaukee River has shown tremendous progress and we are excited to welcome everyone to Sturgeon Fest."

The event features the opportunity for youth and adults to sponsor and release young sturgeon into Lake Michigan. The fish, hatched from eggs collected on the Wolf River, have been carefully raised at a streamside rearing facility operated by Riveredge and DNR where they have imprinted on the waters of the Milwaukee River. 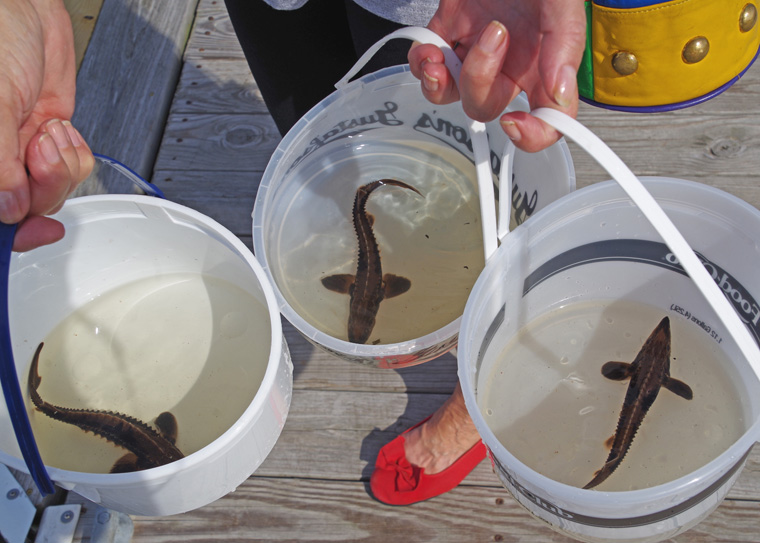 Lake sturgeon hatched from eggs collected on the Wolf River were raised at a streamside rearing facility operated by Riveredge and DNR so they imprint on the waters of the Milwaukee River.
WDNR Photo 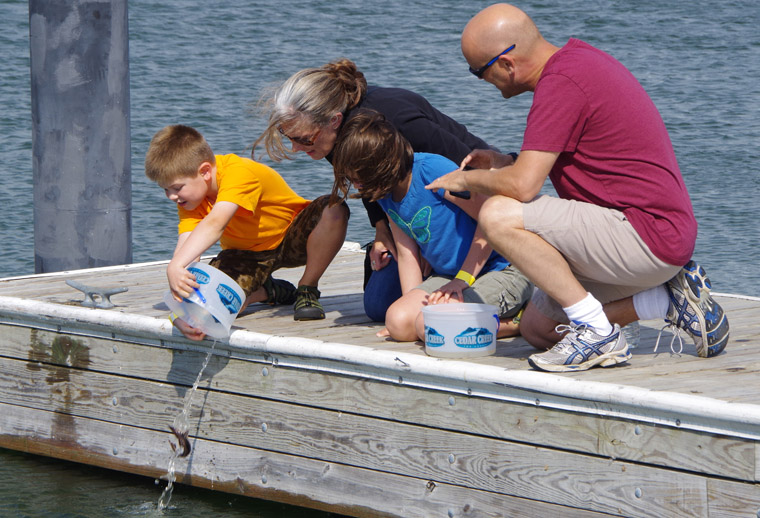 The festival offers an opportunity for youth and adults to sponsor and release young sturgeon into Lake Michigan.
WDNR Photo

If all goes according to plan, the fish will return to the river for spawning - a day that may well come before the 25-year Return of the Sturgeon project officially concludes. Brad Eggold, DNR southern Lake Michigan fisheries team supervisor, said the department's lake sturgeon juvenile assessment work shows many of the more than 7,500 sturgeon released over the past decade appear to be doing well.

In July, fisheries team members caught and released a 5-year-old sturgeon that measured 35 inches and weighed nearly 10 pounds. The fish, which has been growing about 6 inches per year, was the 57th lake sturgeon captured in the Milwaukee River and harbor area and adds to evidence that a number of the stocked fish are staying nearby and using the harbor as a nursery.

Fisheries team members are able to identify the age and origin of the stocked fish thanks to tiny passive integrated transponder - or PIT tags - inserted into the sturgeons before they are released. The pencil-lead sized tags and nets used to conduct the juvenile sturgeon assessments come thanks to additional support from the U.S. Fish and Wildlife Service and Great Lakes Fishery Trust of Lansing, Mich.

"During the past year, we also picked up a young sturgeon that was reared more than 100 miles away in Kewaunee at the C.D. "Buzz" Besadny Anadromous Fish Facility and released at a sturgeon sponsorship event there," Eggold said. "We're pleased to see that conditions in Lake Michigan appear to support survival of the fish; habitat work on the Milwaukee River will further improve the odds for successful reproduction."

Given current growth rates of the fish, some of the males are likely to reach sexual maturity in the next five to six years and the females within 10 to 15 years. That timeline is not lost on Vicki Elkin, executive director of the Fund for Lake Michigan, which has provided nearly $150,000 in the past three years to restore spawning habitat and support improvements to the streamside rearing facility that should lead to higher survival rates for the fish.

"We're pleased to work in partnership with Riveredge and DNR on projects including construction of a spawning reef in the Milwaukee River that now provides more than an acre of prime habitat for sturgeon as well as walleye," Elkin said. "Healthy populations of lake sturgeon were found in Lake Michigan as recently as the late 1800s and we hope our shared efforts contribute to natural reproduction in the decade ahead. Lake sturgeon serve as an important indicator of ecosystem health, so work to improve habitat for sturgeon benefits many species."

Families and individuals interested in sponsoring a sturgeon for Sturgeon Fest are encouraged to register online before 2 p.m. on Friday, September 25, although it will still be possible to sign up at the event. The sturgeon are typically released between noon and 3 p.m. following a short presentation and a blessing of the fish by a Native American representative.

The free, family oriented presentation by Dr. Scott runs from 2 to 3 p.m. at the Johnson Controls World Stage on the Summerfest Grounds, a short walk from the sturgeon release site. Free parking for Sturgeon Fest is available at designated Summerfest parking lots and a shuttle to Lakeshore Park will be available.