BLACK EARTH, Wis. - A Monroe man who organizes weekly volunteer workdays to help care for state natural areas in south central Wisconsin has been named Volunteer Steward of the Year. 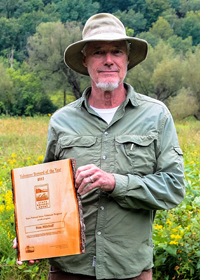 Tom Mitchell of Monroe received the award on Aug. 29 at the Pleasant Valley State Natural Area in Dane County during a volunteer appreciation potluck sponsored by the Department of Natural Resources.

The award recognizes volunteers for their outstanding work and commitment to help manage state natural areas , a system of 673 sites across Wisconsin that contain some of the best remaining examples of Wisconsin's wetlands, woodlands, prairies and oak savannas. While DNR owns two thirds of these special places, one-third are owned by more than 50 partners ranging from The Prairie Enthusiasts to the U.S. Forest Service to The Nature Conservancy.

Mitchell's efforts have benefitted state natural areas in Green and Rock counties, where he is a leader in The Prairie Enthusiasts-Prairie Bluff Chapter, according to Jared Urban, a DNR conservation biologist who coordinates the State Natural Areas volunteer program.

The Prairie Enthusiasts, or TPE for short, help manage state and University of Wisconsin-Arboretum owned properties as well as TPE-owned properties where Mitchell organizes weekly workdays and spends a majority of his days working.

"You will often find Tom working with others in the field, forming friendships and leading by example," Urban says. "Lots of people have learned from his knowledge and infectious interest by working with him directly. He is unafraid to try new things, teach new people, allow others to lead, or blaze his own trail even when things get tough."

Urban says that Mitchell works year-round doing a variety of tasks, but his recent accomplishments include work at Muralt Bluff Prairie State Natural Area , where his chapter put in more than 400 hours in 2014. Mitchell collected pounds of seed for prairie plantings on DNR and TPE properties, removed garlic mustard and other herbaceous invasive weeds, sumac and other woody plants, and led field trips.

In addition to that work, Mitchell has participated in numerous workdays on publicly owned state natural areas across Green and Rock counties, Urban says. He also has been a valuable contributor and advocate for the SNA volunteer program since its beginning in 2011.

Mitchell says he was surprised by the award because "there are so many people doing good volunteer work on SNAs and Jared has done a wonderful job of organizing them."

Since he got hooked on prairie restoration in the 1990s, he couldn't wait to retire, and now that he's retired, "this has become what I do," Mitchell says. "It's outdoors, healthy, and a nice combination of physical and mental, trying to figure out how you are going to manage the prairie. I can't imagine what my life would be like without them. "

Muralt Bluff Prairie State Natural Area is particularly important to him and other prairie enthusiasts because it's where the prairie movement in southern Wisconsin got started and because the site boasts a rich prairie ecosystem, full of insects, grassland birds, and other prairie plant and animal species.

Wisconsin's State Natural Areas volunteer program has since grown to include volunteers who help care for more than 20 sites mostly in south central and south eastern Wisconsin. In 2014, such volunteers donated more than 2,400 hours of physical labor to maintain state natural areas. Learn more about the volunteer program in "Showing a Passion for Wild Places" in the June 2015 Wisconsin Natural Resources magazine and find a listing of upcoming volunteer workdays on the SNA volunteer page of the DNR website.