Entries on display at the Wisconsin State Fair

MADISON - Talented artists from all corners of the state submitted a total of 28 pieces of wildlife artwork for this year's Wisconsin wild turkey, pheasant, and waterfowl stamp design contest. Judging took place on Friday, July 3 and the top three pieces of artwork in each division will be on display in the Natural Resources Park at the 2015 Wisconsin State Fair.

Those interested in wildlife conservation and art are encouraged to visit the park to check out the winning designs and learn more about the accomplishments of Wisconsin's wildlife stamp programs.

A painting of a tom turkey in a Wisconsin farmland setting, submitted by Robert B. Andrea of Spooner, received first place in the 2016 Wild Turkey Stamp design contest. While Andrea has submitted artwork in past wildlife stamp design contests, this is his first time winning a blue ribbon. Andrea has been painting and drawing since he was 7 years old. While his skills are mostly self-taught, both his mother and his uncle provided artistic inspiration. 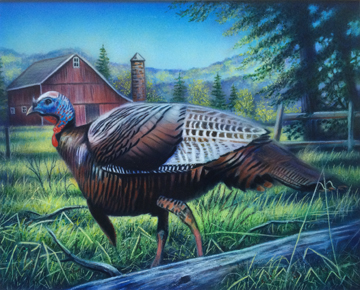 2016 Wild Turkey Stamp by Robert B. Andrea of Spooner

Andrea and his wife enjoy taking pictures of Wisconsin wildlife and scenery, and his winning painting of a tom turkey in a farmland scene was inspired by a turkey crossing the road during one of these excursions. According to Andrea, the opportunity to spend time outdoors enjoying nature is a big part of why he is so passionate about wildlife artwork.

Andrea particularly admires the work of Norman Rockwell and wildlife artist Philip R. Goodwin, and his advice for beginning artists is to draw and paint what they see, follow their instincts, and keep working hard. Andrea served as a composite artist for the police force, where he was an officer for over 30 years.

Doughty has been painting since around 1970 -- while he was awarded a scholarship to the University of Chicago, he remained at home to work for his father and ultimately joined the U.S. Navy at age 18. During his service he worked as an artist and prepared signs and port of call books while stationed on an aircraft carrier in the Mediterranean.

Doughty's own paintings, including submissions in this year's stamp design contest, are heavily inspired by the many sketches he has created throughout his life and pictures taken during his travels. Doughty particularly admires the work of artists David Maass (a winning artist for the Federal Duck Stamp), Martin R. Murk and William J. Koelpin. Doughty advises novice artists to practice as much as they can and maintain their individuality.

Duck and goose hunters are required to purchase the $7 Wisconsin Waterfowl Stamp in order to hunt waterfowl in the state - proceeds are used to manage, restore, and protect waterfowl habitat in Wisconsin and Canada.

Please note that an electronic "stamp approval" is printed on the licenses of wild turkey, pheasant and waterfowl hunters at the time of purchase. Hunters will not receive an actual stamp unless they request it. DNR service centers have the state stamps available free of charge for hunters with current stamp approval. Anyone else interested in collecting the Wisconsin wildlife stamps may purchase one directly from the DNR. For more information, call the DNR Call Center at 1-888-WDNRINFo (1-888-936-7463) or visit dnr.wi.gov and search keywords "wildlife stamps."