Reservations for new cabin accepted as of August 1, 2015

BELGIUM, Wis. - People with disabilities can explore and enjoy the great outdoors by camping at the newest of the specially designed and equipped "Cabins in the Woods" at Wisconsin state parks and forests. 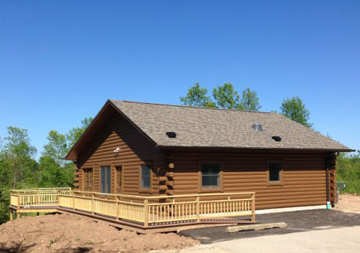 Harrington Beach State Park will begin accepting reservations for the new cabin for the remainder of the 2015 camping season beginning August 1, 2015, with occupancy to follow beginning August 10, 2015. Cabin occupancy preference will be given to those with the greatest level of physical disability.

With the opening of this cabin, the Wisconsin state park system will offer eight cabins with accessible kitchens and bathrooms and bedrooms, and two accessible one-room rustic cabins. The cabins have become extremely popular in recent years, and are often booked well in advance for weekends and holidays.

The fully equipped cabin has kitchen counters that allow wheelchairs to roll under them, a bathroom with roll-in shower, family and dining areas and a bedroom large enough for wheelchairs and attendants to move about. The campers sleep on hospital-style beds with Hoyer lifts nearby if they are needed. Additional sleeping space for family members is also provided on a pull-out bed in the living room and on cots on the screened porch.

The Friends of Harrington Beach State Park (exit DNR) and the Wisconsin DNR have partnered together to be able to provide this new cabin. The cabin has been built through generous donations and gifts of building funds, building plans and furniture and equipment from a wide variety of organizations and businesses.

Reservation forms and a calendar of available dates will be available on the state parks pages of the Department of Natural Resources Web site at dnr.wi.gov/, choosing "Parks and Recreation," and then "Accessible Cabins." Applications should be mailed to Harrington Beach State Park, 531 County Road D, Belgium, WI 53004.