BOULDER JUNCTION, Wis. - Monday, June 29, marks the 100th birthday of aviation for the state Department of Natural Resources. It was on that date in 1915, that the first forest patrol flight to occur anywhere in the world took place in Wisconsin. 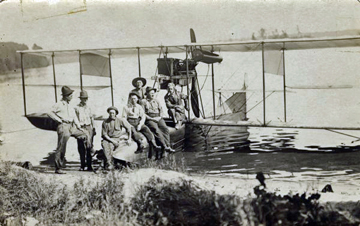 During that flight the idea occurred to Vilas that a pilot could scan the landscape for the wispy columns of white smoke that signaled wildfire with far greater range than a forester in a lookout tower. He offered to make daily flights that summer, free of charge, in exchange for a commission as the world's first flying fire ranger.

That commission was swiftly granted by the Wisconsin Conservation Department, a precursor to the DNR. Within two years, the "Wisconsin Plan" for forest protection was adopted by Canada and other countries and by 1919 the U.S. Forest Service had introduced aerial fire patrols.

A century later, DNR pilots are still flying fire detection routes, generally during hot, dry weather in the early spring, before "green up," when the ground is covered with dried grasses and brush and tall, thirsty pines that can ignite as easily as a match.

Today's DNR pilots do much more than spot fires. They are highly trained specialists who stay airborne above the flames providing a wide range of detailed reports to firefighters on the ground, information that not only makes fire suppression faster but safer. They make sure firefighters have an escape route should the wind shift.

And this is only one of many services DNR pilots now provide. Working with law enforcement agencies across the state, they play a key role in guarding public safety. DNR pilots, for instance, will fly at night, at low altitude, using a forward-looking infra-red sensor to search for the heat signal of a lost child or a missing hunter.

They work for wildlife officials, tracking mammals, birds and even fish from the sky, either visually or using radios to pick up signals from transmitters implanted by biologists to study the movements of various wildlife species.

DNR pilots search for signs of forest diseases. They provide critical data during and after floods and other natural disasters. Experts in aerial photography, they provide a wide range of services to public land managers and DNR specialists working on spills and other environmental problems.

"I rest easier knowing our highly-skilled pilots are always available on short notice when we need them," said DNR Secretary Cathy Stepp. "Few people realize how important they are to our mission, to protect and enhance our natural resources and to guard public safety. Let me be the first to wish our wonderful aviation team a very happy 100th birthday." 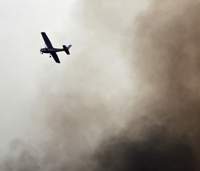 Currently, there are 10 full-time and eight part-time, limited-term DNR pilots. There are two full-time pilots stationed at each of five DNR hangars located in Madison, Eau Claire, Siren, Rhinelander and Oshkosh.

They must be skilled aviators before joining DNR. Many have served in military aircraft. They include former jet pilots, wilderness bush pilots and flight instructors, and sometimes all of these. Now they are natural resource pilots, granted a Federal Aviation Administration exemption allowing them to fly at low altitudes.

A historic footnote: Jack Vilas made his historic flights while vacationing in his beloved Northwoods where he was a devoted hunter and fisherman. He kept his flying boat on Trout Lake in Vilas County. The county, created by the state legislature in 1893, was named for Jack's uncle, William Vilas of Madison, a Civil War veteran who served as U.S. Postmaster, as the U.S. Secretary of Interior and finally as a U.S. senator from Wisconsin.

Jack Vilas had no interest in such industrious work. The son of a wealthy industrialist, he devoted his life to adventure - hunting and fishing, driving race cars and then piloting one of the world's first airplanes. He was the first pilot to fly cross Lake Michigan. A man of many talents, he turned out to be a superior fire warden.

There were no radios back then, so when he spotted a fire, he would land at Trout Lake and phone nearby forestry headquarters to report it. He would give a compass direction and a visual estimate of distance made without any instrumentation whatsoever. Foresters racing to a fire Vilas said was 40 miles from headquarters would be amazed when this turned out to be a precise estimate.

To his credit, Vilas set a standard of excellence that lives on today in the public servants who fly for the DNR.

For more information: see "A centennial year for DNR aviation" in the June issue of Wisconsin Natural Resources magazine; "Celebrate the first fire patrol" and "So you want to be a conservation pilot" on the DNR's Environmental Education for Kids website; and Wisconsin fire history on the DNR website.