Season opens in northern zone waters on May 23

GREEN BAY, Wis. -- While size and bag limits are the subject of frequent discussion among many anglers, there's one group of fishing enthusiasts who are relatively unaffected by such matters: musky hunters.

A glance at online fishing forums indicates most musky anglers would never keep a musky unless they believed the fish was unlikely to survive or it was a record fish. Steve Hogler, a senior fisheries biologist with the Wisconsin Department of Natural Resources, says his experience with musky anglers on Green Bay and the Menominee River bears this out.

"Over time, our creel surveys have indicated fewer than 10 musky per year are actually being harvested from Green Bay," Hogler said. "For the anglers who have kept the fish, either it's the largest fish they've ever caught in their life or they have a firm belief that it couldn't be released healthy, maybe because it swallowed the bait too far. When we went to increase the size limit from 50 to 54 inches in 2014, we had very few complaints from musky hunters because the anglers already viewed it as a trophy fishery." 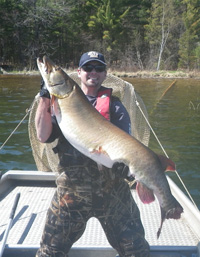 Musky anglers heading to northern Wisconsin for the season opener this Memorial Day weekend have good reason for optimism this year - and this 49.3 inch fish from Trout Lake shows why. DNR fisheries biologist Lawrence Eslinger captured the fish, which weighs more than 40 pounds, during a survey of the Vilas County lake about two weeks ago. The fish is now back in the lake.
WDNR Photo

Musky fishing will be the focus of many anglers throughout the northern region of the state this Memorial Day weekend. The northern zone season opens Saturday, May 23 and extends until Nov. 30 on inland waters north of Highway 10 including Green Bay and most of its tributaries. On the Menominee River, the season runs from May 15 to Nov. 30 while on inland waters south of Highway 10, the musky season opened May 2 and runs to Dec 31.

While the size limit on most state waters is 40 inches, the 54 inch size limit on Green Bay and the Menominee River distinguish the region as one of a select few in the world capable of producing such large fish. Ample forage in the form of gizzard shad, suckers and alewife help the muskies grow quickly and they typically reach sexual maturity at age 4 or 5 for the males and 7 or 8 for the females.

"The sheer biomass in Green Bay is incredible and it's dominated by forage fish," Hogler said. "Ideally, you'd like a 20-to-1 ratio of forage to predators and I'm sure it's much higher than that. That means the great walleye, bass and musky fishery that anglers are experiencing now probably will be there for the foreseeable future."

Without a unique partnership involving DNR and half a dozen private sport fishing clubs, however, the trophy musky fishery would not exist. Musky were native to Green Bay but vanished from the region due to overfishing, pollution and habitat loss in the early 1900s. In the mid-1980s, DNR fisheries managers identified the return of a musky population to the region as an important goal, but it wasn't until private organizations stepped in with funding and volunteer support that the effort could progress.

Hogler said Dave's Musky Club in Kaukauna, Packerland Musky Club in Green Bay, Titletown Muskies Inc., in Green Bay, Muskies Inc. in Sheboygan and the Musky Clubs Alliance of Wisconsin all have made critical contributions to an effort that has resulted in some 155,000 muskies being stocked into Green Bay since 1989. The involvement of the clubs continues, with some providing support for rearing operations after the fish are spawned and the eggs taken to the Wild Rose State Fish Hatchery and the C.D. "Buzz" Besadny Anadromous Fish Facility near Kewaunee.

"We're grateful for the continued support of these groups and we saw 15 or 20 club members observing as we conducted our spring survey work along the shores of the Fox River," Hogler said. "They were extremely happy to see the fish and one of the fish we picked up had a Floy tag from 16 years ago. The type of data we are able to gather from these tagged fish is very useful to our research as we work to understand the age and size structure of the muskies."

Beyond additional stocking efforts now underway to introduce fresh genetics from Great Lakes spotted musky out of Lake St. Clair and the Detroit River, more woody debris along the river shorelines and aquatic vegetation likely is needed to facilitate spawning and provide places for young muskies to hide.

In the meantime, however, the waters of Green Bay are supporting a true trophy fishery in which fish larger than 50 inches are commonly caught by anglers. The question, said Randy Schumacher, DNR eastern district fisheries supervisor, is whether the region will yield a record fish anytime soon. 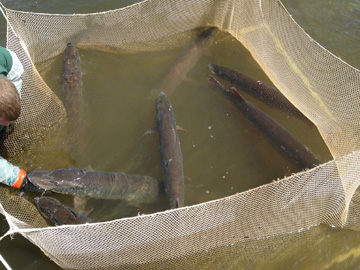 More world record muskies have been landed in Wisconsin than anywhere else and a 69 pound, 11 ounce fish taken from the Chippewa Flowage claims the current state and world records. While conditions in Green Bay are uniquely suited for producing large fish, the strong catch and release ethic among anglers in the region may prove to be a factor in how long the current record stands.

"There's no other place in Wisconsin with more fish that musky like to eat than Green Bay and it's a good possibility that there are record fish out there right now," said Schumacher, a 39 year veteran of the department who plans to retire later this month and spend more time fishing. "But given the sense of stewardship among musky anglers, that record may not be broken anytime soon."

To learn more about muskies, search the DNR website, dnr.wi.gov, for "fishing musky."

Buying a fishing license is easy and convenient over the Internet through the Online Licensing Center on the DNR website, at all authorized license agents, at DNR Service Centers (Hours for service centers vary; check the DNR website for service center days and hours of operation; DNR Service Centers are not open on Saturdays), or by calling toll-free 1-877-LICENSE (1-877-945-4236).