MADISON -- With less than two weeks to go until the general season fishing opener Saturday, May 2, Wisconsin Department of Natural Resources fisheries experts are reporting many reasons for optimism.

Statewide trout populations appear healthy, largemouth bass numbers remain strong and an anticipated three fish daily bag limit for walleye in Ceded Territory waters will mean new opportunities for anglers in all regions of the state. DNR fisheries biologists say the warmer weather so far this spring has moved up the timetable for spawning activity statewide, with several rivers flowing into Green Bay reporting historically strong runs of walleye that have drawn early season anglers from throughout the Midwest.

Dozens of anglers take to the water or wait for an opening to try their luck during early season walleye fishing on the Peshtigo River, April 10, 2015. - DNR Photo
WDNR Photo

"During our electrofishing surveys, in an hour and a half we were getting 250 walleye and the average size was 22 inches at least," said Mike Donofrio, a DNR fisheries team supervisor based in Peshtigo. "We've been seeing similar numbers and size structure on the Menominee, Peshtigo, Oconto and Fox rivers - these are historically high numbers and continue a trend we've seen for the past five years. People have been lining up along the shores and given the low gas prices, people are driving from Iowa, Minnesota and all over Wisconsin. Local hotels have been filled."

The early season on major tributaries to Green Bay started March 2 and runs to May 1 with a one fish daily bag limit, but the action has been drawing anglers eager for the experience. After spawning, the fish typically move out of the river and begin looking for food - good news for anglers who will be working the shoreline in the weeks ahead. 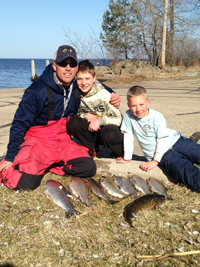 "These fish are voracious predators and they put on the feedbag after spawning," Donofrio said. "In addition to the walleye, we are also hearing reports of very good brown trout fishing on Green Bay (where the season is continuous). Between the walleye and the brown trout, it's shaping up to be a great spring and summer."

Anglers also have much to look forward to in northern Wisconsin, where a new three walleye daily bag limit is anticipated to be in effect for the first time on most lakes and rivers in the Wisconsin Ceded Territory. The rule replaces the previous system of annually adjusted bag limits with equally protective minimum length and slot limits to manage angler harvest of adult walleye at levels that can be supported over time, said Mike Vogelsang, DNR's north district fisheries supervisor.

"On most lakes, the three bag daily limit includes a 15 inch minimum combined with a protected 'slot' of fish between 20 and 24 inches and one fish greater than 24 inches,'' Vogelsang said. "The idea behind the protected slot is to help conserve walleye that are just entering their prime spawning years. The three bag limit was developed in response to angler feedback seeking more consistency throughout the Ceded Territory."

The daily bag limits of three walleye apply to an individual lake. An angler can go to another water and harvest an additional two fish to meet the total daily bag limit of five in Wisconsin waters. However, the angler cannot have more than three fish in their immediate possession and must take the three fish harvested from the first lake back to a house or cabin before traveling to the next lake.

In west central and southwest Wisconsin, anglers interested in trout will find larger fish this year, although overall numbers are down from their recent historic highs, said Heath Benike, a DNR fisheries operations supervisor based in Black River Falls.

"The streams are in really good condition," Benike said. "We had a period of probably eight to 10 years where we had super high densities and the past several years the numbers are down just a bit but the size structure is going to be better because of this. There are still a lot of fish out there."

Bass anglers also will have reason to cheer as largemouth bass populations are running at or near historic highs, Benike said.

"If you are a bass angler, the largemouth bass populations have never been stronger," he said.

Largemouth bass populations have become so abundant in some waters that largemouth bass fishing regulations have been liberalized in an effort to encourage harvest of small, surplus fish in the population. It should be noted that there is a catch and release season for smallmouth bass in parts of northern Wisconsin that runs from May 2 to June 19.

Buying a license is easy and convenient over the Internet through the Online Licensing Center on the DNR website at all authorized sales locations, or by calling toll-free 1-877-LICENSE (1-877-945-4236).