MADISON -- A color coded system that simplifies inland trout regulations will be up for consideration by those attending the Wisconsin Department of Natural Resources Spring Fish and Wildlife Public Hearing on April 13. 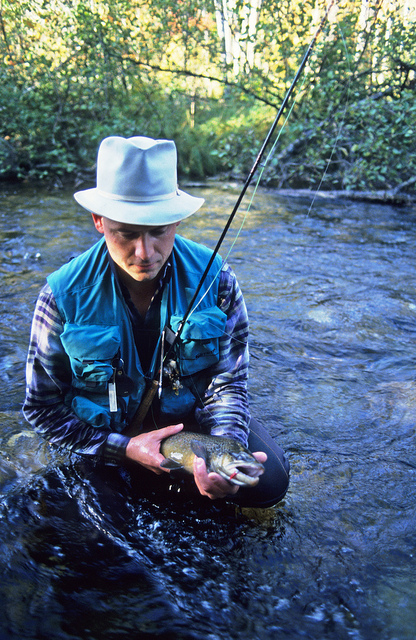 The proposed rules, which will be presented at hearings held in conjunction with the Wisconsin Conservation Congress annual meetings, increase fishing opportunities for anglers on Wisconsin's 13,000 miles of trout streams. Scot Stewart, district fisheries supervisor for the Wisconsin Department of Natural Resources, said the proposal received a positive reception at 10 public meetings held statewide last fall.

"Through careful management and angler support, trout populations have improved statewide since the rules were last updated in 2003," Stewart said. "During the 2014 public meetings, anglers expressed enthusiasm for the new rules because they will continue to support healthy trout populations while providing more quality fishing opportunities."

Since 2011, DNR has held 31 public meetings, conducted three surveys including a survey of lapsed trout anglers and convened additional task force meetings focused on trout. The resulting proposal would reduce the number of special trout regulations from more than 40 to 12. The proposal also would create more uniformity of regulations on trout streams and within small geographic areas.

The proposed system also would use color-coding resembling a stoplight to guide anglers. Under the system:

Changes also are proposed to the season dates for inland trout fishing. The 2015 early catch and release season runs from March 7 to April 26 with a five-day closure before the regular season fishing opener on May 2. The proposal would extend the opening of the early catch and release season to the first Saturday in January and would run to the day before the regular fishing opener with no five-day closure period. The fall season would extend from the current Sept. 30 to Oct. 15. Extending the season in the fall will provide more opportunities for catching or harvesting trout without affecting spawning or generating user conflicts along streams.

If the proposed rules move forward, they would take effect for the 2016-2017 season. For those who cannot attend the spring fish and wildlife public hearings, written comments on any proposals may be submitted before April 13 to Kate Strom Hiorns, PO Box 7921, Madison, WI 53707-7921 or kathryn.stromhiorns@wisconsin.gov.

To learn more about the proposal, search the DNR website dnr.wi.gov for keywords "Spring Hearings." The website provides a list of proposals for consideration including the trout package.